Trees that line the parks in Maryland, particularly in Cecil County, are a beautiful sight to behold. Tourists just love how majestic they are and how lovely it feels to be close to nature when visiting the area. However, the tranquil beauty will suddenly be replaced with curiosity and a sense of morbidity as one takes a long walk amongst the trees. Out of all the parks found in the county, nothing can be creepier than Perryville Community Park.

Hundreds of these trees bear cryptic messages that are carved onto the barks. Over time, the carvings on the tree barks have grown in size, capturing the attention of anyone that happens to pass by, seemingly asking them to stop and look. The site that the trees grow on was once a part of Perry Point Veteran’s Administration Medical Center, a psychiatric and rehabilitation facility that catered mostly to U.S. military veterans.

During the patients’ time at the hospital, some of them walked the grounds and carved their marks, composed of disturbing thoughts, for everyone to discover today. Even though the carvings on trees became popular among those who like all things creepy, not many Maryland residents know about them, according to Cecil Daily.

The Perryville Community Park in Maryland is home to trees with eerie carvings. 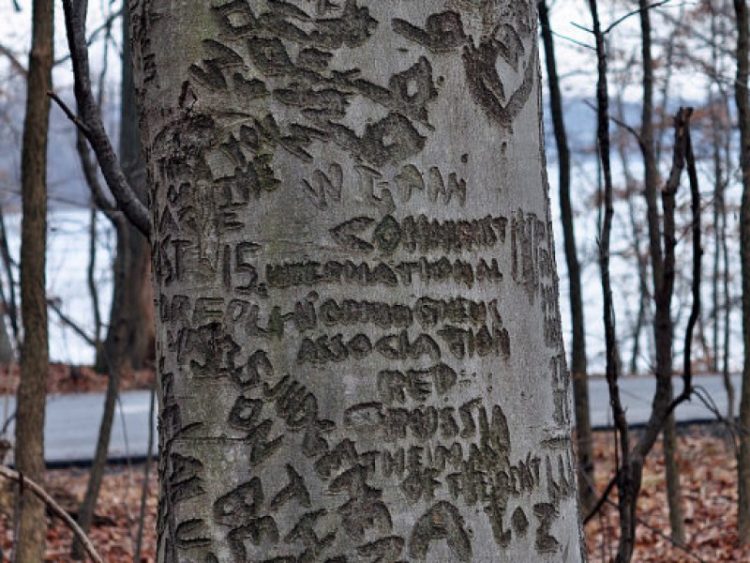 The site is popular among tourists, especially those who like creepy things. 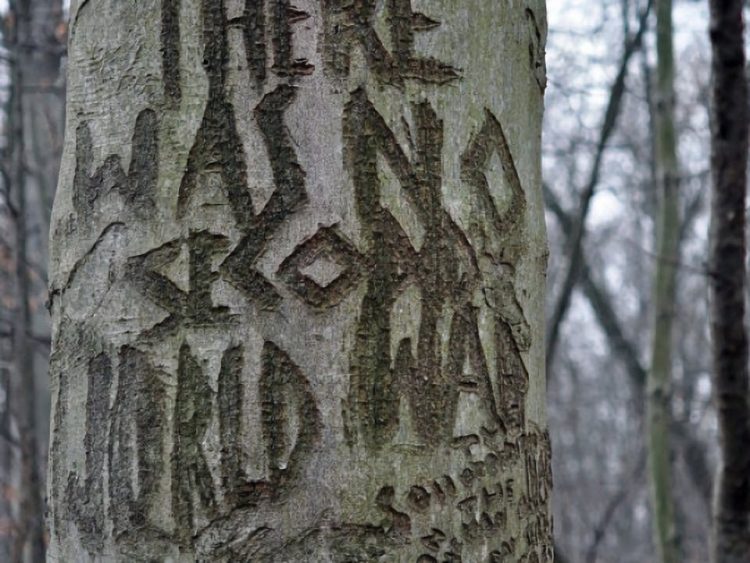 The site was once a hospital and psychiatric ward for U.S. military veterans. 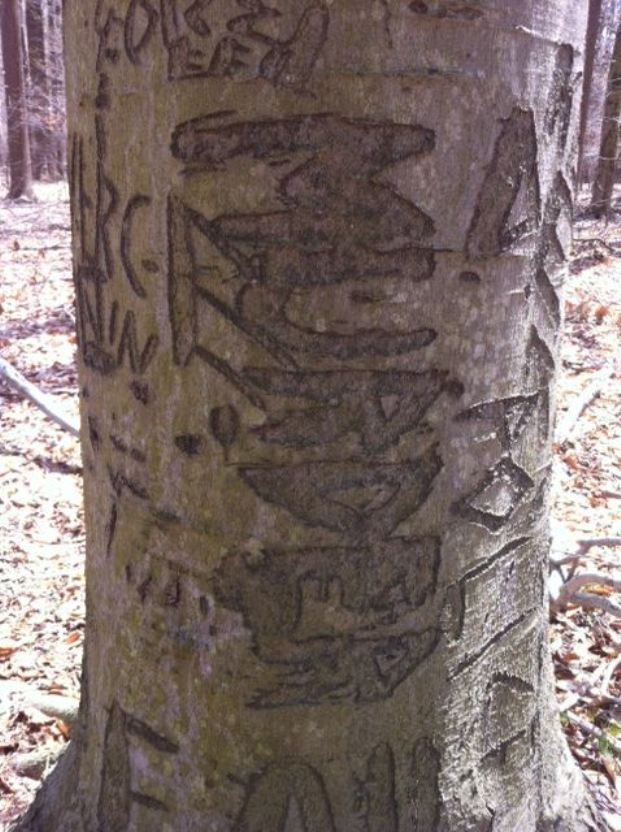 Patients from decades ago walked and carved words and statements on the bark of the trees.

Carvings coming from people with disturbed thoughts would captivate tourists in the area. 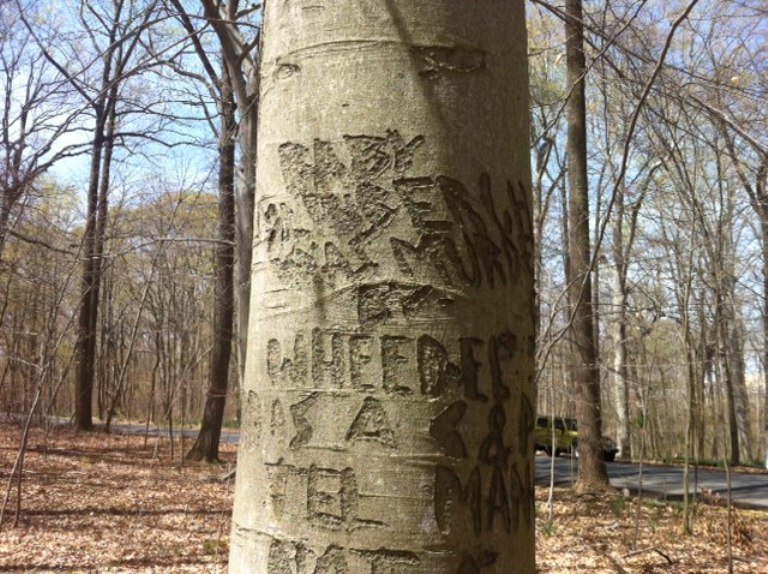 One can find one-word carvings that are disturbing enough, including “Help” and “Murder.” Others carved military-associated words like “Armory” and “Infantry.” There are also religious inscriptions that say “All authority is given unto He in Heaven and Earth” and “The gate of heaven is open.”

Some of the patients turned to the trees to make a confession, carving the statements, “Eddie Kenny did not want to murder George Norris but St. Ignacius made him” and “Monks didn’t want to murder Taylor Holly.”

The words “The Killer,” “Murder” and “Police” have been etched on the barks. 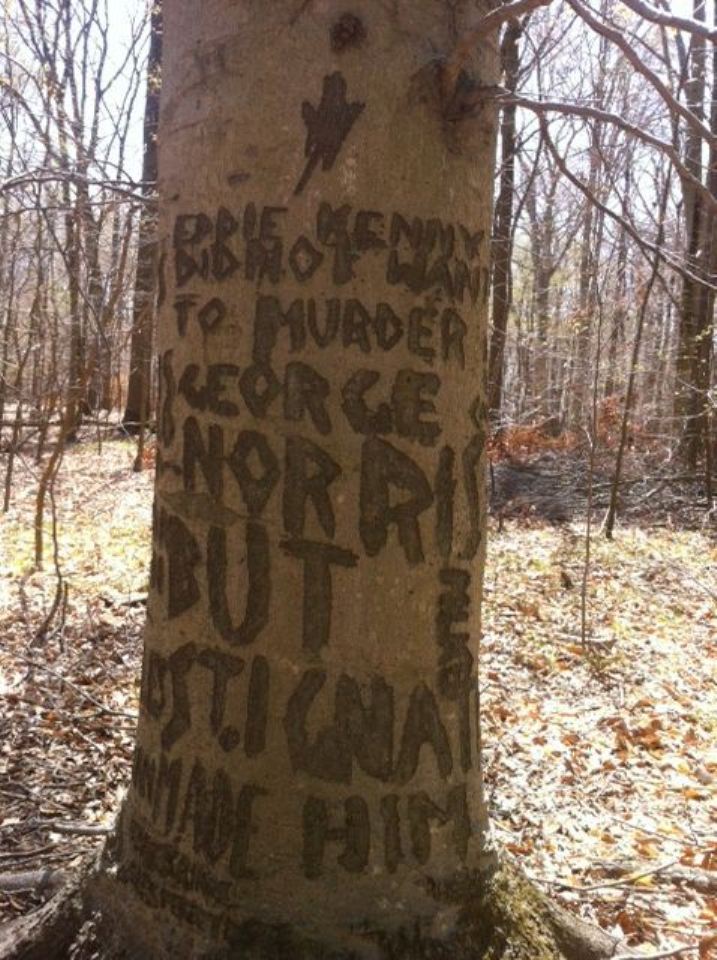 The image of the classic mickey mouse can be seen in one of the trees.

“Christ said to police there was no Second World War”

The Perry Point was originally a general hospital that provided care for patients with various disabilities before it became a psychiatric ward in the 1920s. The Veterans Administration came into being in 1930.