Drake might be reconsidering his decision to support Conor McGregor. The “In My Feelings” rapper has been vocal about backing the Irish mixed martial artist during the recent Ultimate Fighting Championship event. However, the musician’s reaction to McGregor’s opponent Khabib Nurmagomedov jumped the octagon fence was still pure terror.

The UFC 229 match saw Khabib defeat McGregor via submission. However, the Russian fighter immediately climbed out of the octagon to attack McGregor’s cornerman Dillon Danis. Unfortunately for Drake, he was seated rather close to the action. Needless to say, his reaction to the possible danger has turned into a meme.

Who wouldn’t have the same reaction, though? 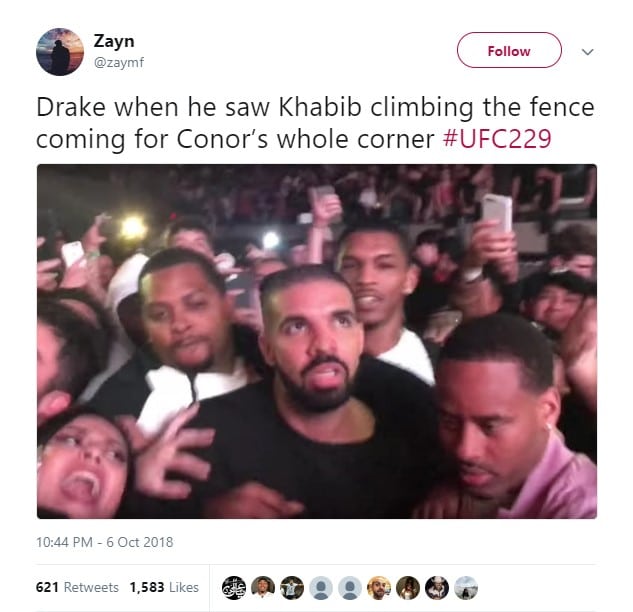 Netizens quickly caught sight of the way Drake reacted to the mayhem. Many believed that the rapper was concerned that Khabib would go after him. After all, Drake had been all over the internet declaring his support for McGregor.

Drake’s terror is understandable. Khabib is a bear compared to the mild-mannered rapper. Literally, Khabib wrestled bears when he was just nine years old so Drake would probably fold like a teddy bear under the fighter’s fist.

Luckily, Khabib wasn’t after Drake. Nevertheless, that didn’t stop the internet from weighing in on the rapper’s reaction.

Can you really blame the guy? 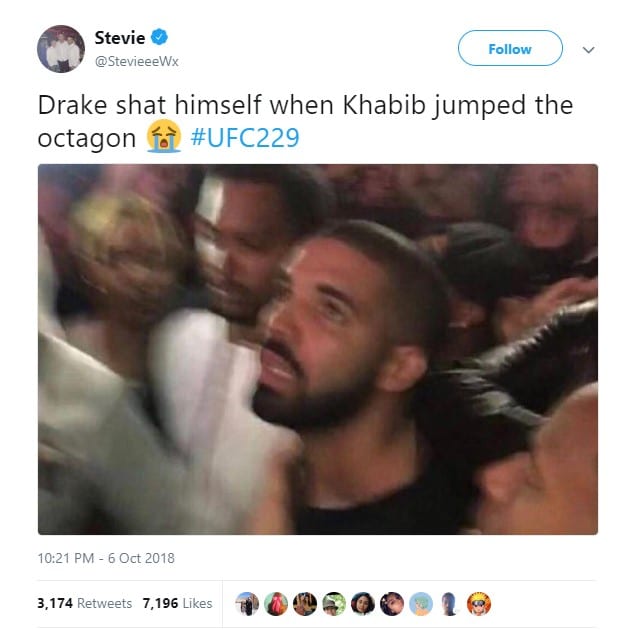 UFC 229 is truly one to remember for all fans. Khabib proved he could easily defeat McGregor with a neck crank in the fourth round. The following brawl only spiced things up since people are already expecting a rematch in the future.

For now, Khabib’s winnings have been withheld by Nevada State Athletic Commission (NSAC) as they investigate his actions. He is still considered the UFC Lightweight Champion.

It is still unclear if Drake will continue to support McGregor or would actually switch sides to placate Khabib. In the meantime, let’s hope that the rapper steers clear of the octagon in case another fighter decides to jump the fence.

Watch the UFC 229 brawl below: