Once upon a time, in the Ice Age when sea levels were much lower, there was a low-lying landmass named Doggerland that lay between England and Norway at the North Sea. Analysis suggests that it was later hit by a tsunami 8,200 years ago during the Norwegian landslide, and was completely wiped out.

“It was abandoned by Mesolithic tribes about 8,000 years ago, which is when the Storegga slide happened,” according to Dr. Jon Hill from Imperial College London.

This theory was submitted to the journal Ocean Modelling and was being presented at the European Geosciences Union General Assembly in Vienna last 2014.

Doggerland was a low-lying landmass that lay between England and Norway at the North Sea.

Dr. Hill and his colleagues from Imperial College, Gareth Collins, Alexandros Avdis, Stephan Kramer and Matthew Piggott illustrated the Norweigan landslide that sent a domino effect that wiped out the island. Dr. Hill goes on to say, “We were the first ever group to model the Storegga tsunami with Doggerland in place. Previous studies have used the modern bathymetry (ocean depth).” 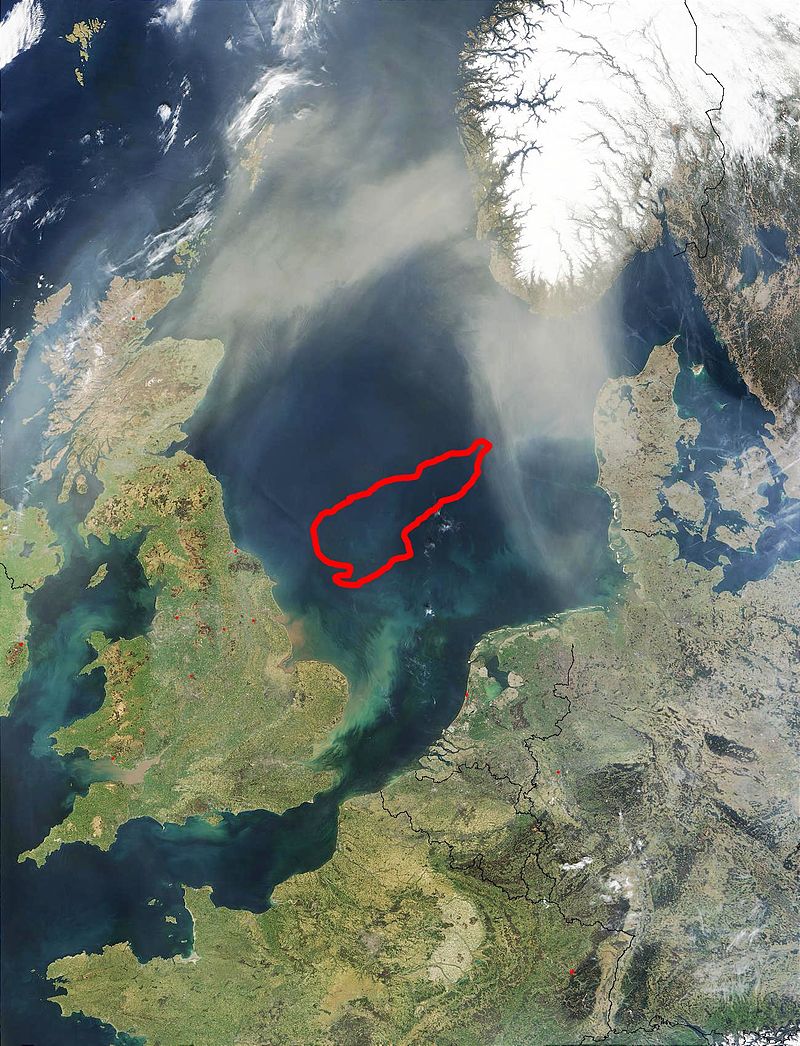 According to, Geological surveys, Doggerland stretched from Britain’s east coast to the Netherlands and the western coasts of Germany and the peninsula of Jutland. It was probably a rich habitat with human habitation in the Mesolithic period, although rising sea levels gradually reduced it to low-lying islands before its final destruction.

More than 20,000 years ago human hunters could walk from what is now northern Germany across to East Anglia. When sea levels began to rise, this landscape became flooded.

10,000 years ago, the area was still one of the richest areas for hunting with a huge freshwater basin in the middle of Doggerland. This basin was fed by the River Thames from the west and by the Rhine from the east. In Mesolithic times, this would have been paradise rife with animals and plant life.

However, 8,000 years ago, Doggerland had become a low-lying marshy island about the size of Wales.

The possibilities of finding archaeological importance in the area had first been proposed in the early 20th century, but interest intensified in 1931 when a commercial trawler operating between the sandbanks and shipping hazards of the Leman Bank and Ower Bank east of the Wash dragged up a barbed antler point that dated to a time when the area was tundra.

Fishing boats on the North Sea had pulled up numerous prehistoric bones of the animals that once roamed this paradise such as mammoth, lion and other land animals. The waters also gave up some ancient human remains, artifacts, small numbers of prehistoric tools and weapons that scientists were able to carbon date to the Mesolithic era. 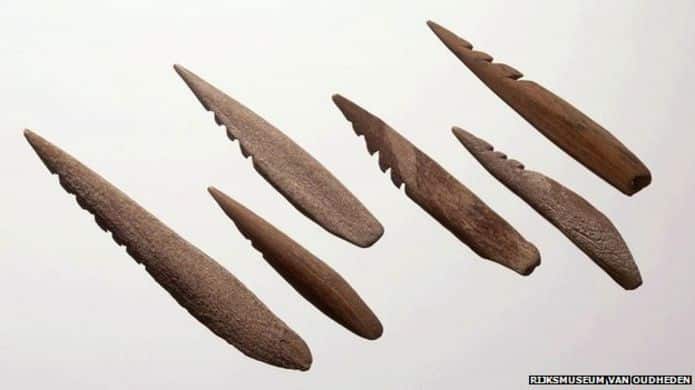 This shaft-hole pick made from an antler… 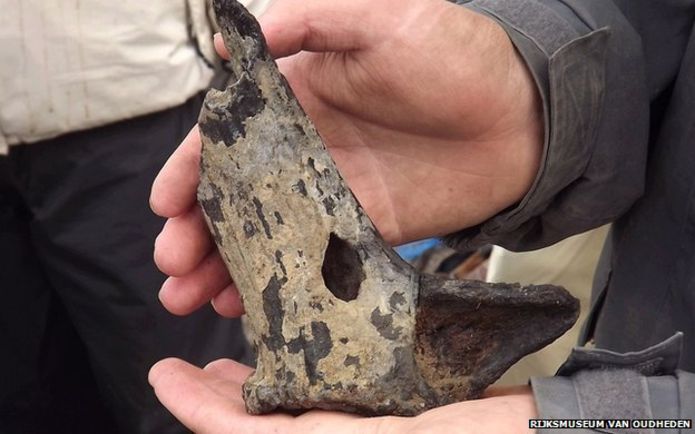 And this Mesolithic flint tool identified as a tranchet ax. 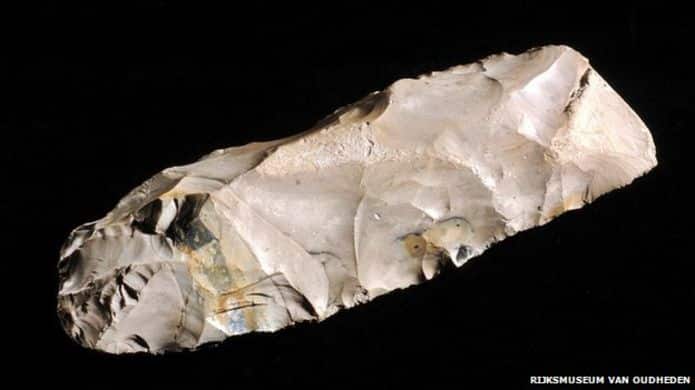 With the Storegga slide collapsing 3,000 cubic cm of sediment (enough to cover Scotland in an 8-meter layer), this would have flooded Doggerland completely.

“It is therefore plausible that the Storegga slide was indeed the cause of the abandonment of Doggerland in the Mesolithic,” says the research team in their Ocean Modelling paper.

As resources had become scarce due to rising sea levels, the competition became more serious.

These are the remains of two young Mesolithic women who were brutally murdered. 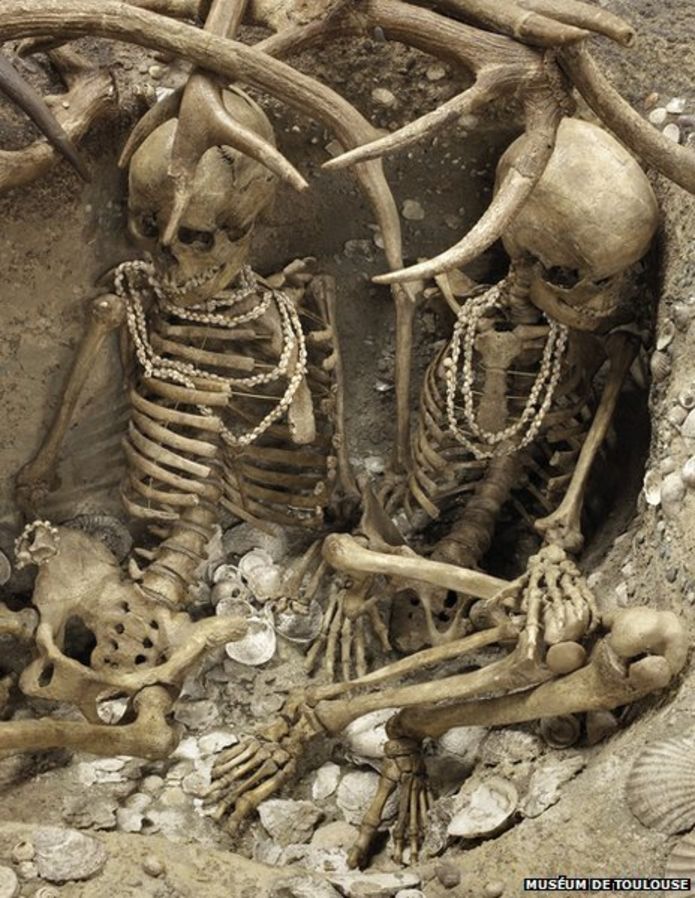 Historians believe that the area once known as Doggerland spanned across 100,000 square miles and could have been home to thousands of people and was most likely once the heartland of Europe. They also believed that Doggerland was submerged sometime between the years of 18,000 and 5,500 BC. A couple of years ago, some divers doing research to find more oil resources discovered the remains of the other world which researchers like to call “Britain’s Atlantis”. After the divers’ discovery, climatologists, archaeologists, and geophysicists mapped the area and found out this Atlantis stretched from Denmark to Scotland.