If you’re a dog lover, the following video might be difficult to take. What happened to Nick the dog was cruel beyond words, but his rescue and recovery is truly inspiring! We share this story to raise awareness regarding animal abuse and to inspire everyone to do something about it.

Animales Sin Hogar (translated as Animals Without Homes) was contacted to rescue a poor homeless dog who was missing all 4 of his paws. A concerned dog lover sent them a note along with a photo of the dog’s heartbreaking condition. Although the concerned individual was feeding the dog, he knew that the poor creature needed more help than he could provide.

The rescue group sent a volunteer to pick the dog they named Nick and quickly brought him to their animal shelter in Montevideo, Uruguay.

Nick’s condition when he was found by rescuers. 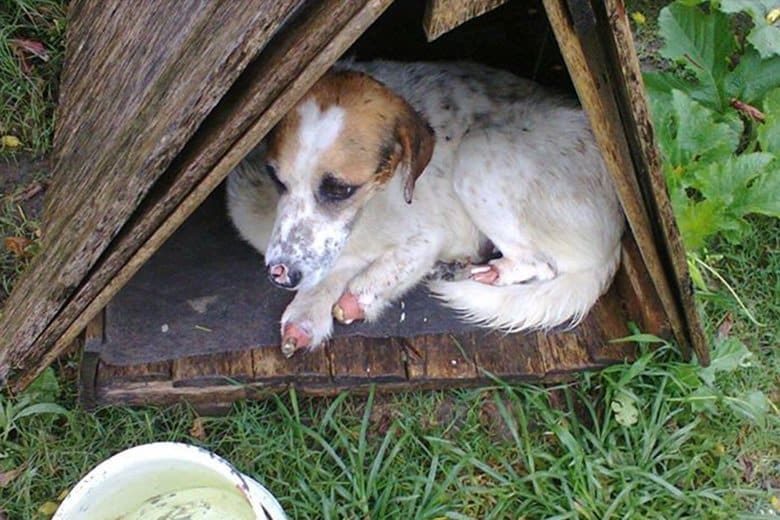 “We were surprised by his condition, but we didn’t want to rush into conclusions about what could have happened,” according to the rescue group. But after taking Nick to a veterinarian. The vet confirmed that the unfortunate dog had lost his four limbs and part of his nose and ear because of a human’s abusive actions.

Animales Sin Hogar never found out what kind of monsters did such unimaginable thing to Nick. However, they are determined to make Nick walk once again. The veterinarians are already doing their best to repair the exposed bone so that it can be fitted with prosthetic someday. You can get updates from Animales Sin Hogar on facebook if you want to know about Nick’s progress.

In spite of the nightmares and pain that Nick went through, he’s naturally friendly, as you can see in the video. Nick is still a happy dog who loves getting cuddles and head rubs! More proof that these animals have hearts of gold that can easily forgive and forget.