Everyone has their own fear especially during childhood. Perhaps no person lived and never felt fear in their lives; even puppies have experienced dread and fear.

A Doberman named Tessa has her own share of this feeling of insecurity.

Doberman are known to be one of the toughest guard dogs but of course there is this process of learning in life called experience that applies even to animals.

In the video, Tessa is still a young Doberman who was playing peacefully when suddenly a tough little dog doll appeared and barked at Tessa. Being the bigger dog, Tessa tried to scare the doll with her barks but this doll managed to scare Tessa instead.

Tessa the Doberman was Scared at this Little Stuffed Toy 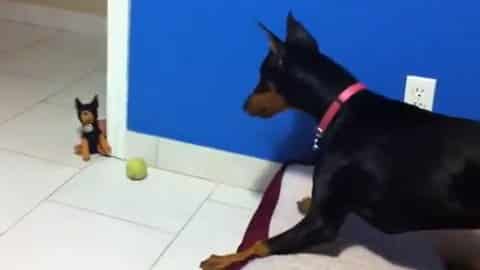 The stuffed toy (controlled by a man of course) was able to get the ball of Tessa but the Doberman was not able to do something about it, she just barked and barked making herself helpless. No one knows what the dog was thinking but based on Tessa’s actions, she’s pretty scared because she couldn’t even come close to the stuffed toy to get the ball. Whenever the doll was placed near Tessa, she withdraws. The video ended with Tessa sniffing the doll and maybe figured out that it’s actually a toy.

Watch Tessa’s Cute and Hilarious Encounter with a Stuffed Toy:

Fear can be real or a product of our imagination. Sometimes we get afraid of something that is really not a threat because we are not able to fully recognize our adversary. There is nothing wrong with getting scared, what is important is how we handle it. The video is funny because who would think that a tiny stuffed toy can scare a fearsome breed of dog. Maybe if Tessa grabbed the toy earlier she would not have gone through that much anxiety.