Let’s face it, there are quite a few highly intelligent criminals who made a mark in history. Of course, what’s amazing is that most of them managed to conceal their identities.

These perps had been able to methodically plan and cleverly execute their heists that afterwards, the authorities couldn’t link an evidence (or find one) to any suspect. Consequently, a number of huge, controversial crimes remain unsolved until now.

When all investigations remain futile and cases turn cold, the crooks know they have successfully pulled off a perfect crime.

Here are 10 of the most extraordinarily “perfect” heists in history. 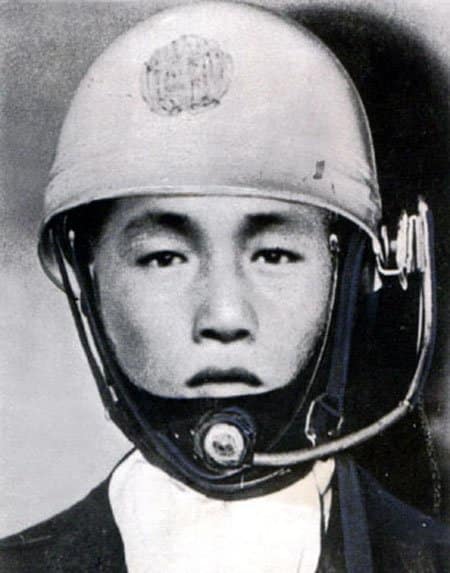 On December 10, 1968, a fake policeman driving a motorcycle pulled over a Nihon Shintaku Ginko Bank car to warn its driver and three passengers of an alleged bomb planted underneath their vehicle.

Since there had been previous bomb threats against the bank, the men stepped out and let the uniformed police officer inspect the company car.

A few moments later, the men saw smoke and flames coming from under the vehicle. It was, of course, staged by the fake police himself.

When the men ran for cover, the phoney patrolman jumped into the vehicle and drove away with at least 300 million Yen or $817,000, which was in its trunk. 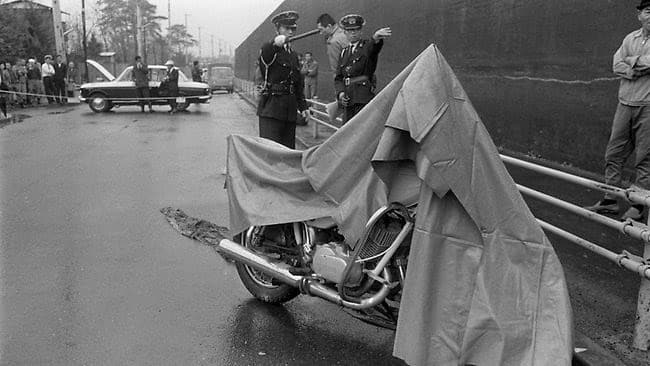 Despite hundreds of pieces of evidence, more than a hundred thousand suspects and police investigations, the suspect was never caught. At that time, it was the single largest heist in the history of Japan. 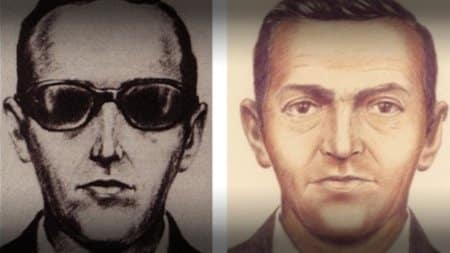 It was the 24th of November, 1971, the night before Thanksgiving. Dan Cooper, a six-foot-tall Caucasian went aboard a Boeing 727 aeroplane in Portland, OR that was bound for Seattle. Cooper looked rather decent in a suit and a raincoat. With a briefcase in his hand, he silently walked towards the back of the plane. He sat, donned a pair of dark sunglasses, calmly lit a cigarette, and ordered whiskey from the stewardess. Then, he handed her a note which read:

“I HAVE A BOMB IN MY BRIEFCASE. I WILL USE IT IF NECESSARY. I WANT YOU TO SIT NEXT TO ME. YOU ARE BEING HIJACKED.”

Cooper demanded $200,000 and four parachutes, which he wanted to be delivered to him in Seattle. In exchange he said he’d release 36 passengers as soon as the aircraft landed.

The swap transpired in the middle of the brightly-lit tarmac, and the passengers were released. However, DB still took the pilot, co-pilot, and a stewardess as hostages. As soon as they were sky-bound, he instructed the pilot to head for Mexico and to maintain an altitude of 10,000 feet. Shortly after the aircraft departed, about 25 miles North West of Portland, Cooper strapped on a parachute, released the plane’s aft stairs, and jumped off the plane.

No one knows for sure whether DB Cooper survived or not. Nine years later, nearly $6,000 of the money was found in bundles on a beach. 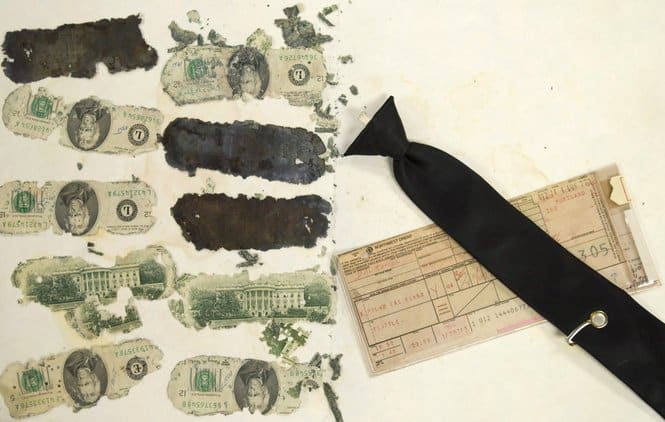 There were no signs of his body. After more than 1000 suspects, numerous death bed confessions, a movie, and over a thousand books, the case remains unsolved. 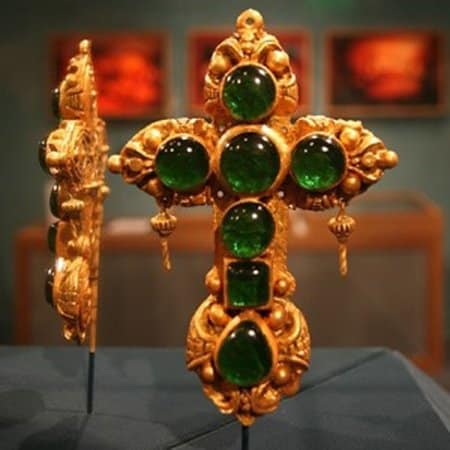 Teddy Tucker found a 22-karat gold cross embedded with sparkling green emeralds in 1955. The Tucker Cross—as it was called—was recovered from the 1594 San Pedro shipwreck.

Teddy sold the priceless piece to the Government of Bermuda, and in 1975, it was brought to the Bermuda Museum of Art to be exhibited for Queen Elizabeth II.

Apparently, an ingenious thief managed to replace the original cross with a replica during this transition. People presumed that the jewels of Tucker Cross were stripped off of it, the gold melted down, and somehow, it had been hauled into the Black Market. 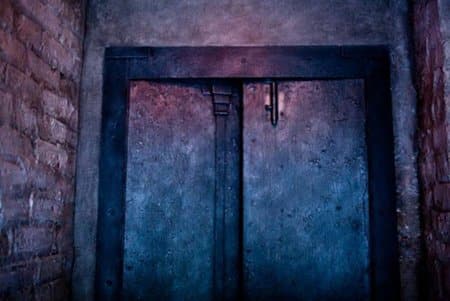 On Friday, the 7th of October, 1977, the chief teller of the Chicago First National Bank counted $4 million dollars and placed it in a locked money cart. The money cart was then stored in a heavily guarded vault located two floors below.

When the money was counted again on Tuesday morning, exactly $1 million dollars—in $50 and $100 denominations— seem to have “vanished” from the vault.

Authorities found $2,300 of that money in a drug raid in 1981. The rest of it and the hoodlums who stole the cash, however, were never found. 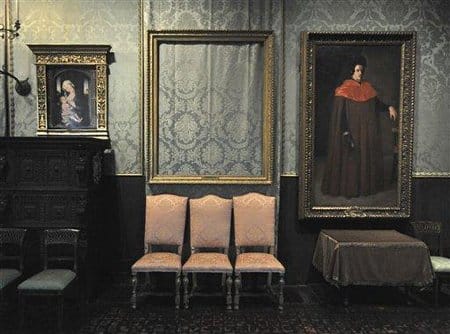 Two thieves stole 13 priceless paintings including masterpieces by Rembrandt, Vermeer, and Degas. On March 18, 1990, the crooks, who disguised themselves as Boston police officers, claimed they were responding to a call of a disturbance at the Isabella Stewart Gardner Museum.

Breaking protocol, the security officer on duty, unfortunately, let the imposters in. Once inside, one of the suspects told the officer that they recognize him, and that have a warrant for his arrest. All the while, the perps’ intention was to lead the guard away from the only alarm button that was behind the security desk. The criminals ordered the poor guard to summon the other officer on duty, which he did. Once they got both men rounded up, they handcuffed them and led them to the basement. There, the crooks tied the guards’ hands, feet, and heads with duct tape and secured them to the pipes. The officers were 40 yards apart from each other.

It wasn’t until the morning, when the guard’s relievers came, that they learned the museum had been robbed.

The burglars were able to take a third of a billion dollars’ worth of artworks including Rembrandt’s Storm on the Sea of Galilee (1633). 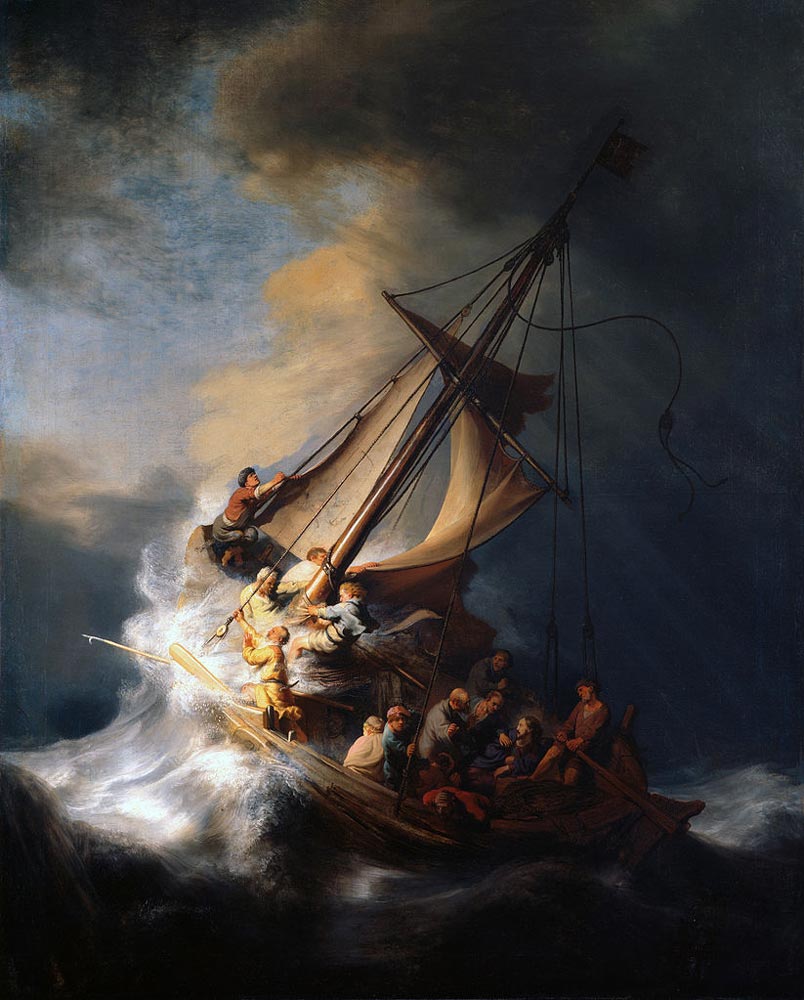 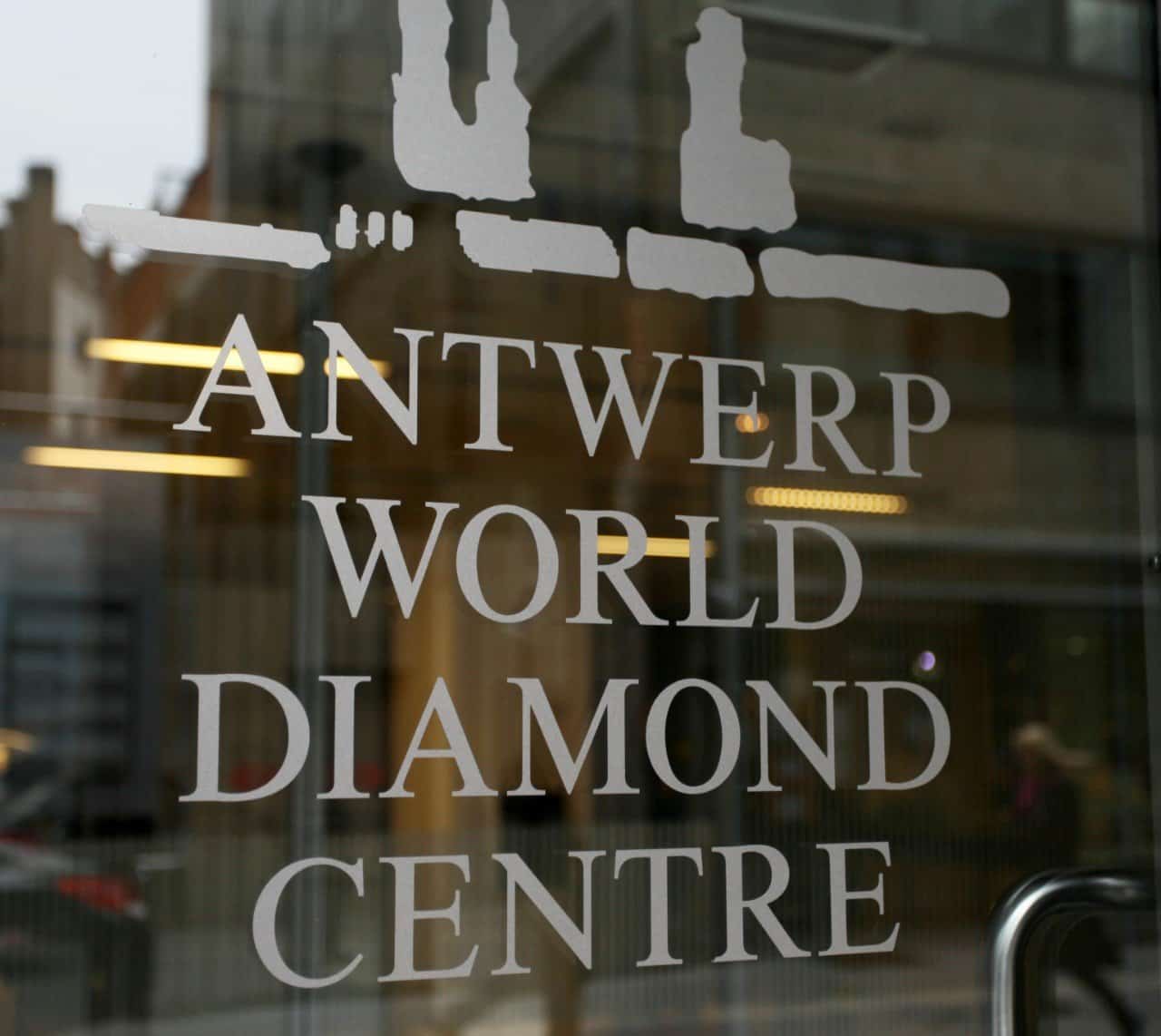 The Antwerp Diamond Centre in Belgium was supposed to be the world’s most impenetrable vault. After all, who could possibly go through 10 layers of security including a lock with 100 million possible combinations? And who could go undetected in an area packed with heat/motion sensors, radar, magnetic fields as well as a private security force? 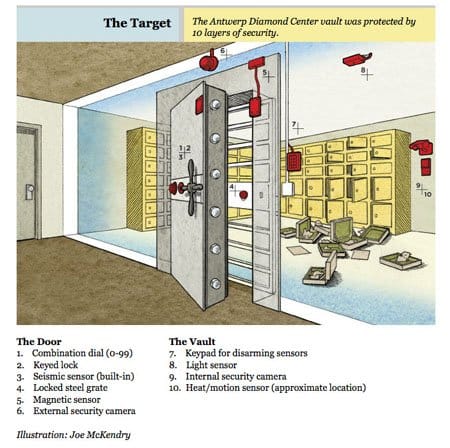 Well, somebody did, and it turned out to be “the heist of the century.”

On February 15, the burglars successfully entered the vault, opened the safe deposit boxes, and quietly left the place with the sparkling loot. 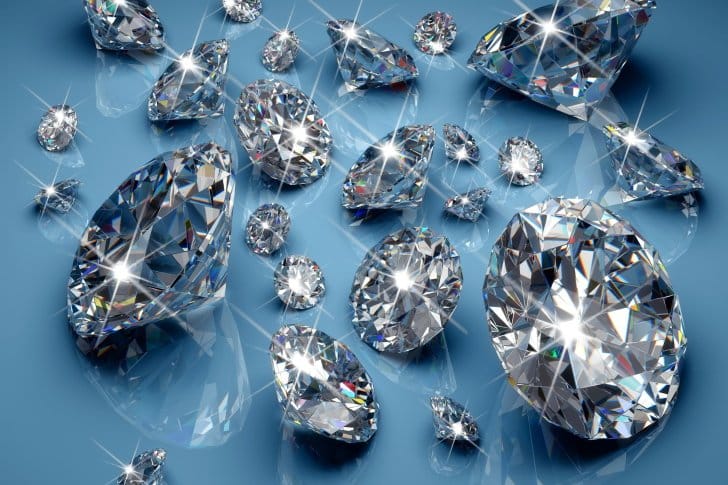 Authorities believed Italian thieves were behind the heist. And in February 2003, Leonardo Notarbartolo, the alleged ringleader of a crime group, was caught based on circumstantial evidence and was sentenced to 10 years in prison. However, he was released on parole.

In an interview with Wired Magazine, Notarbartolo said that “the true take was only $20 million and was part of a larger conspiracy involving insurance fraud.”

The loot was never found.

On July 11th, 2007, Dar Es Salaam, a private financial institution, was burglarized by two to three thieves who left with a third of a billion US dollars in their hands. The suspects were allegedly guards from the bank itself.

Strangely, the bank officials did not want to draw attention to themselves and have people asking around why they had such a huge amount of cash. There has been minimal press, but they just decided to keep quiet. 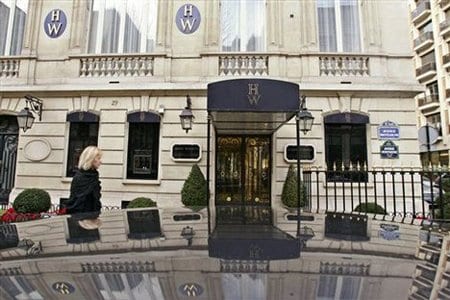 Approximately $108 million dollars’ worth of diamonds, rubies, and emeralds was stolen by four men from this renowned Paris jewelry store on December 4, 2008. Disguised as women with long blonde hair and winter scarves, the perps stood in front of the shop’s intercom and demurely asked to enter the shop. Once inside, they flaunted a .357, a hand grenade, and began looting the store.

The Pink Panthers, a notorious Serbian criminal gang, was believed to be behind the robbery. This group is tied to $132 million robberies worldwide but have never ever been caught.

Like a scene from a thrilling movie, three masked men brazenly broke into the second-largest department store in Europe. On February 25, 2009, using a rope ladder, the crooks got inside Kaufhaus Des Westens (KaDeWe) in Berlin without activating any of the shop’s security sensors or alarms. The thieves took off with approximately €5 million worth of jewelry and watches that day.

It was almost a perfect crime if it weren’t for a piece of crucial evidence one of the burglars left behind: a single glove. But just when everyone thought they’d be able to apprehend the suspect because of the DNA sample from the glove, things took a very bizarre turn.

The DNA matched two people, 27-year-old Hassan and Abbas O. —identical twins. Under German law, each person should be separately charged with the felony, but since neither of them could be tied to the evidence, the police had no choice but to set them both free. 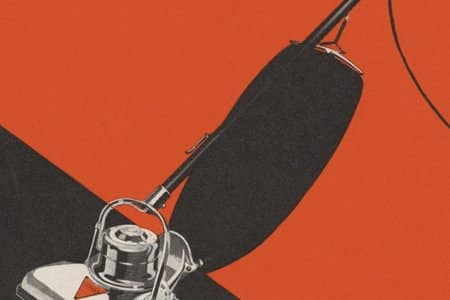 A French supermarket chain called Monoprix secures their money inside thick steel safes. However, the pneumatic tubes connected to the safes are not… shall we say…impenetrable? The gang à l’aspirateur, which translates to vacuum gang in English, somehow figured that out.

Using a drill and a modified vacuum cleaner, they have used that method to empty the stores safes. The gang was able to successfully siphon 800,000 EU in 15 night-time robberies as of 2011.

So far, the only traces of evidence the authorities have are the CCTV tapes of the masked thieves.