Diamonds and dessert are the only two surefire ways to win a woman’s heart. And if you’ve got the cash to spend for it, why not go all out?

Here are the world’s most expensive desserts to choose from if you’re planning to give yourself or your lady-love one extravagant sweet treat. 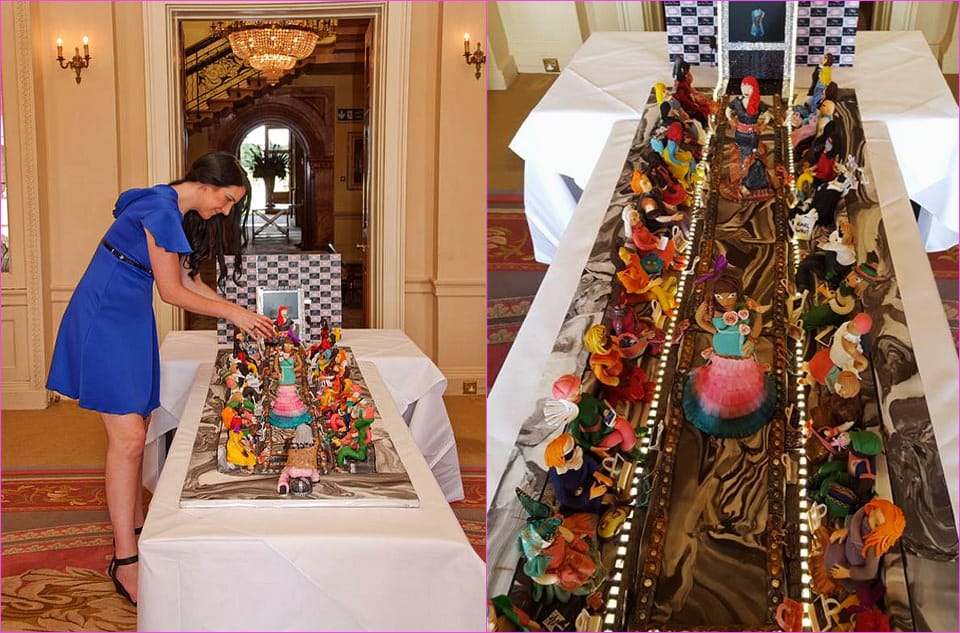 British designer Debbie Wingham took 1,100 hours to make this cake, which was bought by an unnamed buyer from the United Arab Emirates for his daughter’s birthday and engagement party.

The cake, which depicts a runway fashion show, spans 6 feet and weighs 1,000 pounds. The runway is done in Belgium chocolate with chocolate ganache and chocolate truffle cream, featuring hand-sculpted figurines showcasing Wingham’s couture. The front row seats are made in Madagascan vanilla bean with mascarpone cream and strawberry conserve.

Much of the price, however, can be attributed to the bling. The runway alone features 400 1-carat diamonds and 73 white 1-carat diamonds. Places of prominence are reserved for the five 2-carat pink diamonds, six 4-carat yellow diamonds, and 15 5-carat white diamonds. 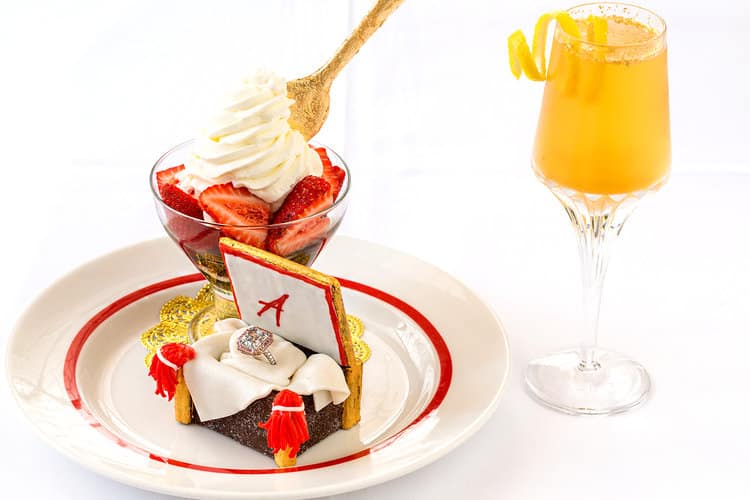 If you have $10 million to spare, would you buy a six-bedroom vacation home in Thailand or gobble down a deluxe strawberry dessert in New Orleans?

Arnaud’s Restaurant gives you the ability to choose the second option. Normally, its signature dessert costs $9 apiece, but for Valentine’s Day 2016, the French Creole restaurant decided to give it an upgrade. 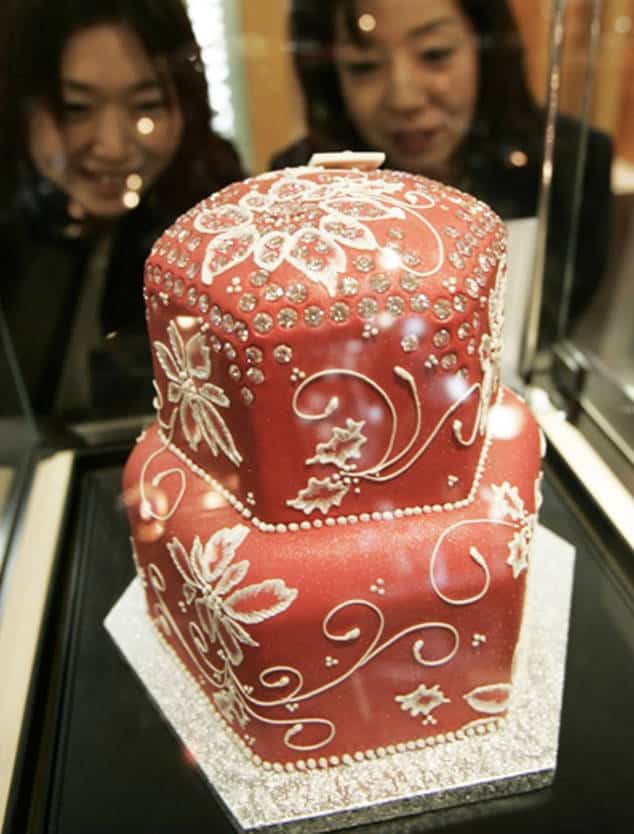 This two-layer fruitcake was commissioned by the Takashimaya Department Store, a Japanese store operating in Tokyo, to attract more customers to its doors. No one has taken a bite of it to date probably because of the 223 individual diamonds worth 170 carats embedded into the cake’s surface. 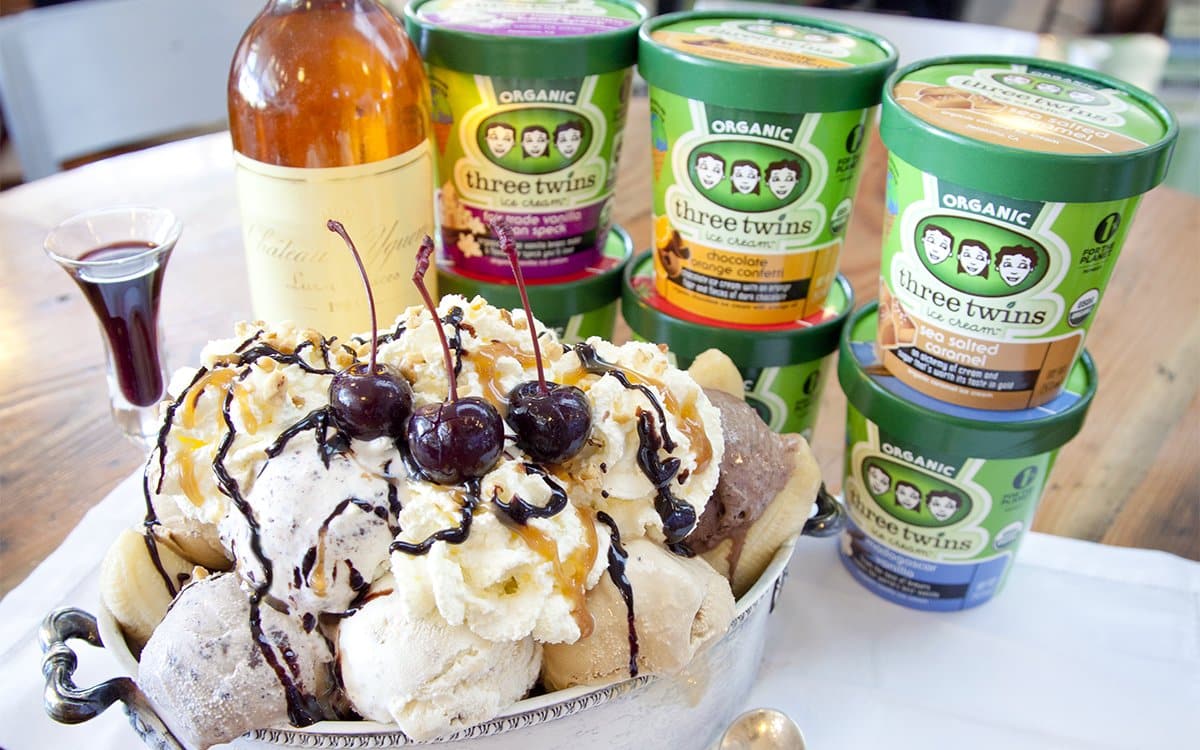 Three Twins Ice Cream in Napa credits itself for serving the World’s Most Expensive Ice Cream Sundae. For $3,333.33 a bowl, they can serve you a banana split doused in syrups made from three rare dessert wines, which you can eat with a special ice cream spoon from the 1850s. If you give them a day’s notice, you can even have a cellist come serenade you while you eat.

And if it’s still not that expensive to you, you can upgrade to the World’s More Expensive Most Expensive Ice Cream Sundae. No one has done so yet, but if you do, you’ll get flown to Mount Kilimanjaro (airfare to Tanzania included), where the Three Twins owner himself will hand-churn ice cream made from glacial ice harvested from the mount’s summit.

The cost also includes five-star accommodations, all-you-can-eat ice cream, and an organic t-shirt to remind you of your expensive whims. For $25,000, you can also bring a friend so you won’t have to be so lonely. And if all this sounds over-the-top even for you, don’t fret. A third of the proceeds are donated to an environmental non-profit in Africa. 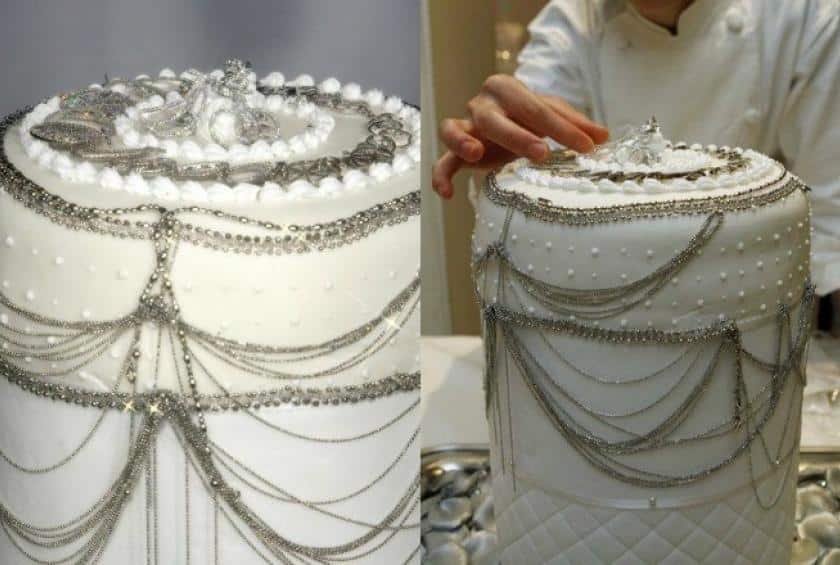 Gold and diamonds not your thing? Perhaps you’ll take a fancy for the Platinum Cake, if you have $130,000 to burn. Japanese pastry chef Nobue Ikara created the wedding cake to entice women to buy more platinum.

The cake is a simple white cake draped in platinum necklaces, pendants, chains, and pins. The chef dedicates the Platinum Cake to Japanese women celebrities, including Rincho Kikuchi of “Babel” and model Chie Kumasawa. 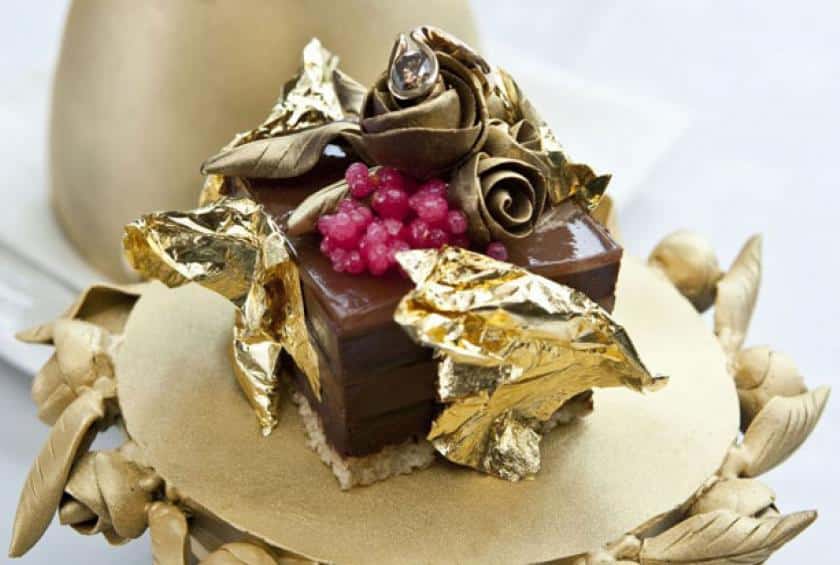 Most people go to the deli for some pudding. The filthy rich, however, can fly down to England for a taste of the most expensive pudding in the world. Chef Marc Guibert’s creation is an edible replica of a Faberge Egg.

It’s made from four different flavors of Belgian chocolates, mixed with gold and champagne caviar, and covered with edible gold leaf. It also comes with a bottle of Chateau d’Yquiem, which costs $700 per bottle on its own. You can’t just fly down to England on a moment’s notice, though. The chef requires three weeks to source all the ingredients and put them together into one mind-bogglingly expensive dish. 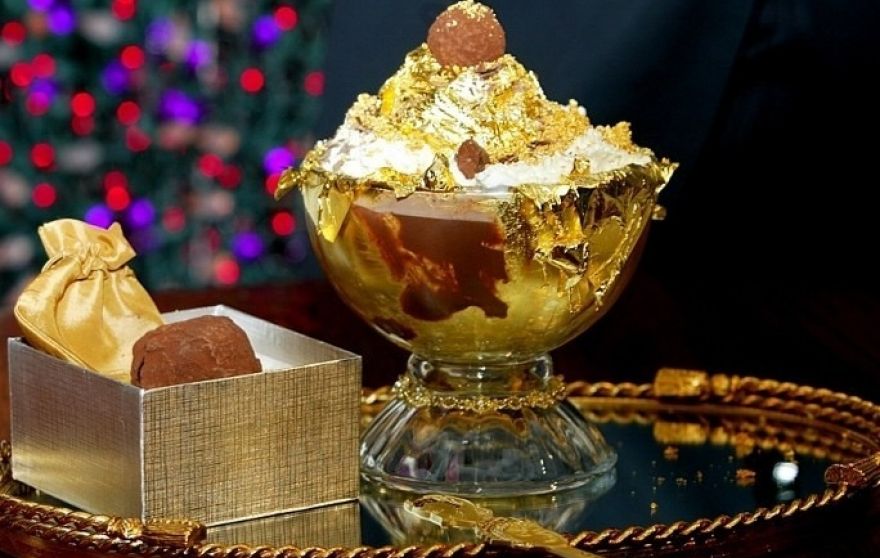 For the price of a Toyota Corolla, you can relish in the cool, mouth-watering sweetness of Serendipity 3’s chocolate sundae. The ingredients are flown in from all around the world—the cocoa comes from various places, the edible gold from Switzerland, and the $250 La Madeleine Au Truffle from France.

It’s served in a goblet with a gold crown, a gold spoon you can take home, and an 18-carat gold bracelet with a 1-carat diamond. 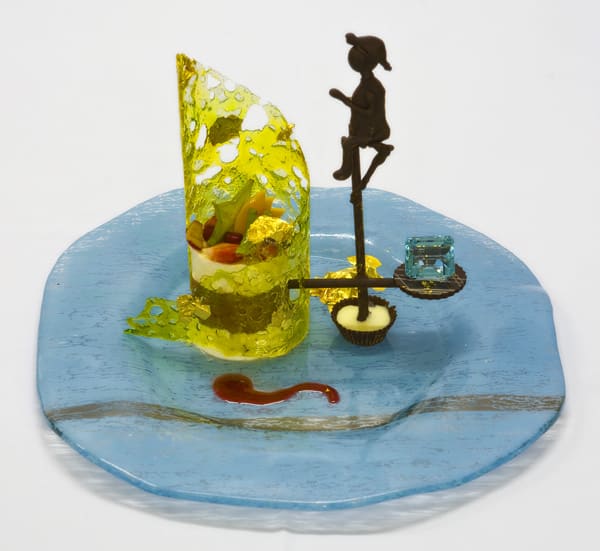 The Wine3 Fisherman Stilt pays tribute to the time-honored tradition of stilt fishing in Sri Lanka with its version of the cassata, a traditional Sicilian sweet. Its base is concocted from Irish cream, champagne sabayon made from Dom Pérignon, pomegranate and mango compote, and seasonal fruits.

The base is adorned with a hand-carved chocolate sculpture in the shape of a fisherman on a stilt. Underneath the stilt, you’ll find a stunning 80-carat aquamarine sitting there all yours for the taking.

The world’s most expensive donut was made by none other than Krispy Kreme. To celebrate National Donut Week 2017, the donut giant created a gold-gilded donut filled with champagne jelly made from Dom Pérignon vintage 2002, Chateau d’Yquiem crème, and raspberry.

The outside is drizzled with passionfruit and covered in 24-carat edible gold. Topping the masterpiece is a hand-made Belgian white chocolate flower dipped in 23-carat gold dust and flanked by edible diamonds. Best eaten with a 500-year-old Courvoisier de L’Esprit Cognac, which comes with the lofty price tag. 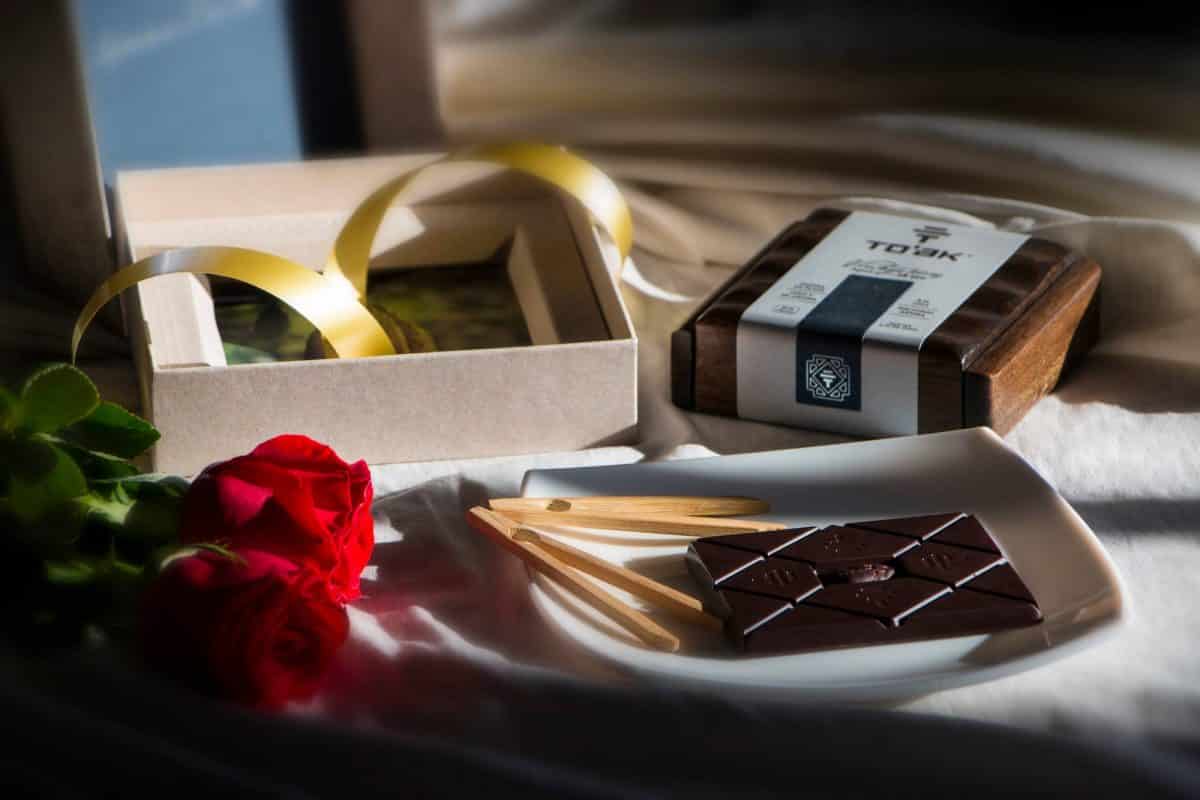 In the heart of the Ecuadorian rainforest is a clump of 100-year-old Arriba cacao trees believed to be the last of the species. This is where To’ak Chocolate harvests the world’s rarest and most expensive beans to create its chocolate bars.

No, they don’t come wrapped in gold or dusted with diamonds. But they do go through a two-year process through which the cacao beans are made by hand into bars. The result is the world’s most expensive chocolate at $260 grams for each 50-gram bar. It’s 81% dark chocolate and has nothing but cacao and sugar in it.