Women have to contend with several inconveniences on a daily basis and sometimes that includes tolerating catcalls from disrespectful strangers who just don’t get how basic manners work. Really, which part of catcalling do men think women find nice and flattering?

Such distasteful catcalling was experienced by a female bicycle rider on a busy street in London. She was riding her bike but came to a halt on the bicycle lane beside a van when the traffic light turned red. Then, the driver of the van suddenly taunted the woman. She brushed him off to show that she is not interested in talking but the guy ignored her blatant refusal.

What he did next was something worthy of at least a hundred slaps on both sides of the face. He tried to forcefully grab her then obnoxiously asked for her number. Fortunately, the light turned green so the guy had to drive off and leave the woman alone.

However, the formidable female cyclist isn’t letting the rude guy go. She followed the van and when it stopped, she did the unthinkable.

The video was captured by a camera attached to the helmet of a motorcycle rider. After the video was uploaded, people were quick to take the female cyclist’s side. Some said that what the van driver did was so wrong on many levels and that he just reaped what he sowed. Some even praised the “badass” woman for having the guts to stand up for herself and to take revenge.

However, there are some who thought that she went too far. Some men commented that it was wrong to damage the van after some mere catcalling. Others also said that what she did was considered a crime and is not the proper response to the van driver’s wrongdoing.

It was reported that this clip was allegedly staged. In an interview, a man named Scott Deane, who happened to witness the people in the video planning for the take, said that he thinks the incident was staged.

“I was across the road having a break and I saw this very attractive girl with a bike talking to a blonde guy who was giving her instructions.

“Then three guys dressed in orange site clothes turned up in a van and the blonde bloke was giving them instructions, too.

“He was telling the girl: ‘You need to ride behind the van aggressively.’

Some people were also skeptical of the whole turn of events, noting that the way the woman easily tore off the van’s wing mirror was somehow far from reality. They also noted that it was quite convenient for the motorcycle rider to capture all the events on video, though at this age where helmets have cameras, that really is not an impossible feat.

The lady easily ripped off the van’s wing mirror. 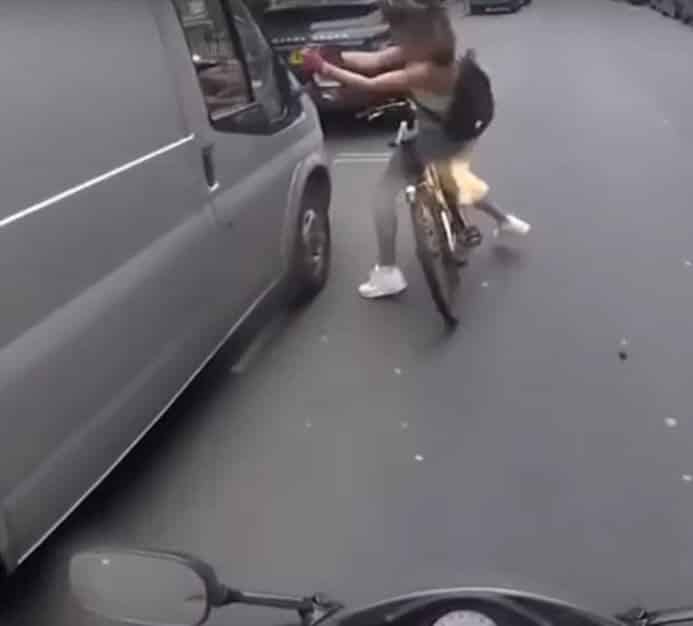 The said video was uploaded by Viral Thread, a company known to sell viral videos to news organizations for a certain price and is run by Jungle Creations. However, Jungle Creations had denied any involvement in creating the video and asserted that while its authenticity cannot be verified, they believe that it is not fake.

This viral video of a woman being catcalled and harassed is allegedly fake. 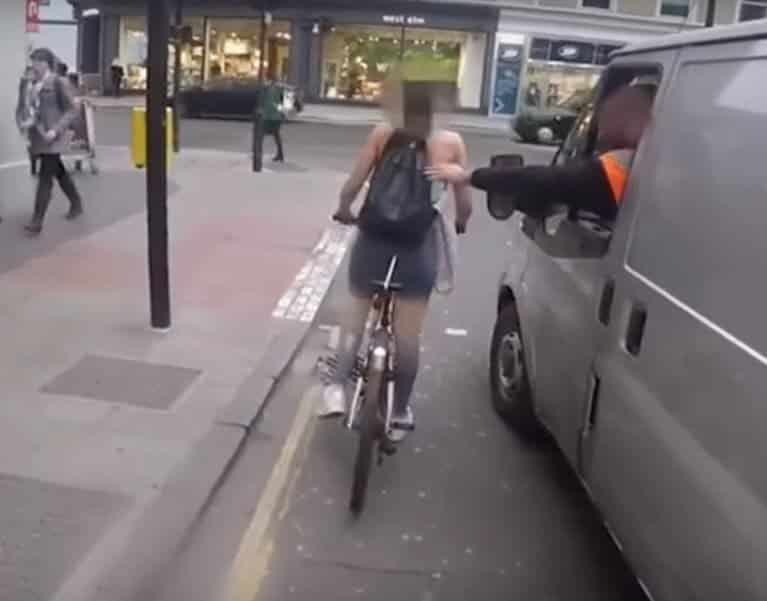 Anyway, theoretically, if this certain instance occurred in reality (no actors, no script), what would you think? Was the van driver’s catcalling not wrong and could it be considered harmless? Was the female cyclist’s revenge too much? Who deserved which?

Well, we think that the woman, and all women for that matter, do not deserve to be catcalled and sexually harassed. And, while there might have been a more proper way of settling the score, we think the guy deserved the hassle (and the shelling out of money!) of having the van’s wing mirror repaired.

But, hey, that’s just us. We’re sure you have an opinion about this issue, too. Why don’t you share your thoughts with us in the comments section below? We’d love to hear from you.