Sepak Takraw is a sport native to Southeast Asia, more specifically from the Malay-Thai peninsula and its well known in countries like Thailand, Cambodia, Malaysia, Laos, and Indonesia. “Sepak” means kick in Malay and “takraw” means woven ball in Thai. If you put the words together, it means to kick ball, which is what the game is all about.

This game has more than one name. In Malaysia, its called Sepak Takraw Raga while in Thailand it is known just as Takraw. But in Myanmar, it is known as the lonely chin and in the Philippines, it is known as Takraw and Sipa, which literally means to kick.

Before becoming the sport it is today, it used to be just passing a ball to each other in a circle. Now, the rules of the sport only let players use their head, knees, feet, and chest. It will take a lot of skill to play this game since you can’t use your hands or arms at all.

With that said, a clip of six guys playing sepak takraw in a village outside Yangon has gone viral on Instagram. The clip was posted by Canadian mixed martial artist Dave Leduc, and it quickly went viral after it was picked up by American comedian and radio host Joe Rogan. 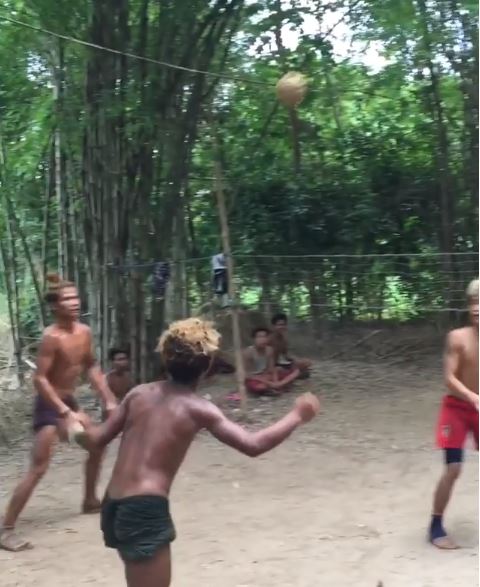 Justin “The Big Pygmy” Wren spotted the video and shared it to his own social media account, writing, “O crazy! These guys need to be in the #worldcup or #mma #UFC #bellator CHAMPS!” He then credited Leduc as the source of the video.

A few hours later, MMA commentator and former Fear Factor host Joe Rogan posted the video, and it has since been viewed over two million times. He wrote: “Holy sh*t! These guys have insane skills!”