This dad would do everything to watch over his sick child even if it means he has to sleep on the floor.

Andre Palmer was pictured by her wife, Amy, sleeping under their kid’s hospital bed at York Hospital Pediatrics in Pennsylvania.

Their son, Andre Jesse (AJ), was admitted due to “an asthma attack” that her mother described as something that she couldn’t “break.”

After attending his third job, Palmer straightly went to attend his child’s needs in the hospital. Obviously, he was dead tired and sleepless.

When Amy saw her husband lying underneath AJ’s bed – on the cold floor, with only a pillow on his head – she snapped a photo and proudly shared it on Facebook.

Palmer sleeping under his child's bed 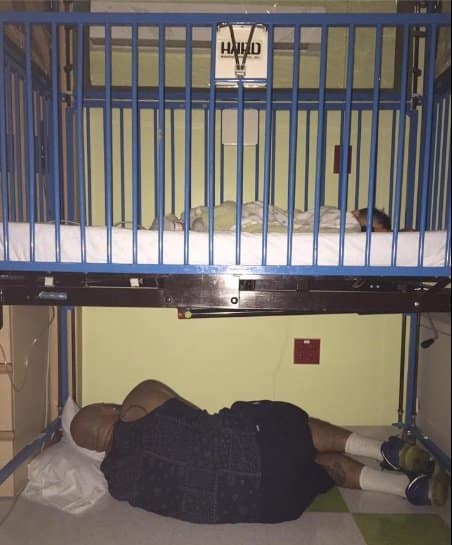 This is a picture of a hard working man dedicated to his family!! After working all night third shift, he’s right here with his son who is in the hospital. He’s so tired but he’s here!! Father of the year award goes to Andre Palmer!!! I love you more than words baby.

Amy explained that Palmer was really worn out, but can’t stand not to be with AJ, especially he’s now sick.

I thought to myself after working all night he didn’t have to come to the hospital. He could have went home to sleep.

She went on to illustrate that she was already asleep when Palmer entered their room. He didn’t wake her up and just grabbed a pillow and sleep under the crib.

Amy didn’t expect the reaction she got when she shared Palmer’s photo on Facebook. The response she received is overwhelming and she values every good word she reads.

Amy’s message for everyone 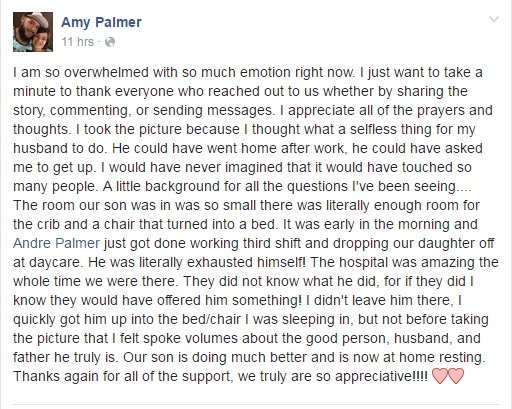 Amy is just too proud of her husband and said that every child needs a father like him.

However, to make everyone stop worrying for Palmer, she said that after she took the snap, she woke him up and asked him to sleep on the bed in the room.

They are all home now as AJ is now good and they can sleep comfortably in their beds.