The news just keeps getting crazier by the minute. This is a shocking story that took place in Stockholm, Sweden earlier this month, when a thief punches a mother after she tries to stop him from robbing an elderly woman. This happened earlier in the month at a tube station and was caught by security cameras. The attack has caused quite an outrage in Sweden and the head of the investigation has sworn to catch the thief.

In the video, it clearly shows an elderly woman walking out of Gamla Stan tube station in Central Stockholm, getting her phone out of her bag. While she was answering the call, the thief walks up behind her and tries to steal the wallet out of bag. This is the moment when a mother steps in and foils the attempted theft.

The mother who was walking in the opposite direction with her two children, sees what was going on and screams for the old lady to watch out from being robbed. According to the lead police investigator Stefan Tellqvist, ‘the mother who sees this screams to the old lady to watch out, and pushes the man’s hand out,’ he said in a statement to SVT, a Swedish news website.

Thief punches mother in the face after she foils his attempt to steal. 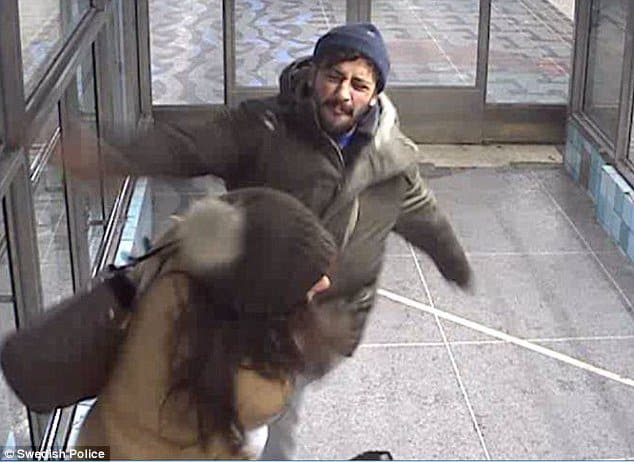 According Mr. Tellqvist, ‘It is the worst thing I have ever seen during my years as a police officer. I will get him if it’s the last thing I do.” The police investigator added that he is due to retire this year and has made it his personal mission to put the thief behind bars.