Game of Thrones fans may have overreacted when Sophie Turner got a new tattoo in honor of the HBO series. The actress has just spoken up about the controversial skin art and interestingly, she explained that the new ink is not a major Season 8 spoiler about Sansa Stark’s fate.

Turner already has a tattoo that commemorates the day she and co-star Maisie Williams were cast in Game of Thrones. However, people reacted differently when Turner’s artist Lauren Winzer shared a photo of the actress’ new ink. The tattoo features the Starks’ direwolf sigil with the line, “The pack survives.”

The new ‘Game of Thrones’ tattoo pays tribute to Ned Stark’s quote that proves the power of House Stark. 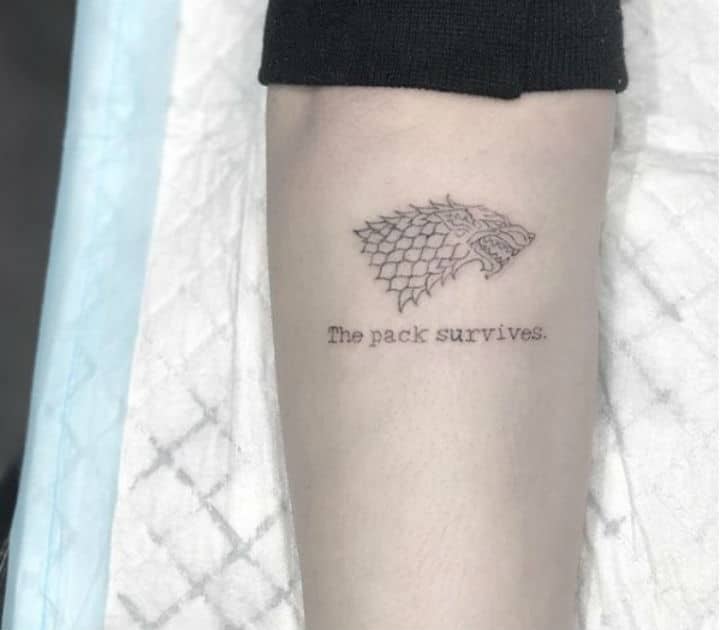 Some fans immediately scolded Turner and Winzer for posting spoilers from the final season on social media. However, the Game of Thrones star fired back that the tattoo does not give away the show’s conclusion.

Turner was a recent guest in The Late Late Show with James Corden where she opened up about it. The actress admitted that she was warned about getting the tattoo but she went through with her decision.

“Actually, when I was getting it done, people advised me not to because it looked like I was giving everything away but I wasn’t,” Turner said. “It’s just a quote from last season but everyone figures that the pack really does survive, but it’s just a moral I like to live by.”

In the final episode of Game of Thrones Season 7, Sansa and Arya Stark had a touching exchange after the assassination of Petyr Baelish. It was Sansa who said the line, “When the snow falls and the white winds blow, the lone wolf dies but the pack survives.”