It holds true that the Earth’s surface is 70 percent water, but people do not have any idea how truly deep and mysterious it is. In a recent report from National Ocean Service, around 95 percent of the world’s ocean remains unexplored. Humanity simply has no clue what lies beneath the surface.

Apparently, Randall Munroe of xkcd decided to create a comic titled “Lakes and Ocean.” He drew inspiration from the aforementioned mystery in hopes to give people a better understanding. It is combined with both facts and humorous details, as he wants to show how shallow our knowledge of the waters is.

This illustration by Randall Munroe only proves how shallow our knowledge about waters is. 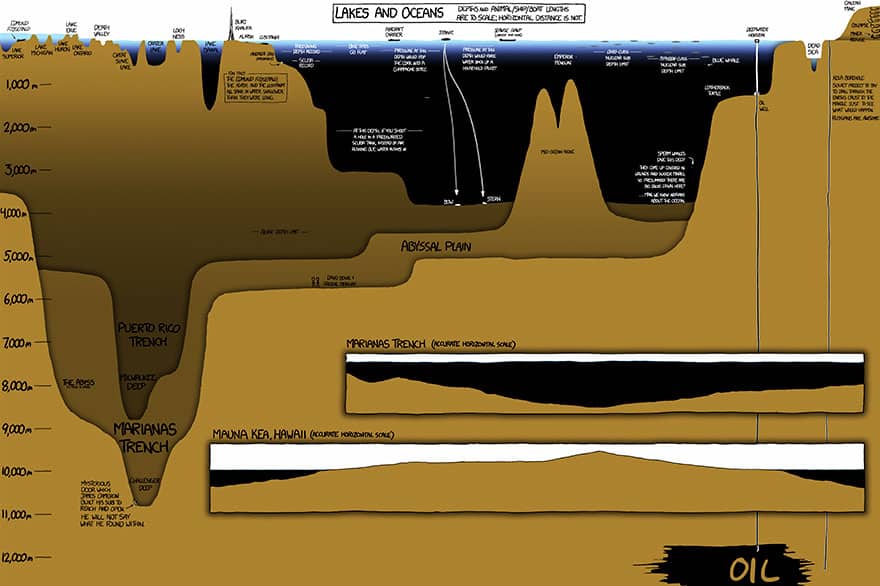 The illustration features the Great Lakes freighter SS Edmund Fitzgerald, which sank in 1975 in water shallower than its length. The ship was over 200m long while it was recovered at the depth of 160m. The illustration also shows elements of the popular RMS Titanic, Burj Khalifa, and even stick figures of the late David Bowie and Freddy Mercury. It is a witty reference to their song titled, “Under Pressure.”

At the bottom of the illustration, more or less 10,916m is the Challenger Deep. The latter is the deepest known point on the planet, which is located in the titular Mariana Trench, Pacific Ocean. It is worth noting that James Cameron made a descent to the bottom of it a few years ago and filmed his entire experience.

The door in the picture is fictional, as it only implies that Cameron went so deep to reach it. And since he reportedly saw tiny amphipods and no fish, humanity can only imagine what really swims at the rest of the unexplored 95 percent of the ocean.

Scroll down below and check out Munroe’s illustration. 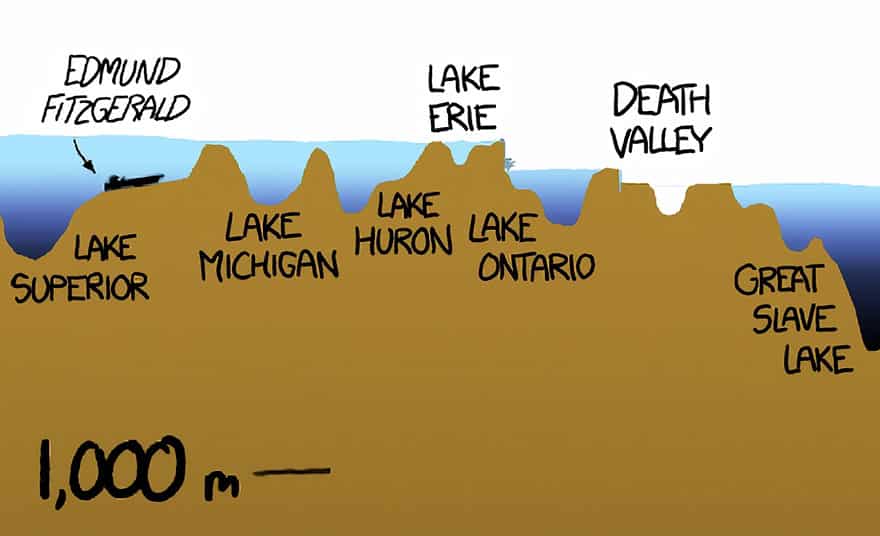 And as you can see here, the vessels seem lost in the depth of the sea are just at the top of the picture. 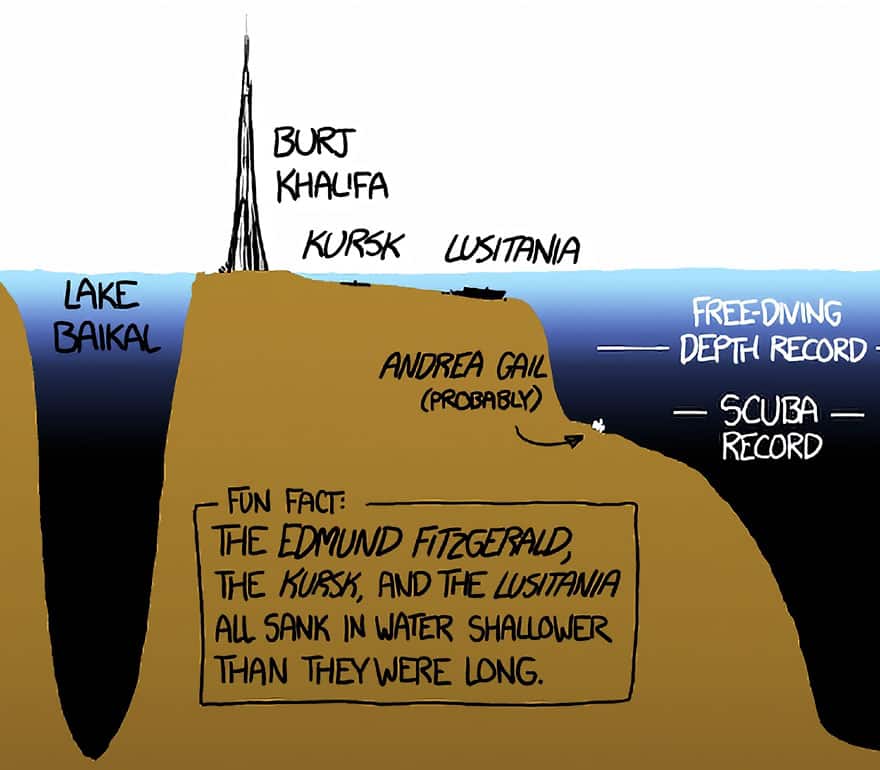 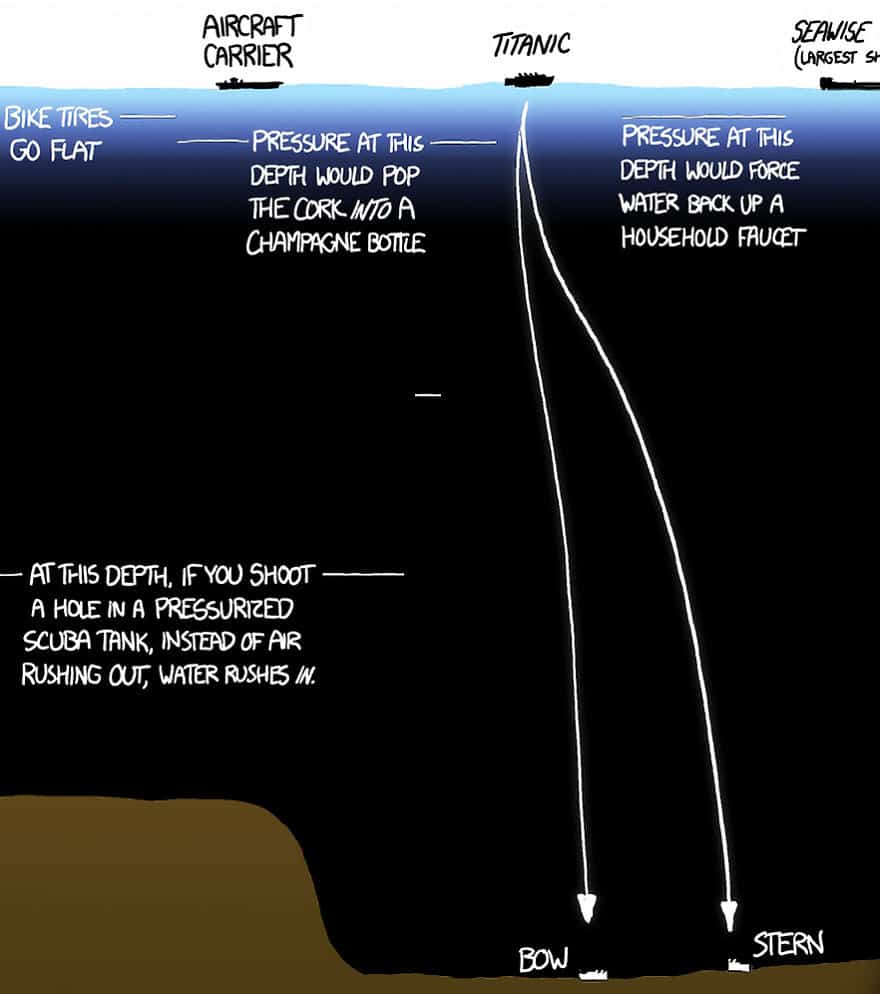 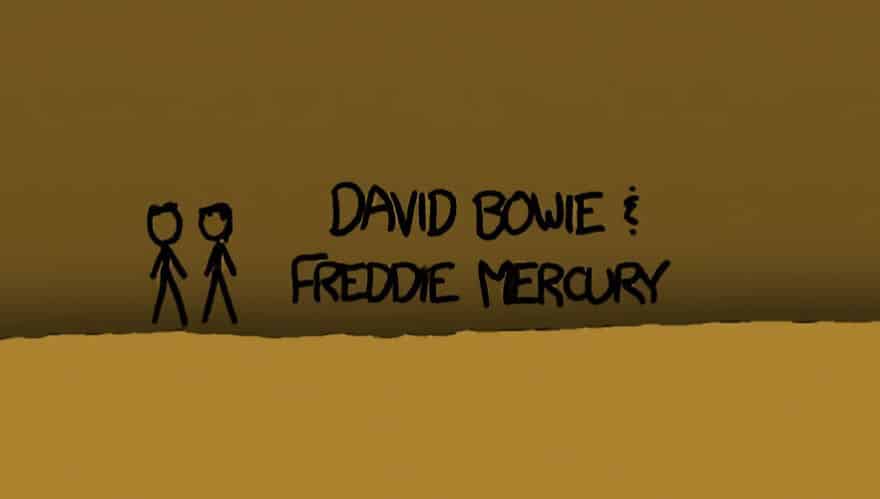 Only 5 percent of the world’s ocean is explored, leaving a great trail of mystery that humanity has yet to unravel. 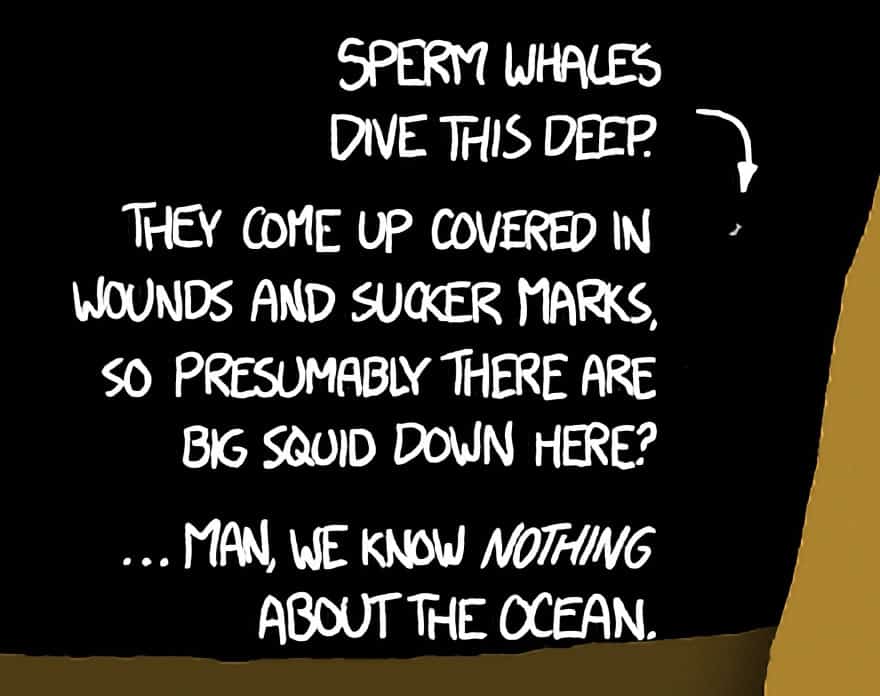 The deepest known point on Earth called the Challenger Deep is in the Mariana Trench, at about 10,916m. 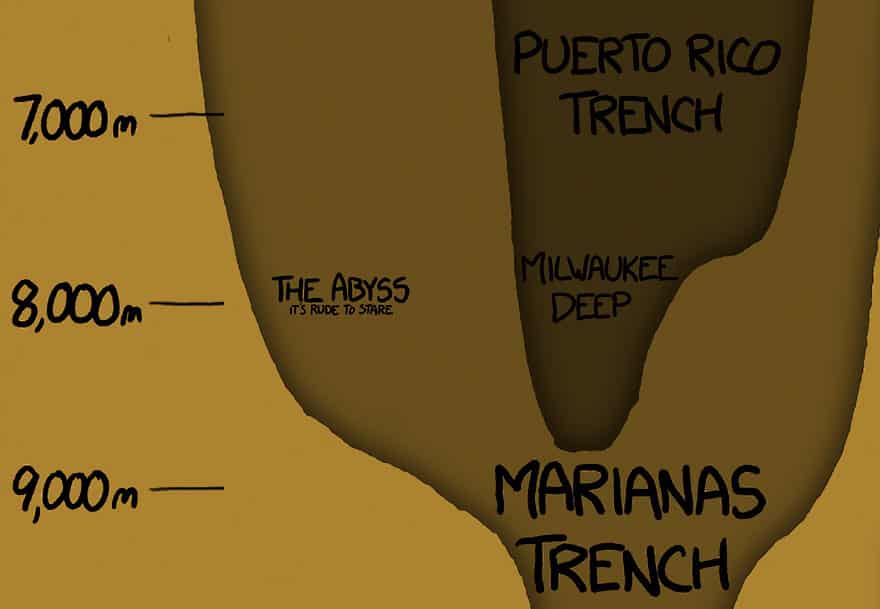 Apparently, he only saw tiny amphipods and no fish. 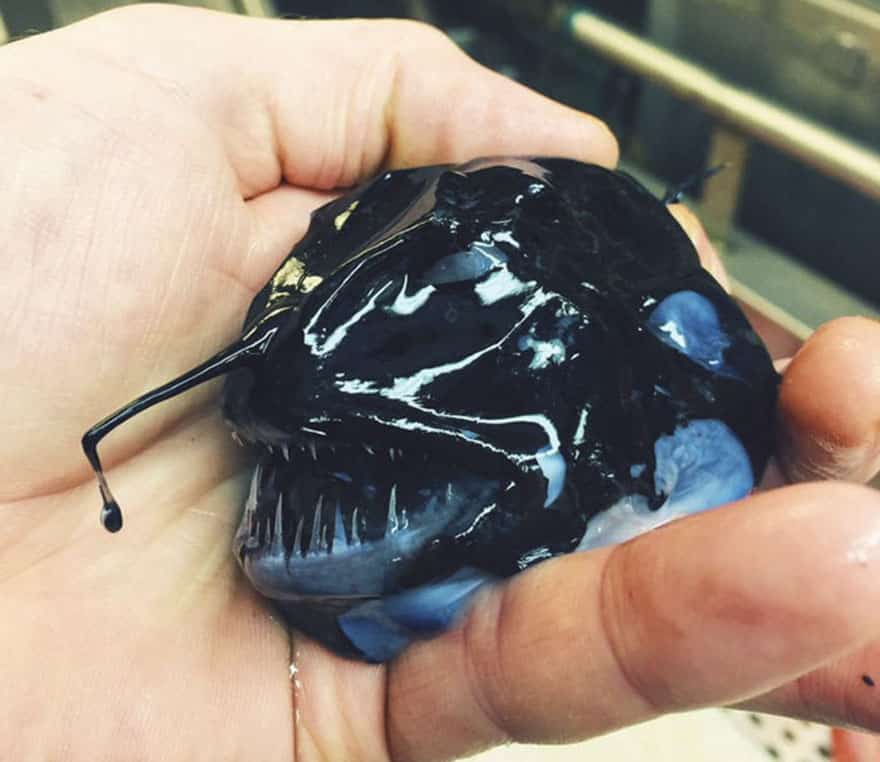 Interestingly, a Russian fisherman by the name of Roman Fedortsov found creatures that seem to exist only in our worst nightmares. See them below: 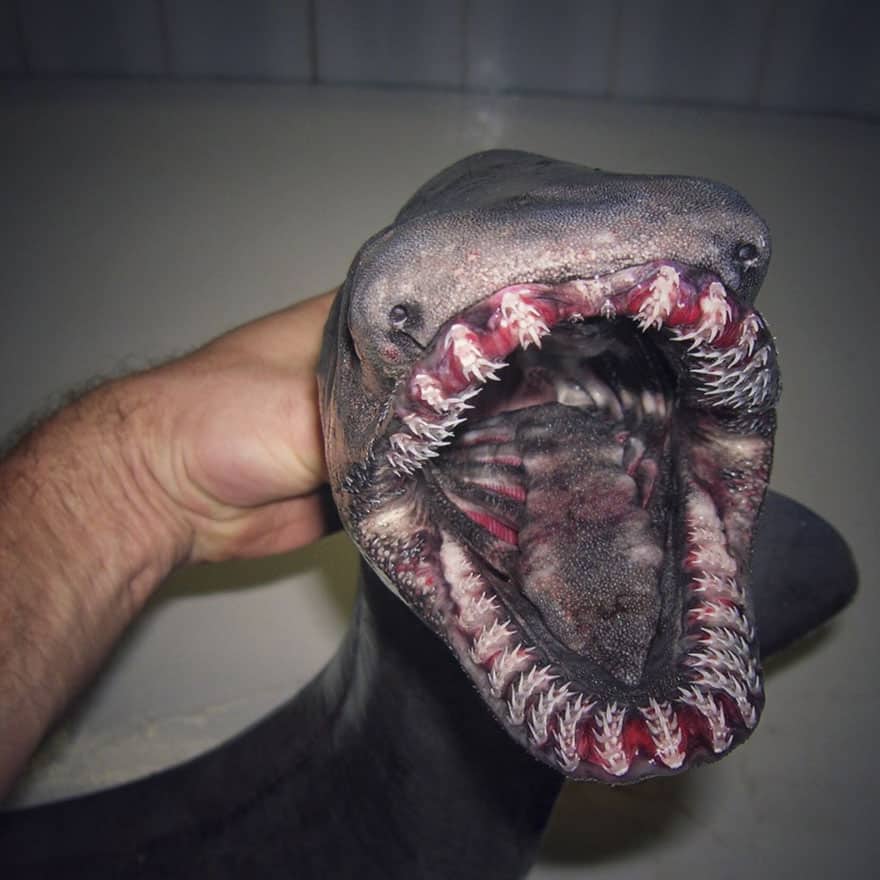 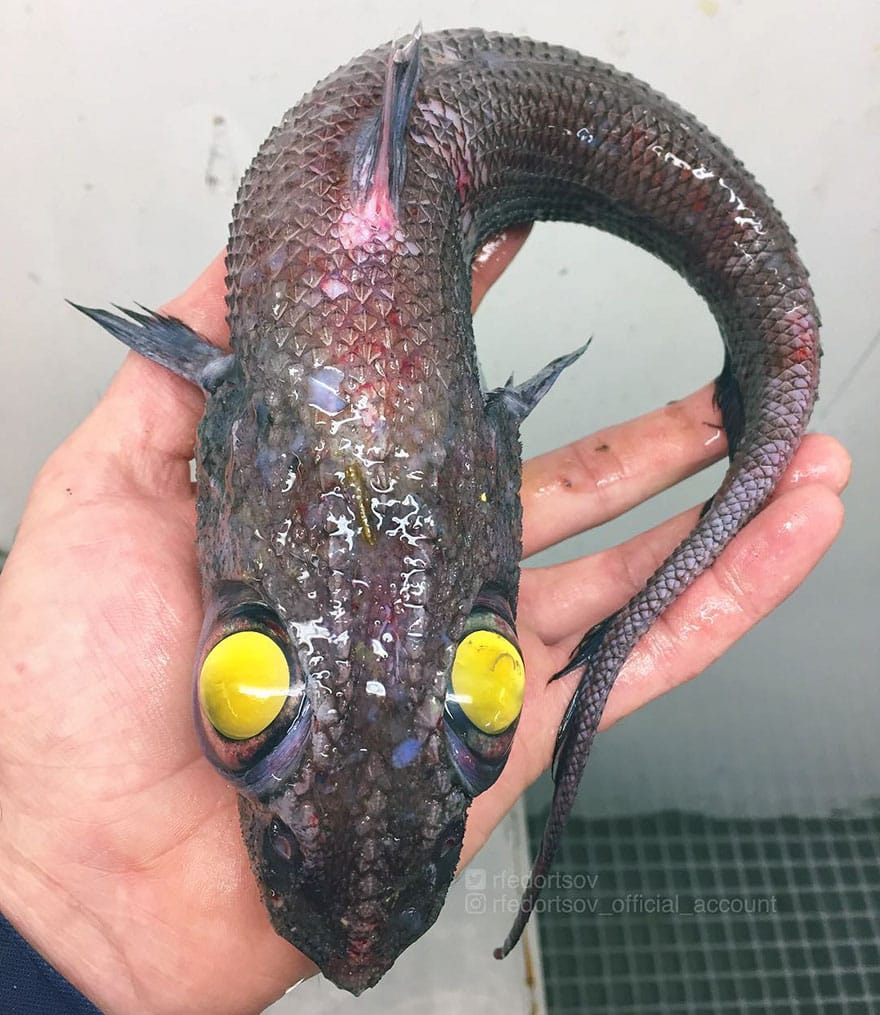 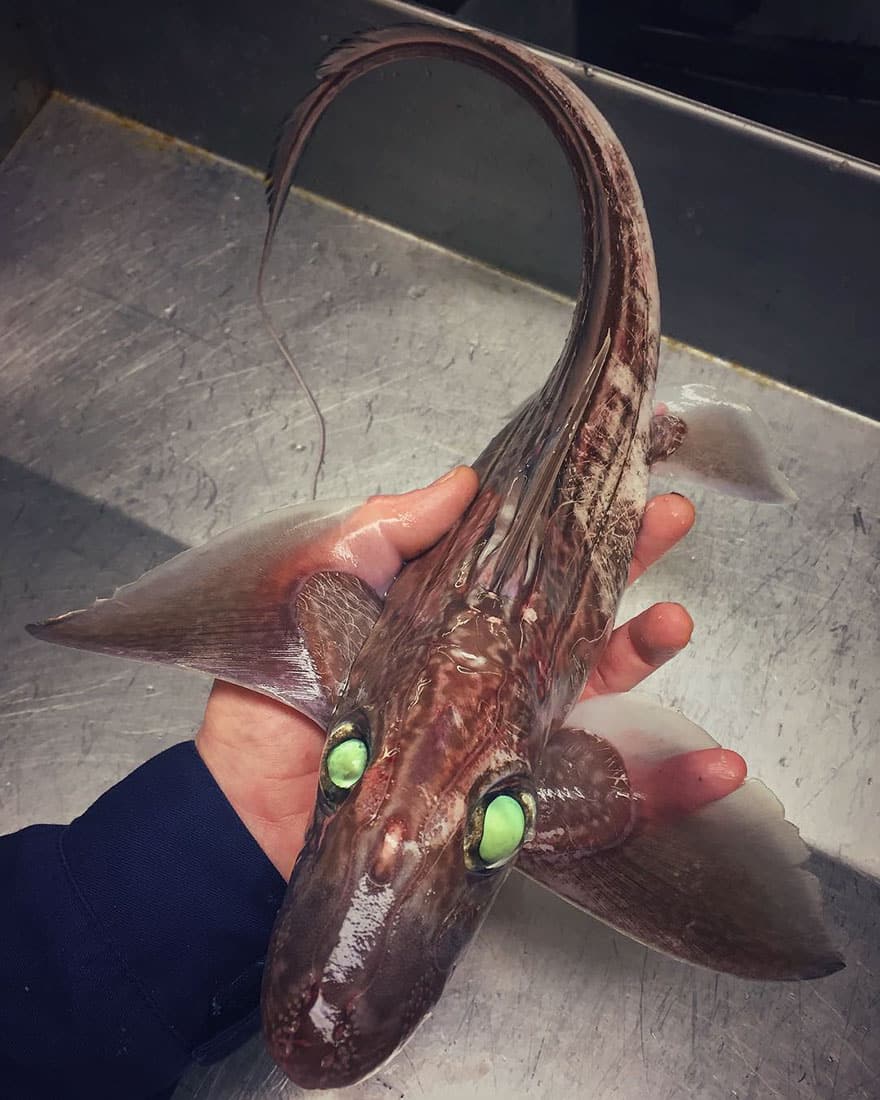 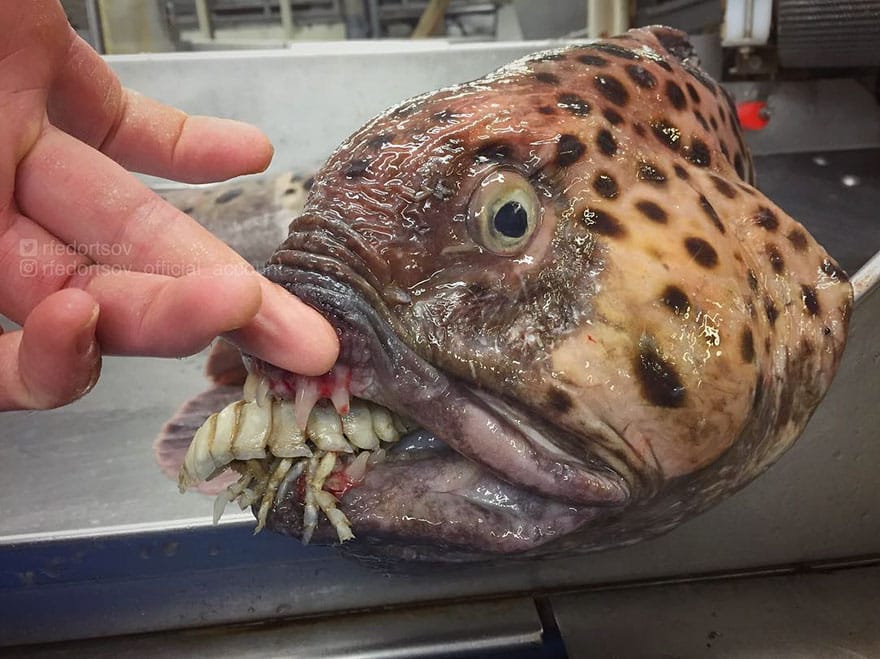 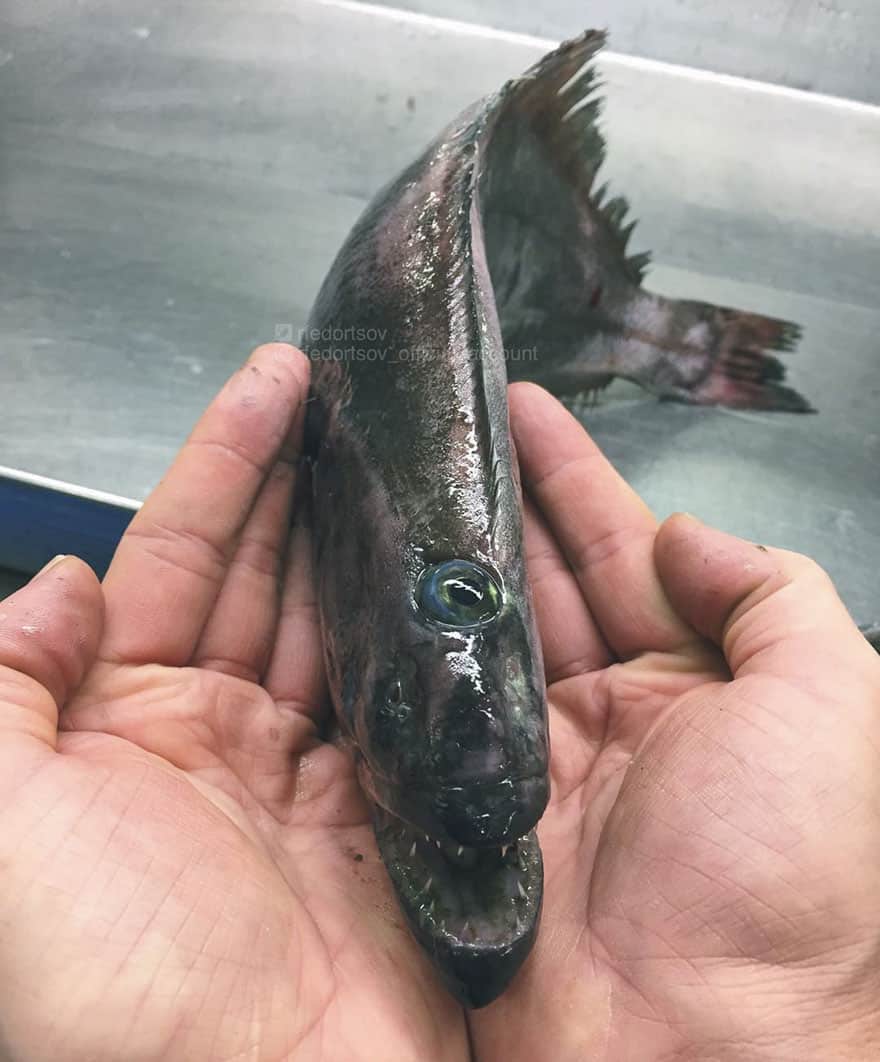 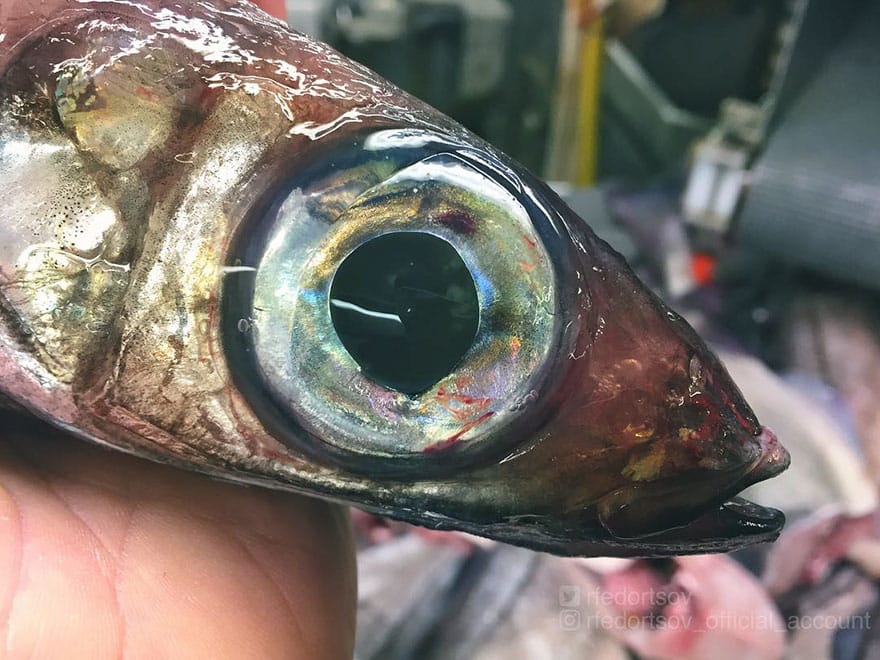 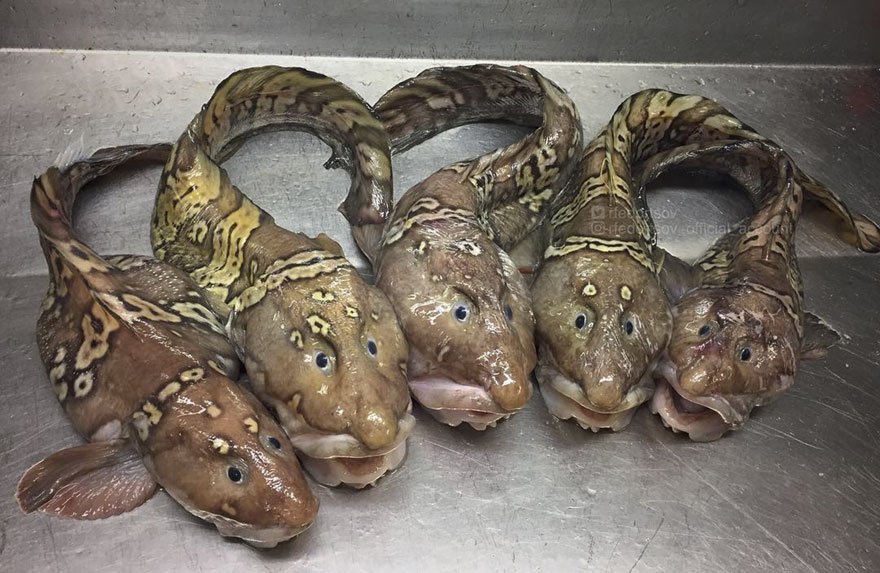 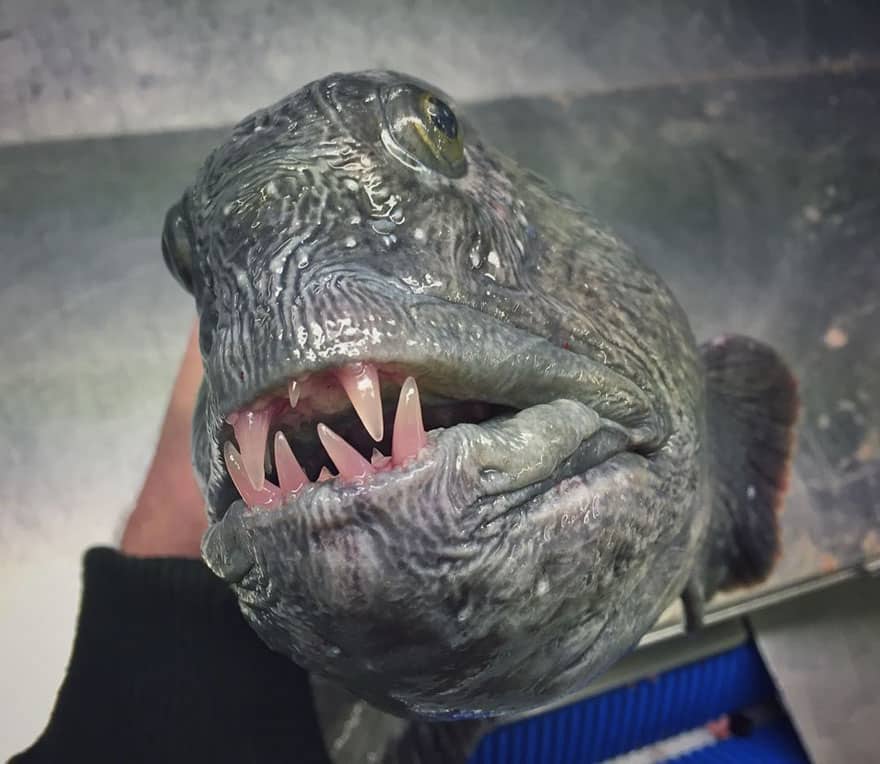 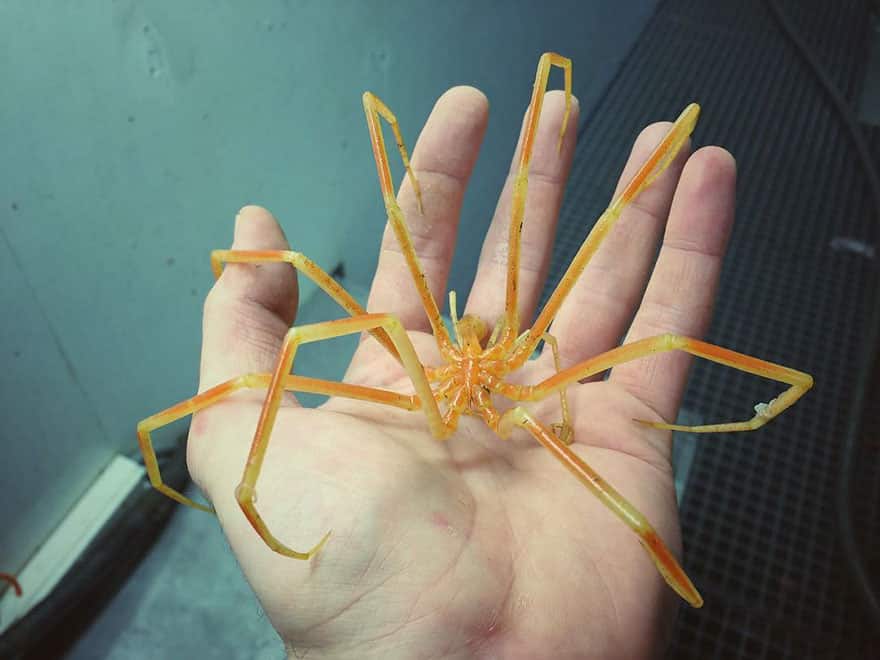 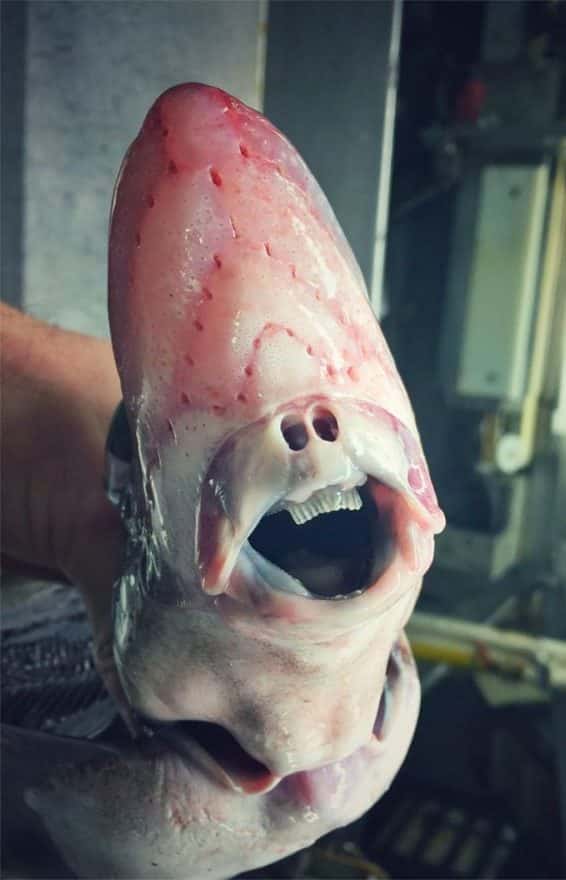 Fedortsov’s pictures alone prove that there are vast creatures living deep down beneath the surface. While the willingness to explore the unexplored ocean is there, humanity is still limited by its means and resources. Perhaps this is a task worthy of completion in the next years to come.