Perhaps it is without any exaggeration when we say that the Samsung Galaxy Note 7 is the most ‘explosive’ device released in 2016. This, of course, is quite literal since the company recalled them because of several reports of explosion.

Meanwhile, the internet has been merciless about the mistake and netizens everywhere posted the harshest and most hilarious reactions to the exploding gadget.

Funnily, Samsung Galaxy Note 7 is making another headline – thanks to this brilliant guy who renamed his Wi-Fi device after the notorious product while he is on a flight.

As we all know, the United States Department of Transportation has implemented a strict ban on the device in order to prevent any potential disasters.

So the passengers and crew of a recent Virgin America flight from San Francisco to Boston were startled to discover that a Wi-Fi device was named after it.

Lucas Wojciechowski, one of the passengers, found out about it when he turned his laptop on. 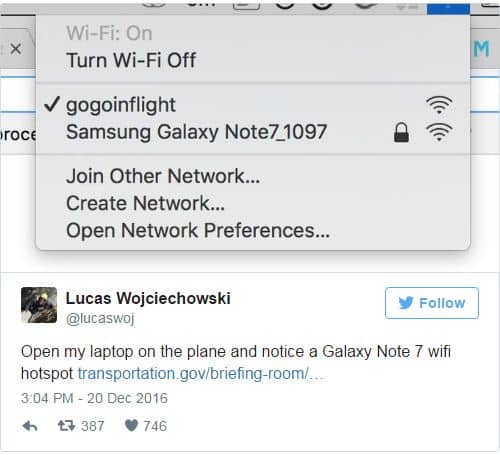 Apparently, it wasn’t only him who made the discovery…

… And the flight crew was dead serious about it!

Eventually, even the captain himself made an announcement.

Since no one wanted to come clean, the crew warned that the flight had to be diverted.

Meanwhile, Serenity Caldwell, editor of iMore, happened to be waiting for a flight to Boston.

Caldwell managed to speak with one of the airline employees and this is what they told her:

So yes, it wasn’t a Galaxy Note 7 in the first place but some genius just thought it would be fun to rename his Wi-Fi after that notorious phone.

In an interview with BBC, Wojciechowski said no further action was taken against the passenger but he hopes this incident will serve as a lesson for others. He suggests using non-threatening names like “puppies on a plane” perhaps.