Horn undeniably came out stronger in the first few rounds, but Manny Pacquiao rocked on the second half of the match. The referee even asked Horn to show something in the 10th round or the fight will be stopped.

Let's get ready to rumble! 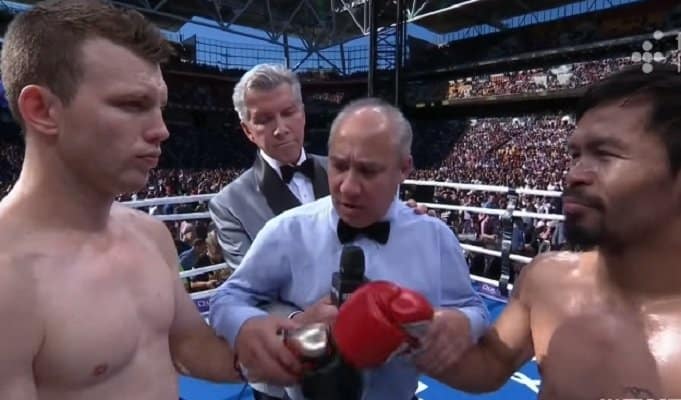 The matched finished after all 12 rounds, and many were surprised when they declared Horn as the winner via unanimous decision. 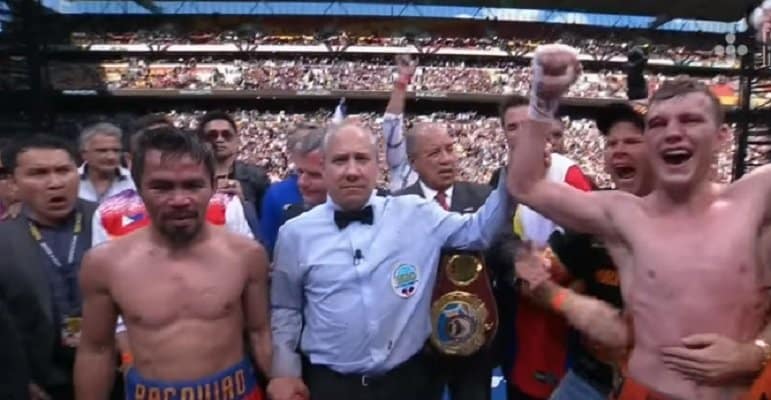 After hearing the result, Atlas couldn’t contain his reaction.

Atlas could not contain his emotions when he confronted Horn. 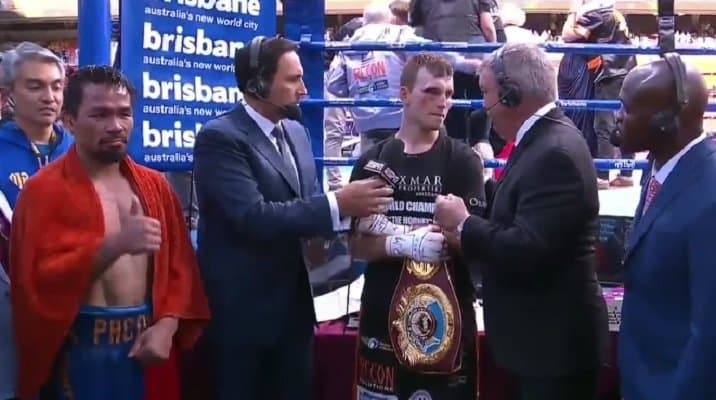 But he wasn’t done there yet.

During the post-match interview, Atlas, who was supposed to interview both the fighters told Horn face to face:

“Congratulations, great effort, but I thought you lost,” he said.

Atlas blamed corruption in the world of boxing for the shocking results of the match.

“It’s a corrupt sport. I’ve been in the sport 45 years. I’m sorry. … It’s a little blunt … but we have a corrupt sport,” he said to open his appearance. “… What else could it be? Corruption.”

Meanwhile, several boxing fans across the globe could not contain their disappointment over the results of the much-awaited match. Some celebrities even took to Twitter their reactions about the game and most of them thought the match was rigged.

The guy on the right won. 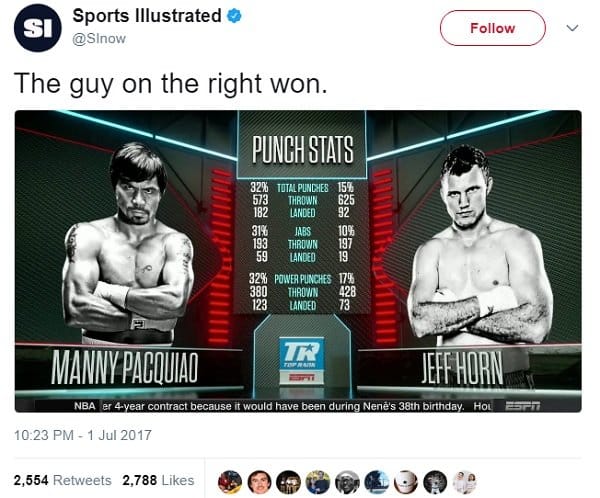 Various international personalities react to the results of the match.

Mike Miller‏ couldn't believe it either.

Post-match photos of the two fighters are also circulating on the internet.
Manny Pacquiao is all smiles with his wife, Jinky. Apparently, he had nearly zero injuries.

Manny Pacquio is all smiles with nearly no injuries. 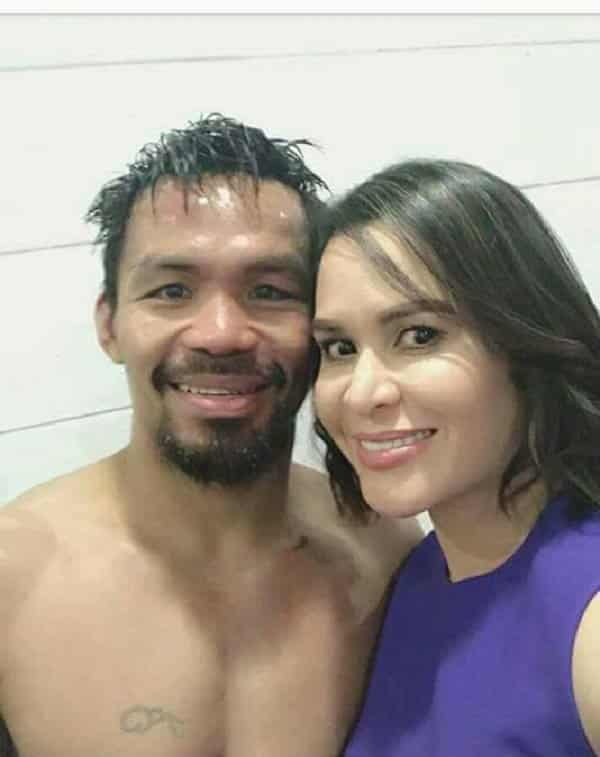 Meanwhile, Horn, the new WBO welterweight champion looked like this after the match. 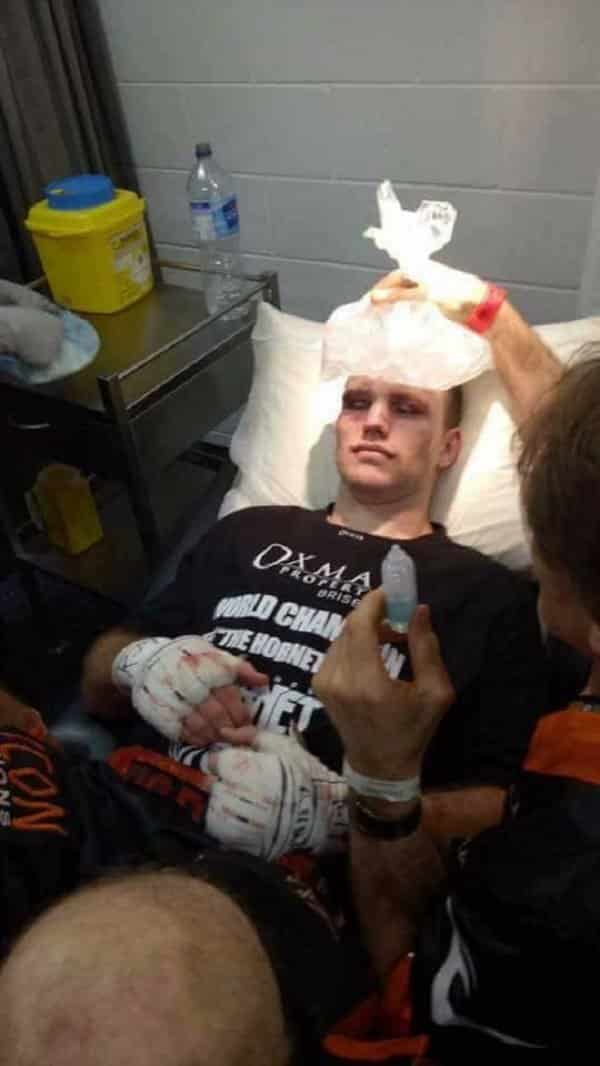 The punch stats also showed a different result from the one announced. 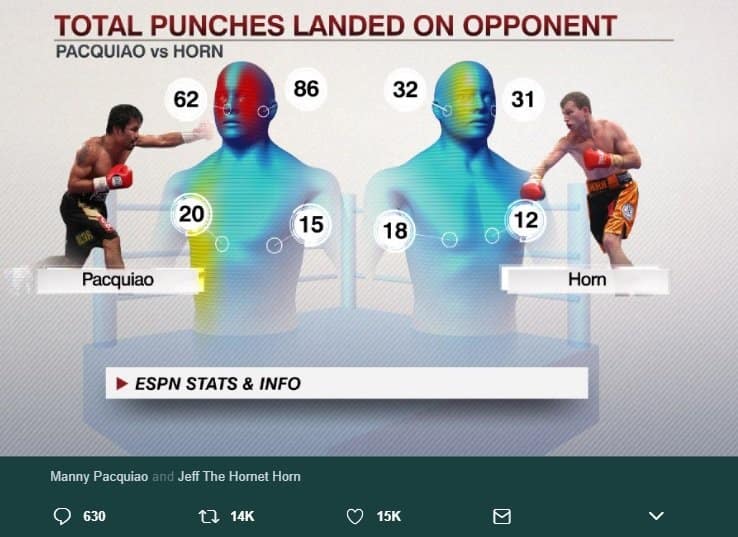 At the end of the day, however, the winner is the one who puts everything into the fight. What’s important is acknowledging the one who fights until the end with angst and perseverance – that is a real champion.

Manny Pacquiao never really cared about winning or losing, he just loves the sport. A real champion fights above and beyond winning. He may retire from boxing, but his heart is always fighting inside the ring.

Amid the controversy, Pacquiao remains grounded and humble, not minding what the whole world is thinking about the fight.

“He deserves it, no complaint.”

That, folks, is what we call humility and sportsmanship.

Here is the video footage of Atlas’s interview with Horn.

Have you watched the fight? Who do you think should have won? Share your thoughts in the comments section below.