How long you’ve been with someone doesn’t matter in a relationship – it’s possible that you wouldn’t know your significant other’s true colors despite going out for many years. The question now is whether or not you’ll be sticking to the relationship the moment you’ll discover your partner’s secret. For one Taiwanese man, it’s the way out.

A story appearing on The Star, citing China Press, told of how this one man was stunned to discover that his girlfriend has been hiding a big secret from him for the last three years that they’ve been together. The man never got the chance to get inside her room despite having dated that long.

A man was never invited to his girlfriend’s room even after three years of dating. 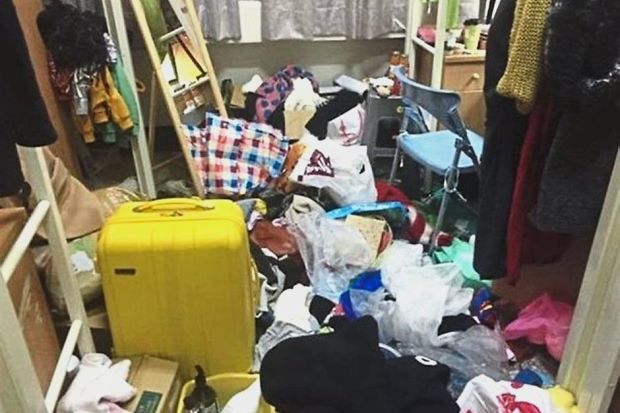 The man reportedly shared in a Facebook post that his girlfriend never lets him inside her room or else, she’ll break things off with him. Whenever he comes to visit, he’d just stay in the living room to watch TV. But one day, his girlfriend’s mother asked him to put some clothes in that particular room while the girl was taking a shower.

Once the man opened the door to his girlfriend’s room, that’s when he got the surprise of his life. He realized why the girl could never invite him in in the first place. He was stunned to see that the girl’s room is such a mess. Soiled underwear and her sanitary pads were found lying everywhere, the report mentioned. Her belongings and most of her clothes were disorganized and can be found on the bed and the floor. One can hardly move around inside the room.

He was surprised to discover her secret: a horribly messy room.

He admits to himself that he couldn’t bear to be inside that room for a longer period of time. As for the girlfriend, she stayed true to her word and broke up with him later.

Although it’s sad to think about the breakup considering they’ve been together for three years, some netizens think that the man was lucky enough to have avoided a lifetime of commitment with the girl, had their relationship continued on. Others believe that the girl’s mother just saved the guy from a possibly miserable life with a disorganized person.

What do you think of the story? Would you break up with someone you think you’re deeply in love with only to discover he or she has filthy habits? Let us know your thoughts!