Dedication and determination come a long way – and for one man, it is quite literal. You see, this man travels 15 miles every day to get to work. Oh, that’s nothing, right? That ought to be just a few minutes’ drive. But this man from Texas doesn’t drive because he doesn’t even own a car – he actually walks all the way to work!

Patrick, a 52-year-old man, endures a two and a half hour walk from his residence in Plano, Texas all the way to Braum’s, a burger restaurant and ice cream joint where he works as the manager. Officer Branson from the McKinney Police Department noticed Patrick’s amazing effort and perseverance so he posted about it on their official Facebook account.

Written on McKinney Police Department’s Facebook page was as follows:

Ofc. Branson checked on a man walking on the shoulder of 75 today. That man walks 2.5 hours to work from Plano to Braum’s in McKinney 5 days a week and has a GREAT attitude. Meet Patrick….Ofc. Branson gave him a ride up to work and I think meeting him was the highlight of Ofc. Branson’s day!

Officer Branson gave Patrick a ride on his way to work. 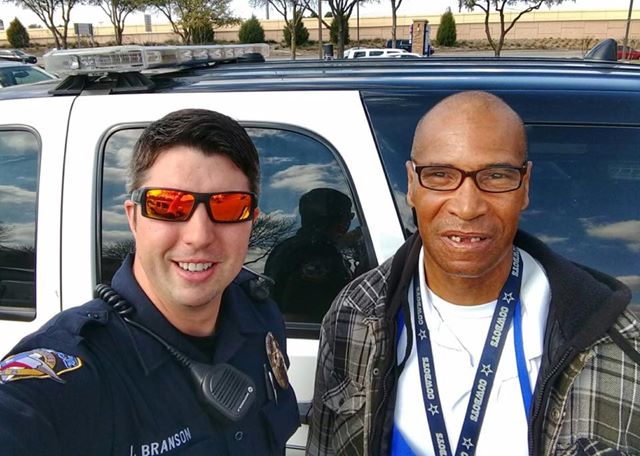 Patrick doesn’t put much meaning into what he does to get to work, and he believes that he is just doing what he think is necessary. Probably for him, showing up at work every day is not something that should be noteworthy. But the effort behind that feat and his deep care and consideration for his colleagues are something that we don’t see in every worker. With the struggle that it takes for him to be able to flash that smile and greet his co-workers “Good morning” every single day, some may complain, some may resign, while some others may just have disappeared without notice. But Patrick did not.

In an interview with NMC Dallas, Patrick said:

He used to work at a Braum’s branch in Piano but he got transferred to one that is 15 miles away from his home. He agreed without any protest. Now, he grabs a ride with a co-worker on his way home.

When asked about his transfer from Plano, he said:

“I said ‘OK,’ and my commitment to them was, I have to be at work so I’ll be at work, whatever it takes.”

His positive attitude and beautiful commitment have struck the hearts of people who heard about his story. In fact, one local resident was deeply touched that he initiated a fundraising campaign for Patrick via the website GoFundMe.

Hats off to you, Patrick! Keep on inspiring people with your awesome dedication!