We all have someone who we feel we are obligated to buy a gift for, but the task of shopping for a present becomes pretty difficult when they refuse to share any ideas on what they want. It is also hard to come up with something when the recipients have impeccable taste or when they treat themselves to all of the things they want anyway.

When it’s almost impossible to shop for our beloved friends, it can be a good idea to give the most typical surprise but with a touch of uniqueness. Christmas cards may be too old-fashioned but when you make it customized and add some hilarious feels to it, they can be the most thought-of gift they would appreciate.

The Bergeron family is famed for the funny Christmas cards they create every year for their giveaways. 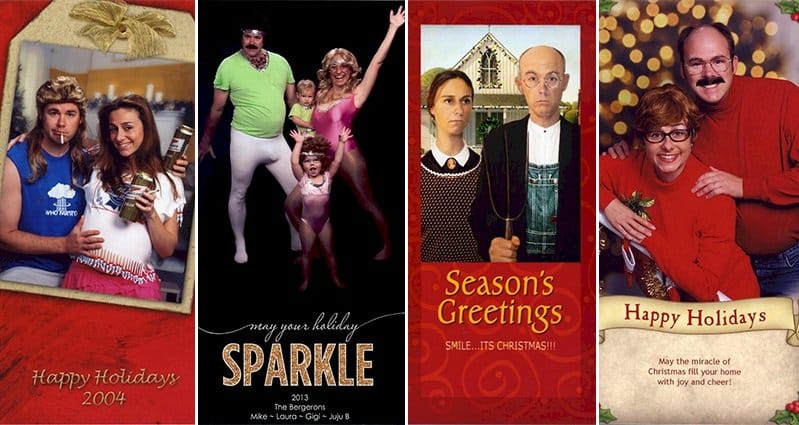 The Bergeron family has been sticking to their Christmas card making tradition for 15 years now, and their bold ideas on what to place on the covers are making their friends really happy every holiday. They produce one of the funniest Christmas cards you’ll ever see that will surely strike a giggle among the recipients.

This creative family started the unique tradition in 2003. Mike Bergeron and his wife Laura dress up and pose with their daughters Gigi and Juju according to their selected hilarious theme for the year. The set up differs every year and a funny story comes with every photo.

The Bergerons find inspiration from their local culture, pop culture, or whatever that comes to their mind. Since their friends started receiving their unique Christmas cards, they just can’t wait for another holiday to see what the Bergerons have in store for the year.

Mike Bergeron, himself, revealed stories of some of the photos they already converted to cards. Here are the cards they released from 2003-2017.

The family named their first card “Forty and fighting it.” Mike shared about the photoshoot:

“The photographer tried to move the light away from overhead and I had to ask her to shine it directly down on me – she didn’t know how to tell me that it was reflecting off of my head and making me look like I was balding. Finally, I just told her that the balding look was what I was after. She had no idea that we were dressed up in costumes!” 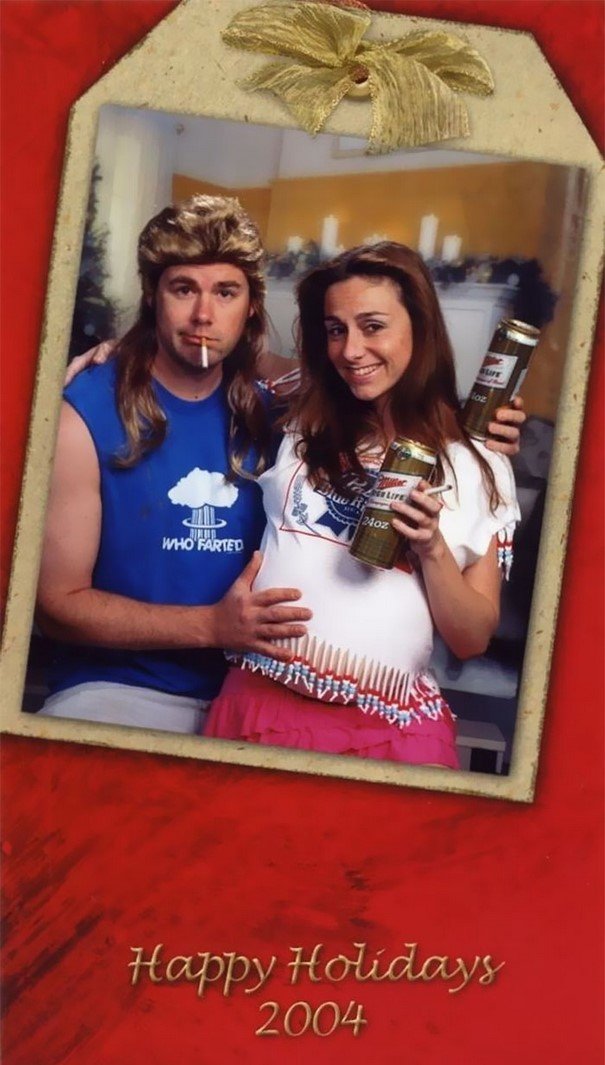 The family uses the JC Penney Portrait Studio to print their cards. Mike said, in this specific year, the woman at the cashier didn’t get the joke of the cards, believing her wife was really pregnant as she appears on the photo. He then cracked the awkwardness saying:

“Actually, she’s not really pregnant…and if she was, I wouldn’t let her drink beer or smoke cigarettes…and, as you can see, I don’t really have a mullet. It’s a joke card.”

However, the woman simply gave him a blank stare, seemingly remaining clueless about what he was talking about. 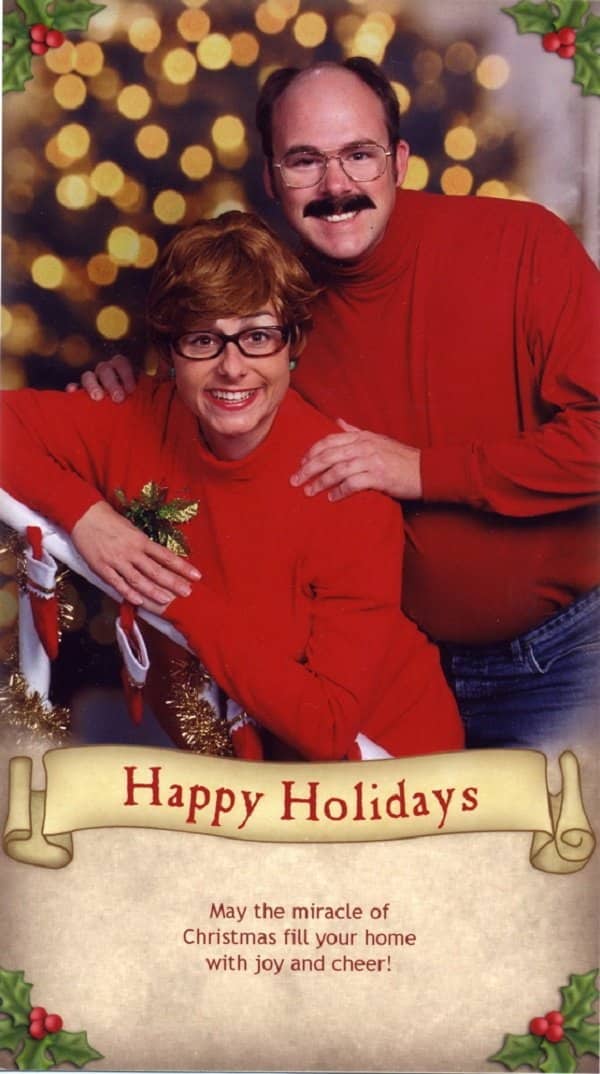 Mike chose to make a joke about their family’s balding problem. He said:

“At the age of 32, it was apparent to me that my days were numbered and if I wanted to make fun of being bald, then this would likely be my last chance before the joke would become reality. So, on the afternoon of the photo shoot, I had Laura shave the hair off of the top of my head…and I’ve been bald ever since.”

He also said he had to come up with excuses on why he suddenly shaved his hair. He had “I joined a cult” or, “I’m a racist” or, “Chicks really seem to like that Vin Diesel guy, so I thought I’d give it a shot,” and “I’m a competitive swimmer and I wanted to shave some time off my laps” as his excuses. A few years later, he was surprised that someone still remembers his excuses on why he chose to go as a skinhead, and this, he said, made him wonder who else still believe that he really joined a cult. 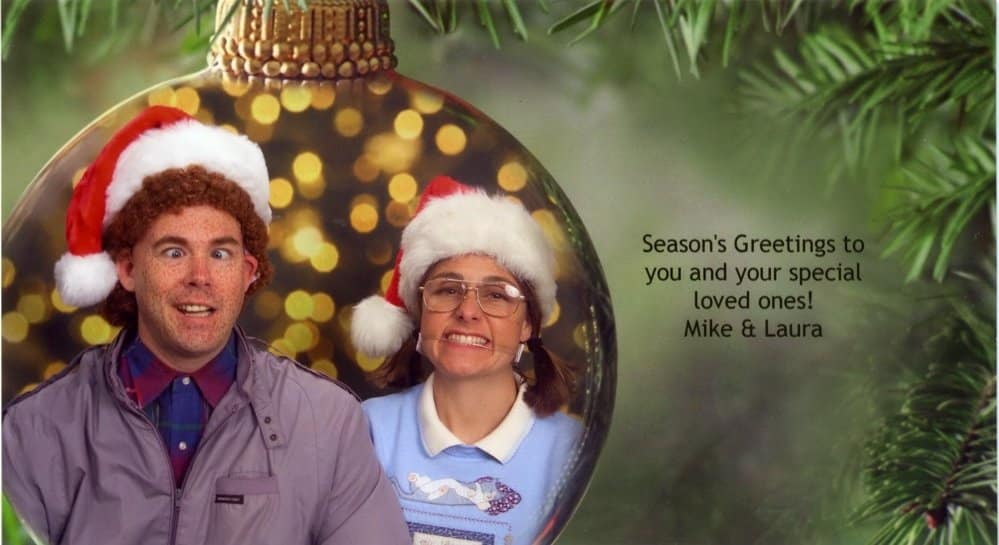 Apparently, Mike’s idea of a themed Christmas card isn’t unique at all. He shared about where he got the idea and made it the inspiration of their 2006’s photoshoot. He said:

“A couple of years before we started this tradition, my friend, Jeremy, worked during the holidays in a photo studio. If he thought that a family portrait was particularly funny, he would print a copy for himself and put it on display in his living room. They were all awkward and wonderful in their own way, but there was one photo, in particular, that was so delightfully goofy and uncomfortable that it has always stuck with me. This card is an effort to recreate the magic of that card. I’ll be the first to admit that we fall terribly short, but I think it still manages to bring some joy to the holiday season!”

Mike said this particular card is his wife’s grandmother’s favorite. Their tradition is already catching the attention of many, and like others who grow into fame, the Bergerons got themselves some critics who commented on their 2007’s card. Mike debunks the accusations though saying:

“Overshadowed by controversy, some “purists” have accused us of cheating with this particular card because we Photoshopped it. For those who love it, thanks…we love you, too. For those who feel we cheated…look, we actually dressed-up in costumes and took a photograph for this card (we even bought a pitchfork!). However, since the original work was done with paint on canvas and did not look like a real-life photo, we felt it would be a better choice to manipulate our photo to look like the painting. Since neither Laura nor I are graphic designers, it was quite difficult and time-consuming, but we are very pleased with the way it came out. Anyone who thinks we took the easy way out on this one is simply oblivious to the effort it required.” 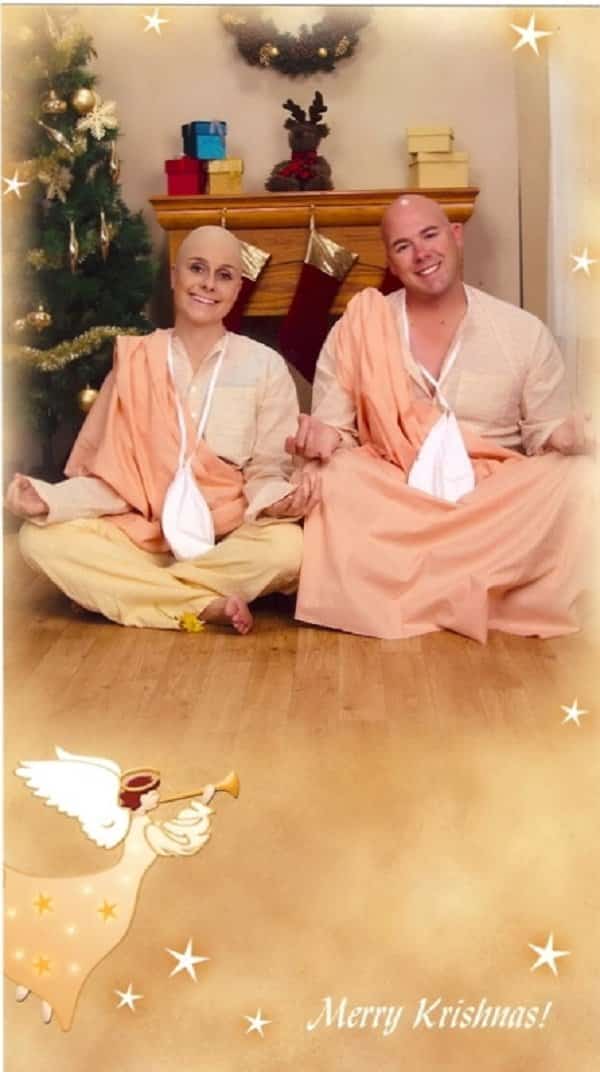 Miscalculation is all that Mike has to share about this card they made. He said:

“We got started a little late this year, which meant that when we went to JC Penney to take our picture, there was a one hour wait. We walked through the mall and wound up eating dinner in the food court. I only wish that we had brought flowers.” 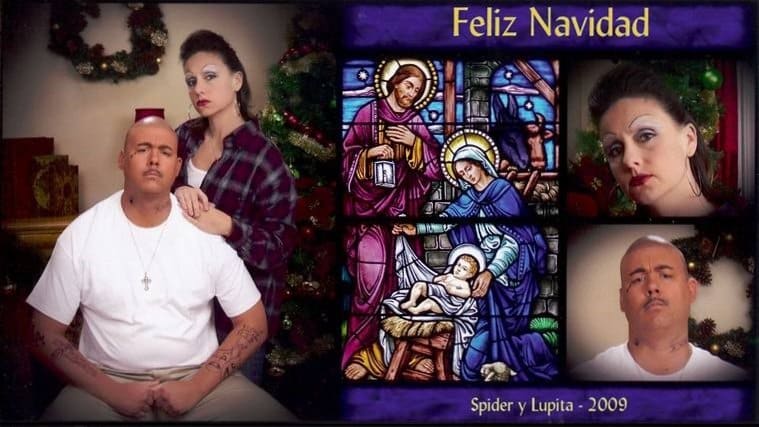 Mike believes this is the best they created among all their cards. He said:

“This is my personal favorite. Some cards are obviously a joke, but when a card looks as real as this one, it is something special. Again, on this particular year, we weren’t able to take the picture until after Thanksgiving, so the JC Penney photo studio was very busy and we had to wait for an hour to get in. Understandably so, Laura was nervous about walking around the Westminster Mall looking like we did, but I reassured her by saying, “Seriously? Look at us…nobody is going to fuck with us!” I was right…not a single person would even make eye contact with us.” 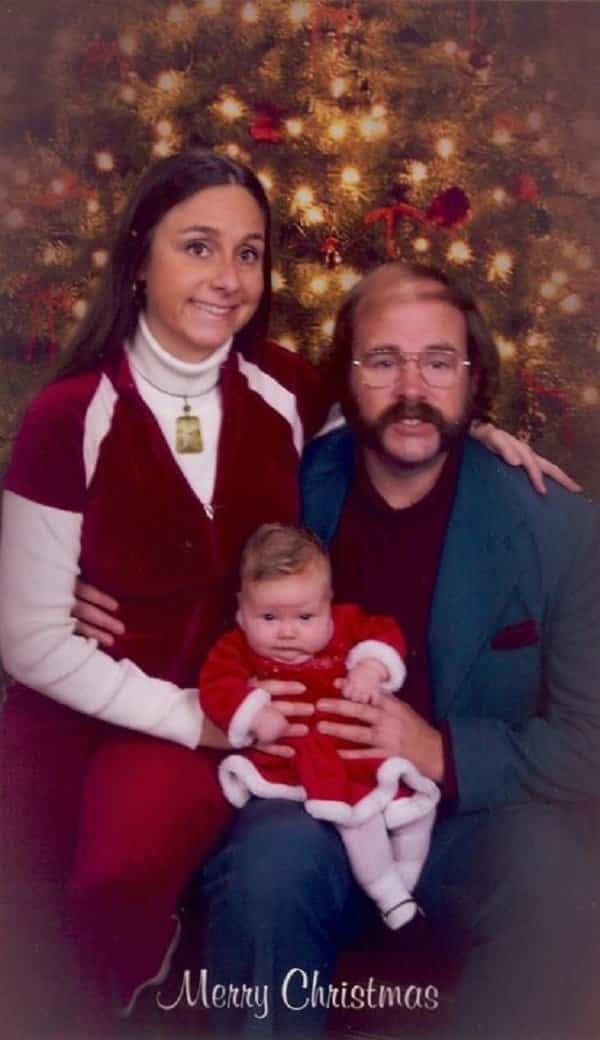 This is the first year that baby Gigi appears in the card. Mike also shared how this card fulfilled his lifelong dream of sporting a combover as he knows he will grow up to be bald. He said to share further about this photoshoot’s story:

“May your holiday table be a smorgasbord of cheese balls, fruitcakes and hams! In many ways, this card best represents what we were trying to achieve from the very beginning. Our concept was inspired by the inherently awkward nature of holiday family photos that has now become so popular in the age of the Internet.”

“We wanted to try to capture that awkwardness (in a next level sort of way) and give everyone we know the gift of having a funny card on their fridge that would capture the spirit of the holiday season. When they had people over to their house during the holidays, they could take pleasure in seeing their guests’ reactions upon viewing the card without realizing it was a joke.” 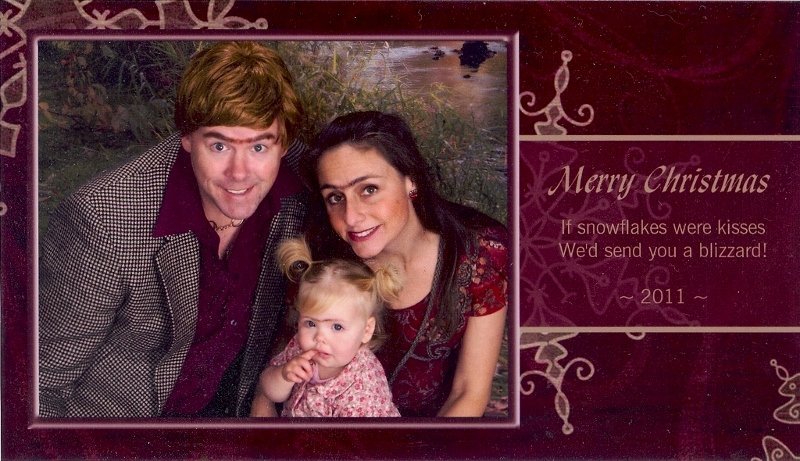 Mike doesn’t feel contented with this one. He believes they could have done the shoot better saying: “I love the idea for this picture, but personally, I think it could’ve been better executed. Don’t get me wrong, we look funny & Gigi really gives the card a whole other dynamic with her incredible cuteness, but I think this concept had the potential to be our best card ever, if we had done it right.” 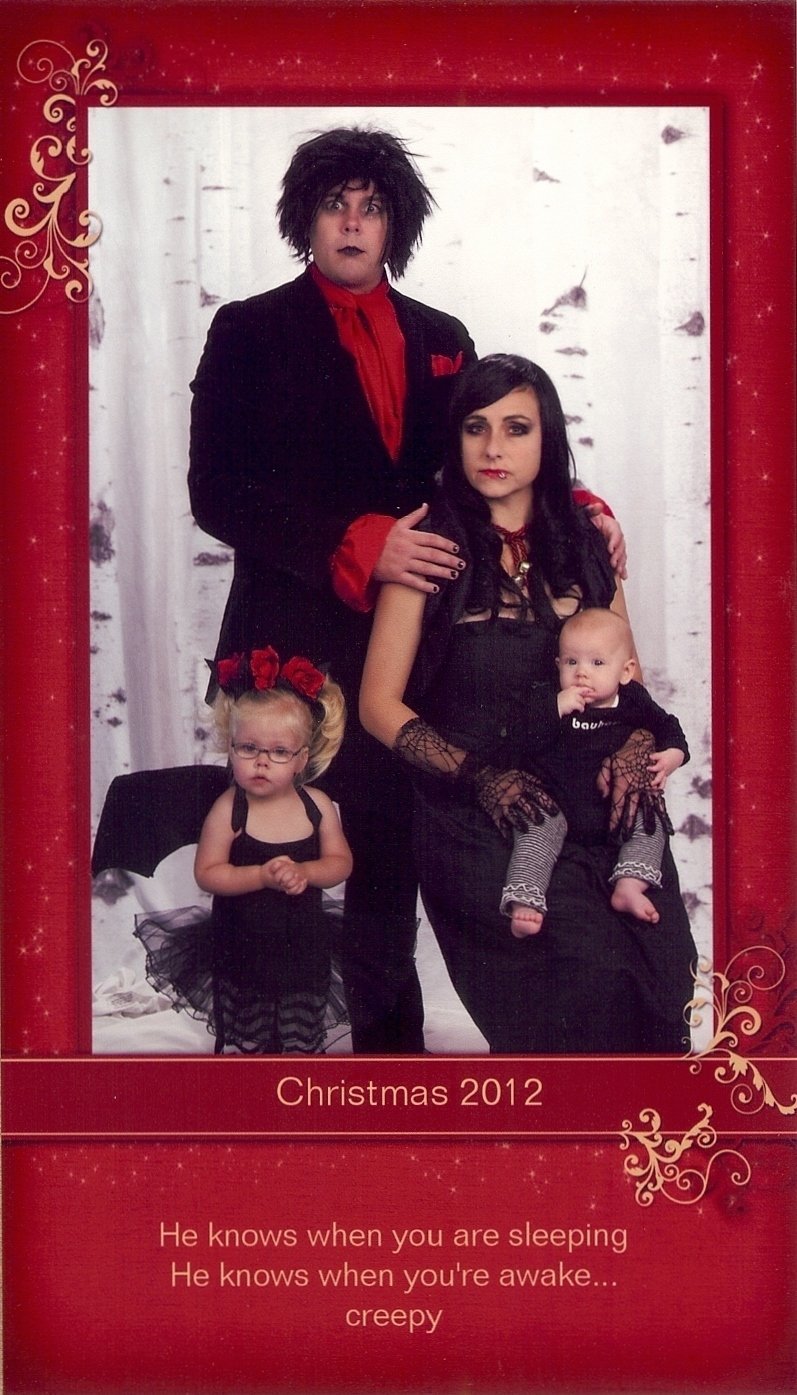 The Bergerons chose darkness, inexplicableness and weirdness for this shot. While Mike plays with his expression and Laura and Juju sport the creepy face, baby Gigi balances the chills with her adorable headband.

Going back to the 80s is the Bergerons’ idea of cuteness in 2013. The girls totally killed it, but Mike couldn’t look any funnier in his tights. Mike says about this photo: 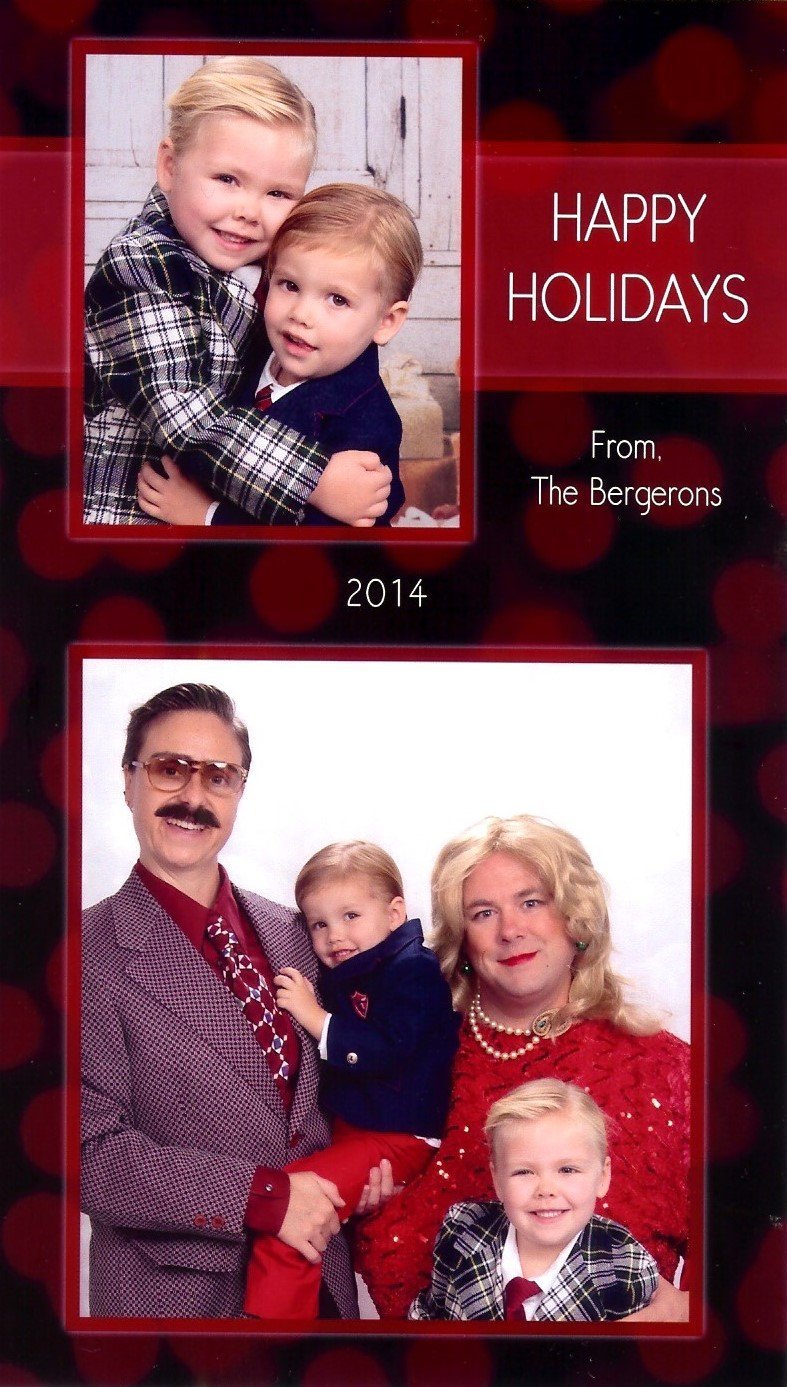 Switching roles is a cool idea. Mike is almost unrecognizable with his beardless face. He even placed an extra effort on shaving his legs, only to find out their shots will be from waist up. He shared:

“I doubt if anyone at the JC Penney Portrait Studio even thought twice about Laura and the girls, but it was a pretty busy year and we were waiting for about 45 minutes for the photographer to be available, so I am certain that my presence made a lot of people uncomfortable in the studio’s waiting area. I had to hunt high and low for shoes that would fit me (thank, Lane Bryant) and, of course, I shaved my legs, so you can imagine how excited I was that we wound up choosing a shot from the waist up. And, seriously, how friggin’ cute are those boys? If we had given Gigi glasses, I think she would’ve looked an awful lot like Ralphie!” 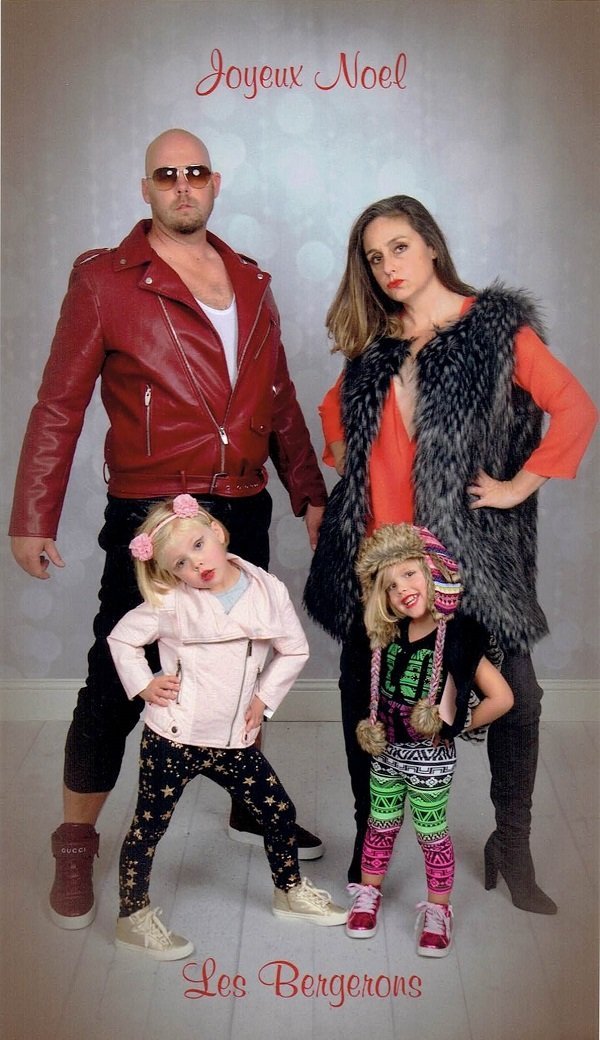 This family has some taste in fashion. The parents rocked the leather and fur while the kids looked fierce in their red lippies and eyeliners. 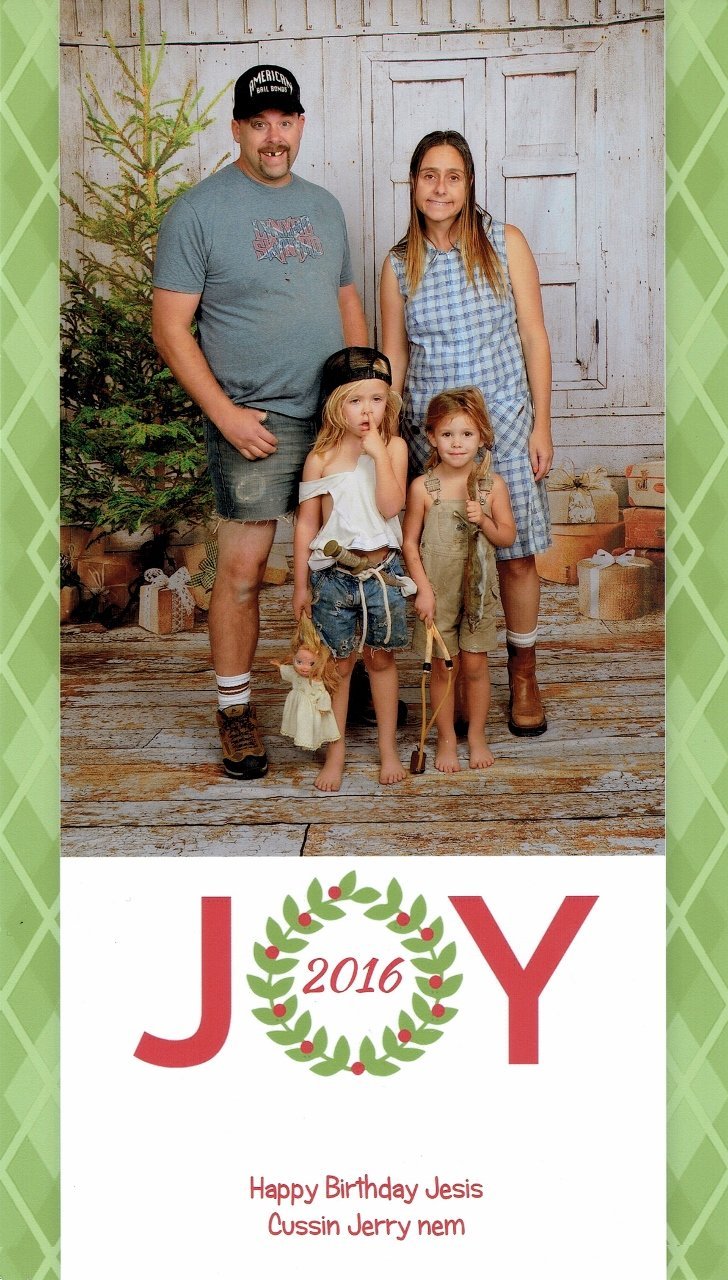 Looking like they’re from the countryside, it was the nose-picking Gigi who dominated this shoot.

The family put on a fake tan to look like they’re overly sunburned from a long beach vacation.

You don’t really need a lot of money and to come up with ideas to make your loved ones happy this coming Christmas. A little humor and a bit of creativity could make the perfect Christmas gift you can give way this special holiday season.