Organ transplant is nothing so shocking at present. Liver transplant, heart transplant. kidney transplant even skin transplants… all of these are perfectly acceptable to extend the life of the patient. But what if it is something else, something like a full human head transplant? Doesn’t it sound so eerily similar to a “Frankenstein” experiment to you?

Italian scientist and transplant doctor Sergio Canavero is trying to convince billionaires from all over the world, like Mark Zuckerberg for donations so that head transplant can be carried out. One might think, who would be in their right mind to volunteer for such an endeavor? Well 30-year old Russian tech scientist, Valery Spiridonov eagerly volunteered upon hearing the proposition.

What compels Spiridonov to try this unknown and possibly life-costing head transplant procedure?

Spiridonov suffers from a degenerative muscle-wasting disorder that restricts and slowly takes away his body’s ability to move. As of present, the disorder has rendered Spiridonov paralyzed from the waist down. This has been his motivation to try for the procedure rather than completely giving up on his condition once it spreads on his upper torso as well. He also bravely says that if the operation succeeds, then it can herald ground-breaking advances in medicine and surgery, and if it fails, it paves the way for improvement of our technology. Such noble thinking!

But how large is the chance of a head transplant becoming feasible? According to Canavero, he and his colleague Ren Xiapoing from China has already done several successful head transplants on animals. They’ve started on mice and then progressed to larger animals such as monkeys. Canavero claims that the monkey they transplanted was able to survive after surgery, but after 20 hours they decided to euthanize it. He goes on further to claim that Xiaoping has already performed a successful human head transplant in his home country in China.

A picture of the alleged successful head transplant on a monkey 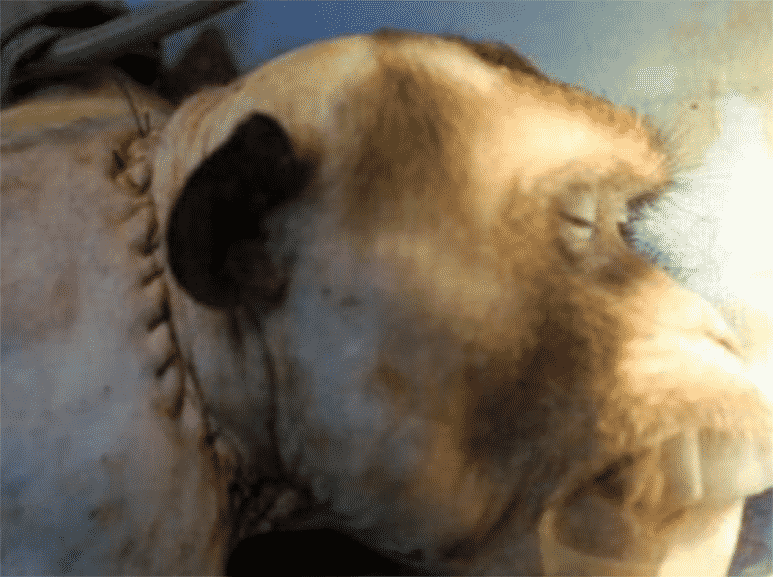 As a scientist as well, Spiridonov is aware that these kinds of transplant is useless if the neurons in the muscles are not able to merge or connect with the neurons of the transplant. But due to the yet unnamed procedure that Canavero and colleagues use, this could be possible. A bit of explanation provided is that the secret ingredient is PEG or Polyethylene Glycol. PEG is commonly used in laboratories to fuse together cells or tissues such as in hybridoma cell culture techniques. Perfectly cutting the spinal cord of the head as well as the nerve endings on the donor body is also very crucial to reconnect these with PEG as if nothing happened

Watch more of Canavero’s explanations on the head transplant here.

Even if the procedure might be theoretically feasible and Canavero claims of successful transplants in experiments, the rest of the surgery societies are still unconvinced and calls the attempt unethical and impossible. Be that as it may, the patient and the transplant doctor are determined and thus the call for donations to see this real life “Frankenstein” experiment. Aside from financial issues to carry out the experiment, a donor body for Spiridonov is also still a problem. Canavero says that for biological compatibility, a Russian donor body is preferred.

Even if I personally imagine that cutting off a man’s whole head and transplanting to another body is something straight out from horror movies, it is also very fascinating to think about. If we will think progressively, many of our procedures today would have seemed impossible to doctors and experts hundreds of years ago as well. But these procedures have succeeded now. If this succeeds, we might see Stephen Hawking walk again, and it’s as if humanity is closer to immortality. Imagine just swapping out bodies when it gets old, as long as we preserve the integrity of our brains!

Well sometimes breakthroughs in Science really requires some bravery, and the most astonishing ideas. If this comes to fruition, we just wish it ends up for the better for the patient. How about you, what are your thoughts on this shocking matter? Let us know in the comments.