Sasha Bouis, 38, was an MIT graduate who worked at Standards & Poor’s as a computer programmer. His wife, Tara, 32, was a special education teacher at an elementary school in the British Virgin Islands. They were both successful in their careers, but they decided to drop everything.

Now, the couple runs their own business, which they call ‘Pizza π’.

‘Pizza π’ is like a food truck; however, Sasha and Tara serve great-tasting and “interesting” pizzas to customers in the middle of the ocean! 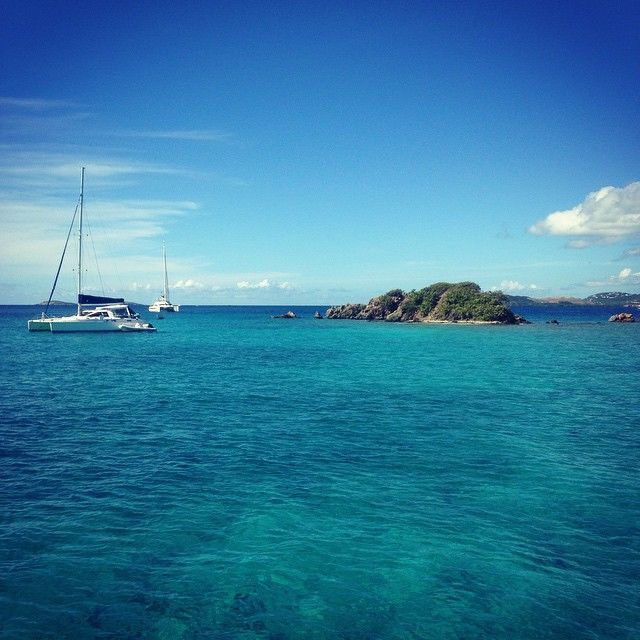 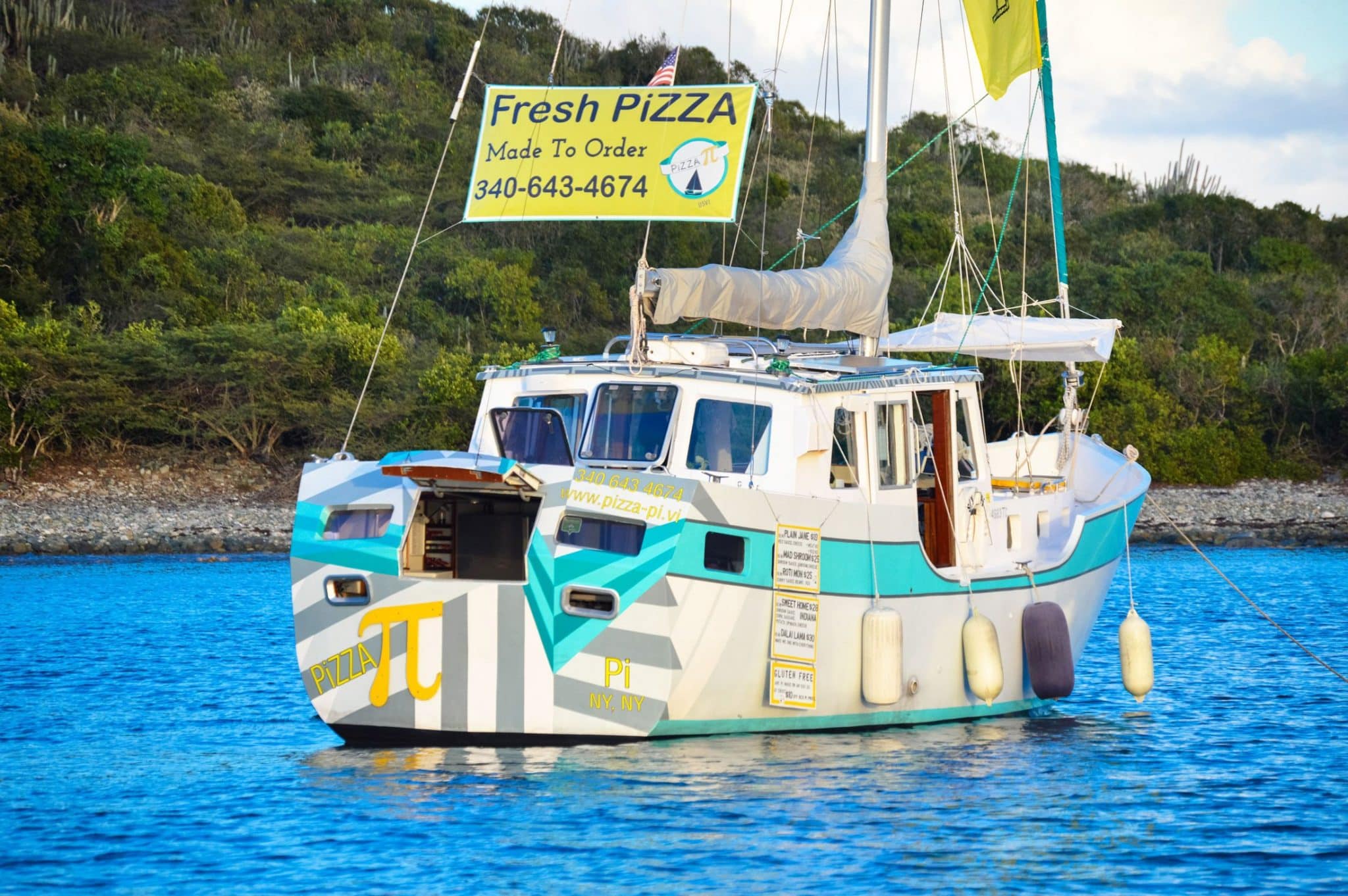 “Pizza speaks to everybody,” Tara said. “Food trucks had become a part of everyday life – food boats had not. We knew that the concept was strange, but we thought it could work because the food is very recognizable.” 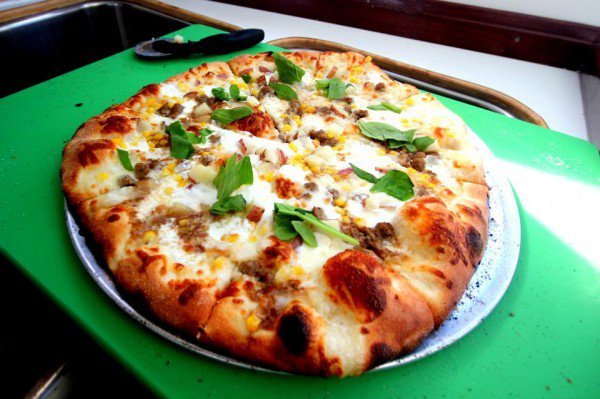 How it All Started

In 2005, Sasha moved to Puerto Rico to work on sailboats after quitting his job. But he met Tara when he moved to the British Virgin Islands to teach sailing at a summer camp. They soon fell in love, settled in the Virgin Islands, and decided to tie the knot in 2012.

Since they both love the ocean, Tara left her teaching career behind, and the pair started to work on yacht charters together. Sasha captained and Tara became a gourmet chef. She even won the BVI Charter Yacht Show Culinary Contest a couple of times.

They both loved the BVI, but they know that something’s missing from the place—pizza.

The idea for the pizza boat came a few years later when they stumbled upon Pagan—a dilapidated 37-foot sailing/motor boat that had been abandoned for almost ten years. They took a chance on the termite-infested ship because the aluminum hull was still in one piece. The restoration was expensive, but they managed to finance the project themselves.

“No one – including us – had any idea if it would work,” Sasha said. “So we weren’t comfortable trying to get investors because we didn’t know if we’d be able to pay them back.”

They worked on the Pagan for over two years. With Sasha ‘s knowledge in mechanical engineering and some helpful YouTube videos, they were able to transform the boat into the commercial-grade pizza kitchen they had imagined. 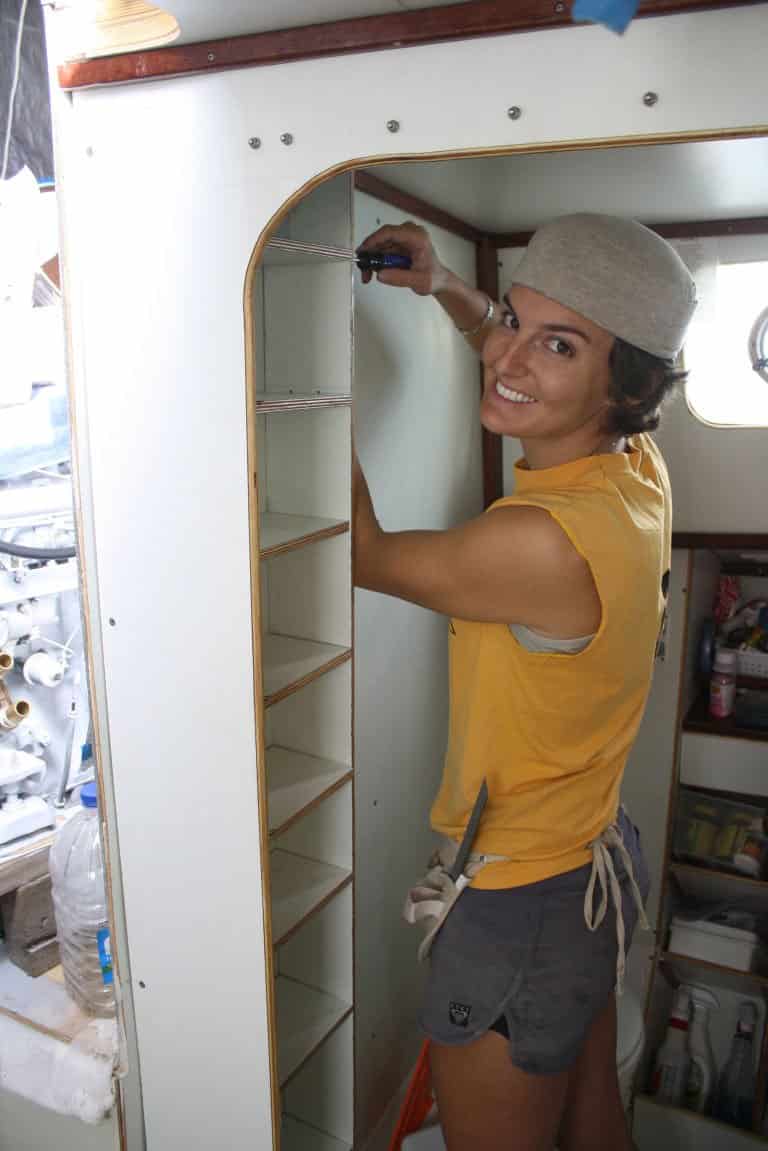 The once broken-down ship now has a remarkable hood ventilation system to eliminate excess heat and an improvised water maker that generates 40 gallons an hour for washing dishes. They’ve had a 260-pound Hobart dough mixer and a double-brick lined Bakers Pride electric oven installed in the boat as well. Sasha also placed a hanging basket scale to offset the waves. For electricity, he mounted solar panels on the boat to power the appliances except for the oven, which is powered by a diesel generator. 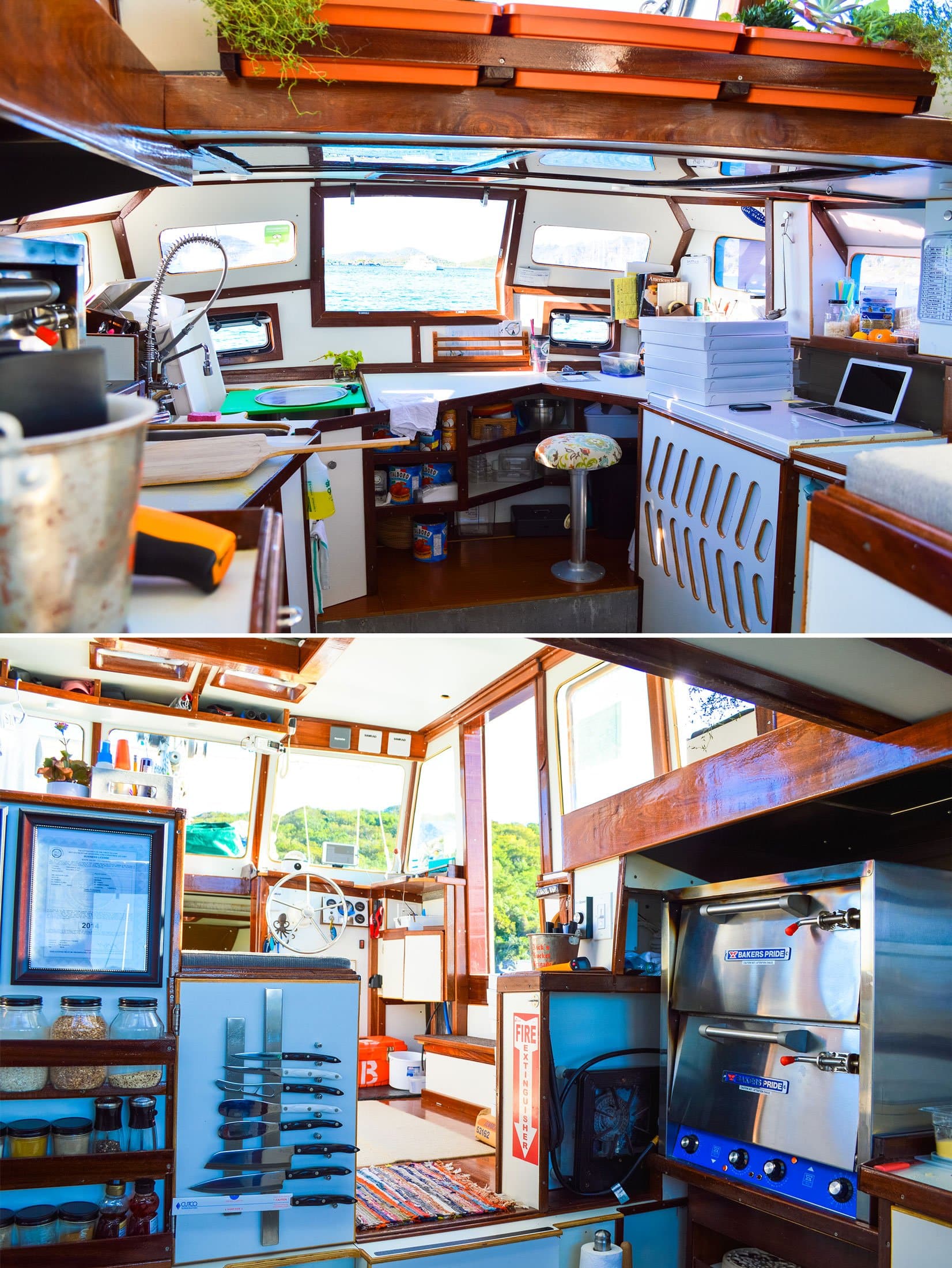 Every tool and equipment in the kitchen are strapped down to prevent them from moving.

“When cooking on boats, you have to be really careful about where you set things,” Tara said. “The last thing you want is to have a really big wave and have a knife go flying.”

When they were finally able to finish the project, they called it Pizza π to reflect Sasha’s New York roots—where pizzas are often called pies, and his love for math. 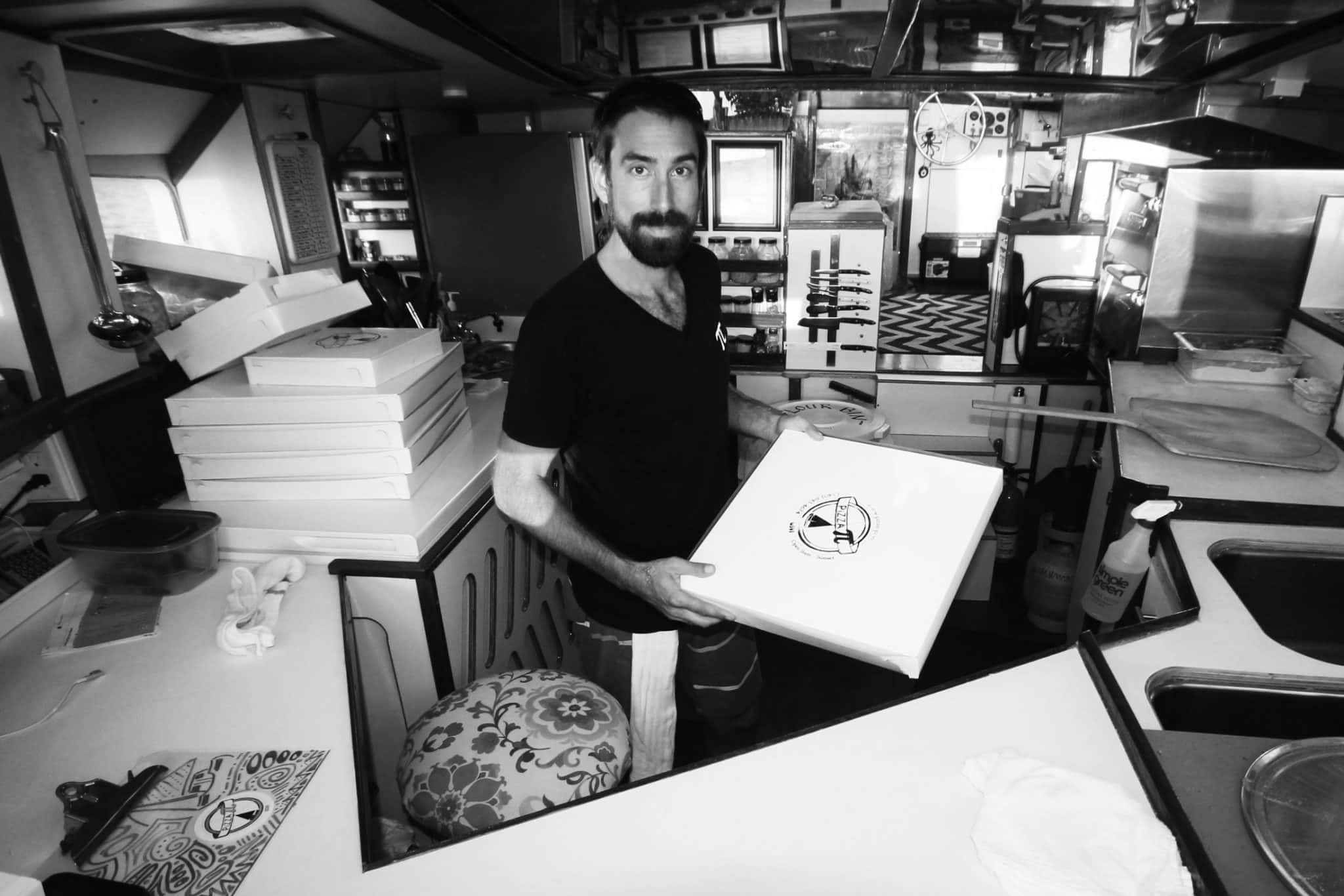 “Pi is a really special number,” he said. “I like that it’s irrational and transcendental and never repeats. It has infinite possibilities.”

The boat was finally ready, but they still need to learn to make pizza. And since Sasha was particular about making New York-style pizzas, the couple enrolled in a week-long course at Goodfellas, a cooking school on Staten Island. There, the couple learned how to bake the iconic New York thin, crispy crust. 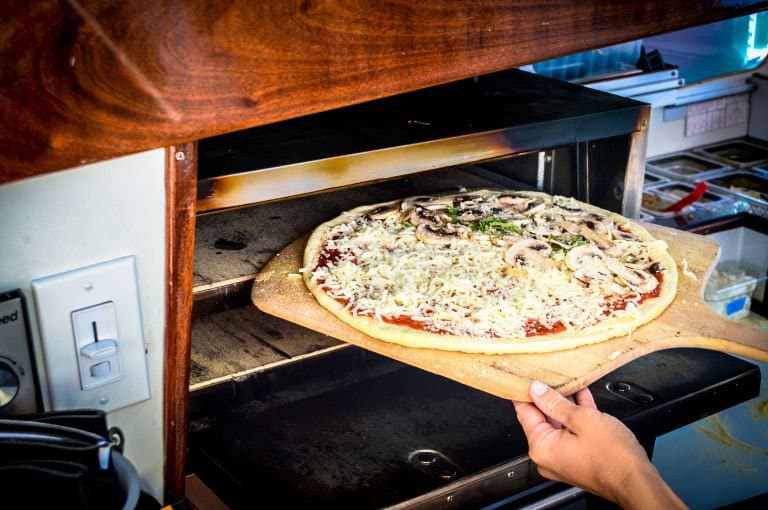 “Sasha is a bit of a pizza snob, being from Manhattan,” Tara said. 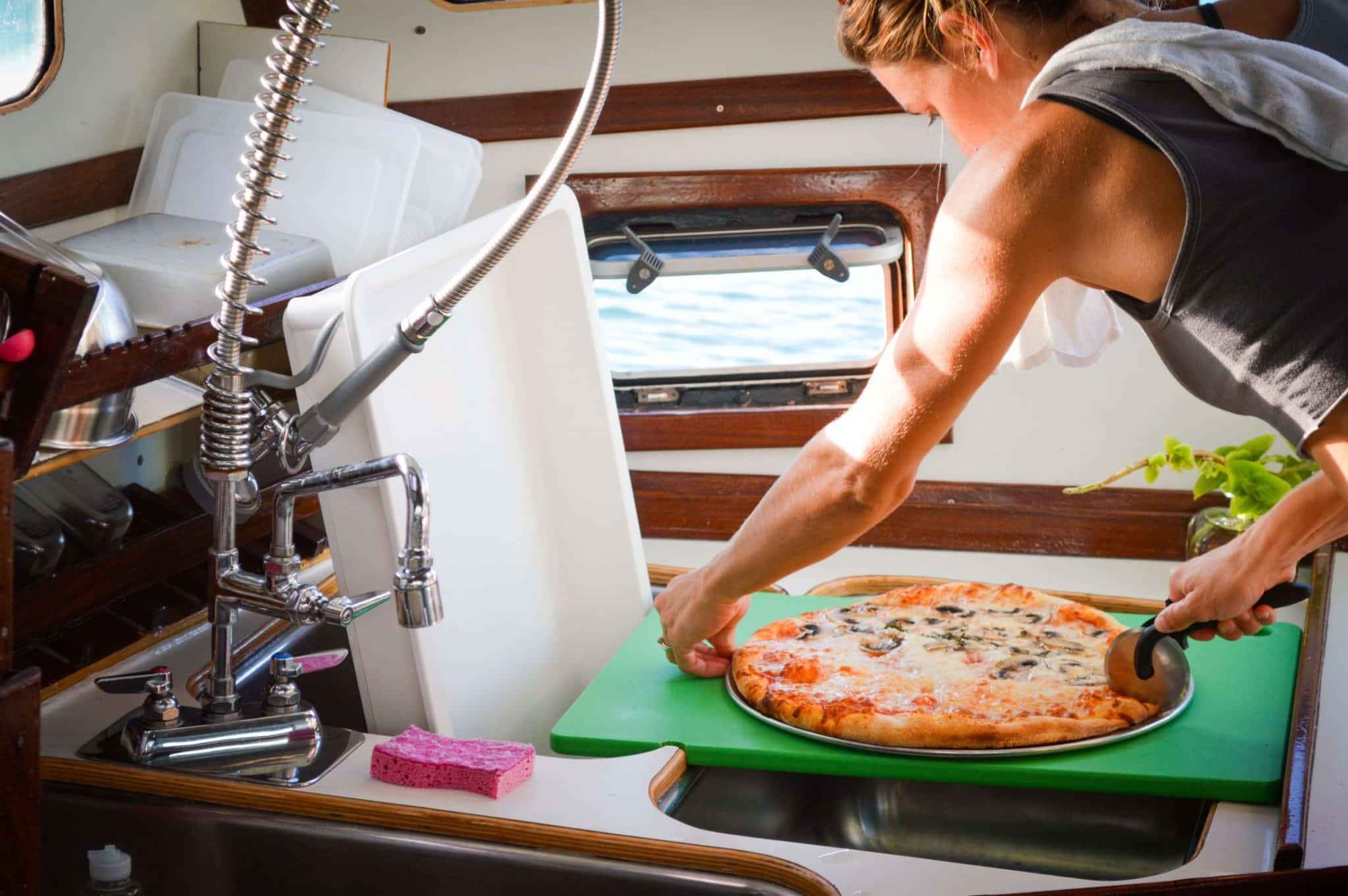 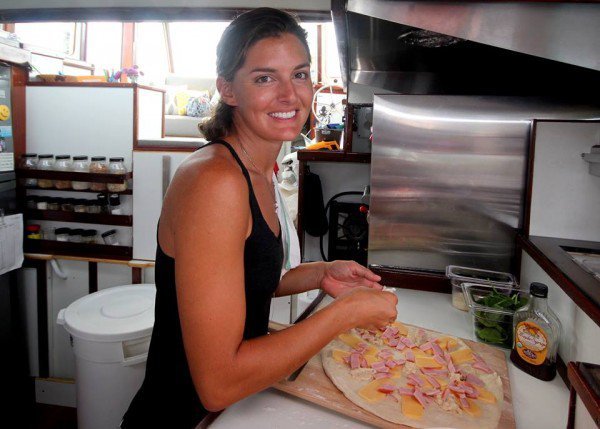 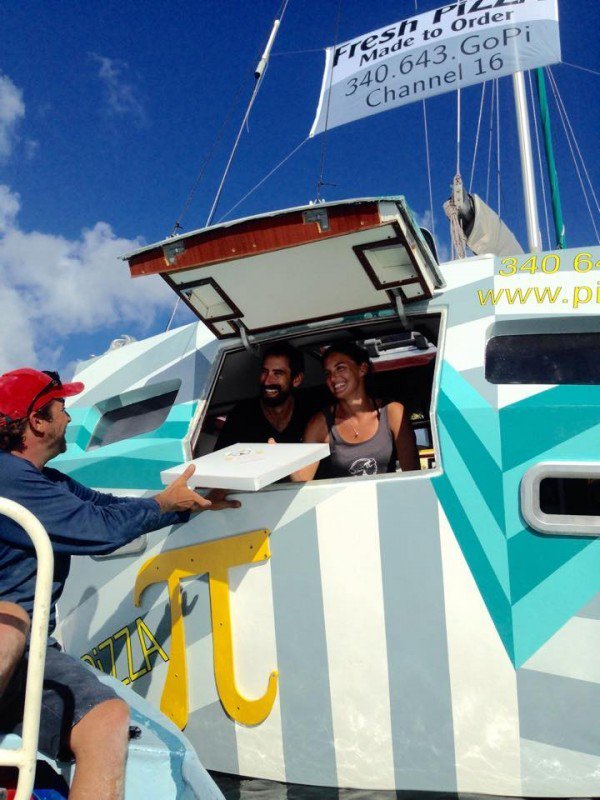 Customers may either use their boat’s hand radio or call from their cellphones to order. They can also send their orders through email. The couple can deliver the pizza anywhere within Christmas Cove or the clients can pick them up themselves. 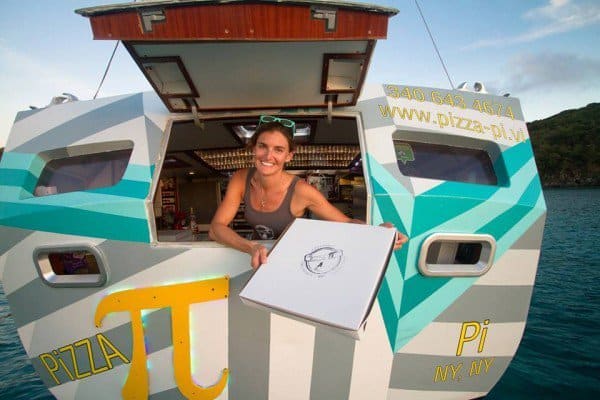 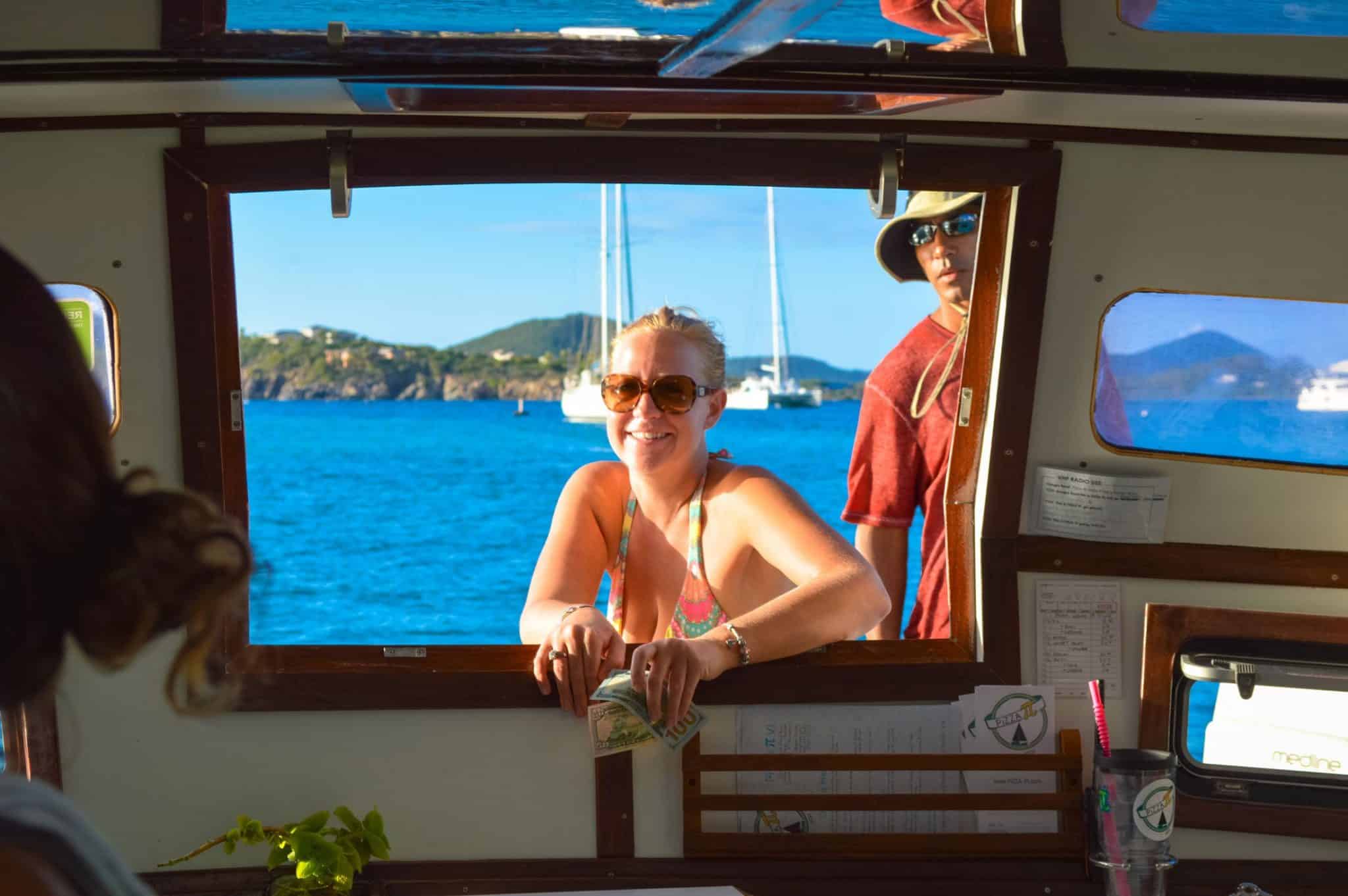 The pizza boat is open from 11 am to 6 pm. They operate from mid-November to the end of July, and then they take three months off during hurricane season. 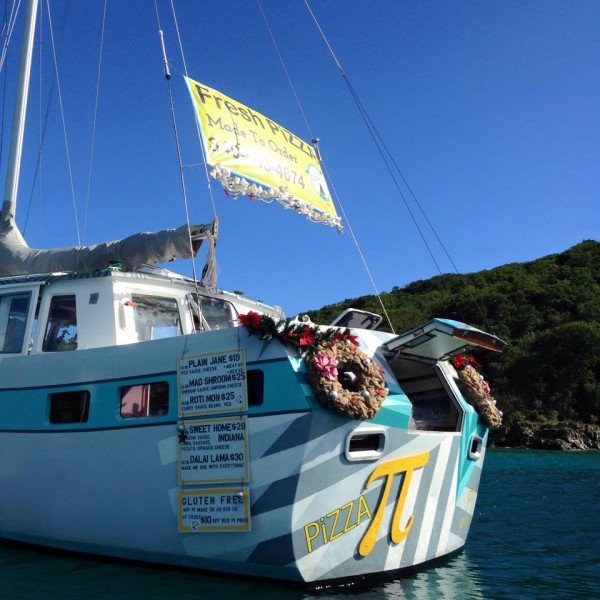 “Who would want to have pizza in the middle of the ocean?”’ you might ask. Apparently, many, because this lovely couple’s business is thriving. On average, they make 25 pizzas daily. And they do make more on a busy day. 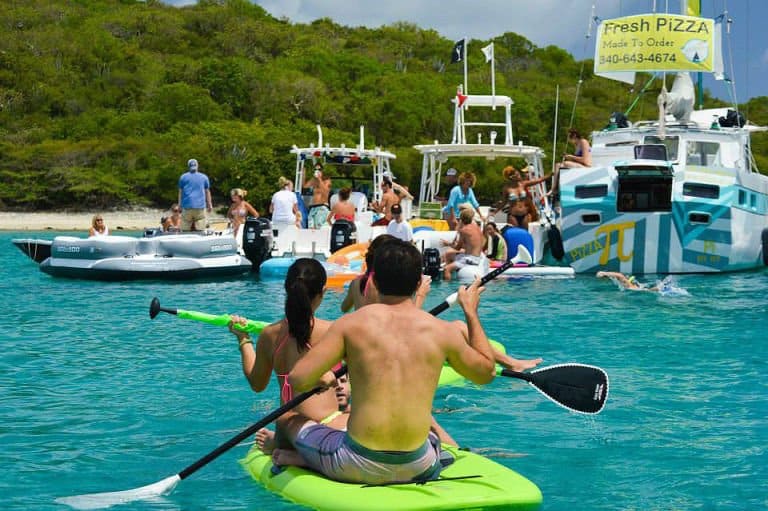 Pizza π ranked as the best restaurant in St. Thomas on TripAdvisor, with 59 5-star-ratings and one 4-star rating. In fact, the only reason why it lost one star is because ‘Pizza π’ wouldn’t deliver to the reviewer’s house, Bloomberg Business reports. 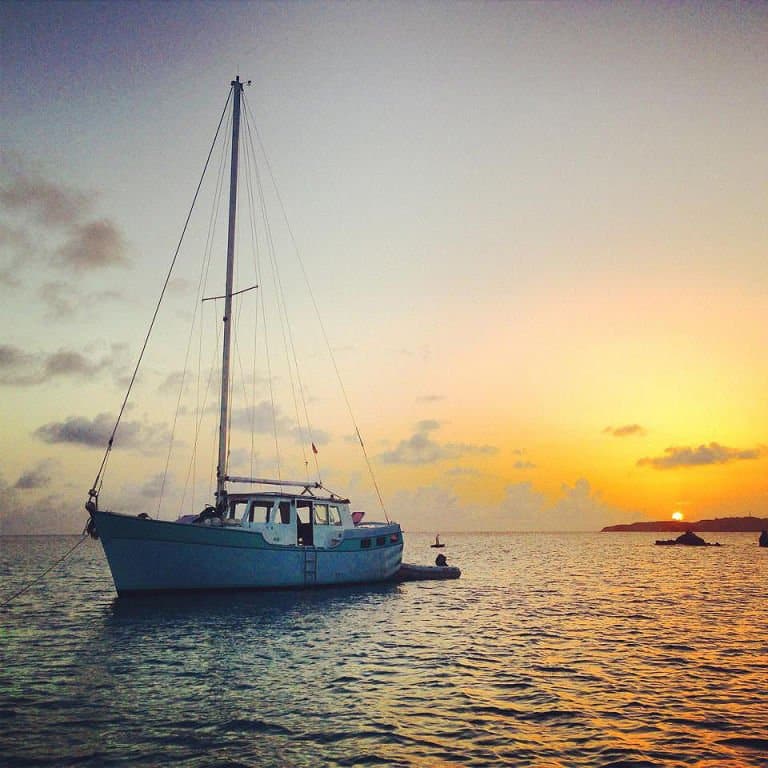 And the best part of it all is that Sasha and Tara get to fully enjoy the water. They can also just laze around on the boat and watch the sunset when the day is done.