Cat lovers, pay attention! If you’ve ever wanted to make your adorably harmless cat make look a little more of a bad ass, then here’s your chance.

Savagepunk Studio, makers of “unique and finely crafted cosplay, leathercraft, and accessories” has been offering these amazing cat body armor products over at Etsy.

The company is owned by Andy Fyfe, 38, with his wife Barbara, 31. Together, they work with some input from Owen, Andy’s son from a previous marriage, who is around 7 years old now. Plus there’s Jenga, their very own armor cat “in training” who is a “mixed-breed Savannah cat.”

Crafted by Savagepunk Studio, this body armor will give your pet the advantage during cat fights. 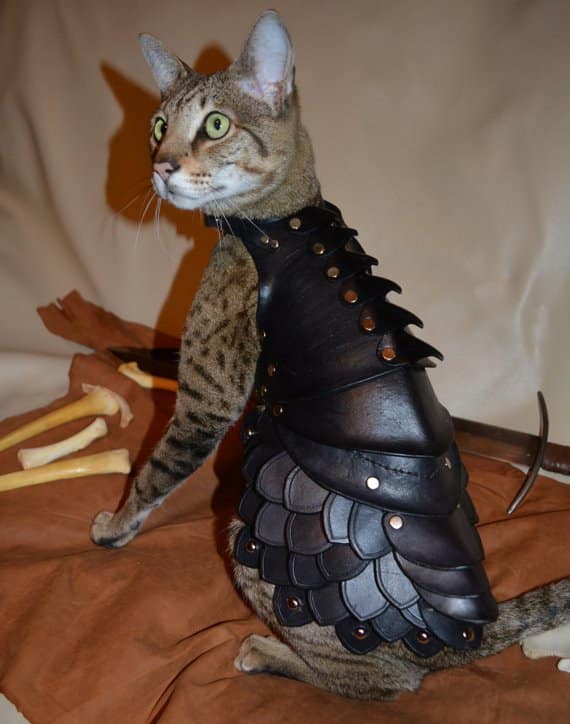 In an interview with BuzzFeed, Andy shared:

“The studio is based out of our home in the Boston, Massachusetts, area. We make all manner of masks, hats, costume pieces, and assorted oddities, with a specialization in custom artsy leather armor for humans and felines alike.”

Andy Fyfe got inspired by sculptural pieces. He then made something that cats can actually wear. 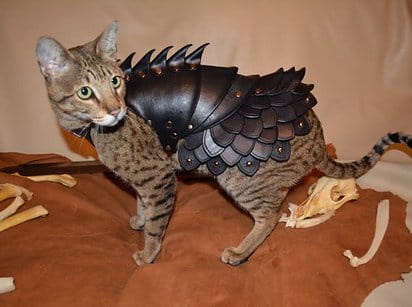 As for the cat armors, Andy said they took inspiration from the work of Jeff de Boer, a Calgary-based artist who has made “a series of magnificent historically based cat armors.”

Andy admits that Jeff’s skills are far more superior than his but adds that “his pieces were designed more as sculptural standalone works, rather than something one could actually try to stuff a cat into.”

After gaining massive attention online, Andy and his company decided to create and sell more of these cat armor. 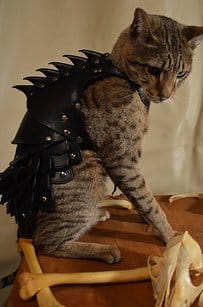 Initially, the company didn’t plan on selling the armor.

“It was just a bit of fun working with an unusually cooperative cat, and I posted some pictures on social media to share with friends. The pictures went viral almost instantly, to our total shock, and people started to track me down to ask how they could get cat armor of their own – I had to scramble to assemble additional sets a few weeks after the initial unveiling.”

The company sells the product online over at their Etsy page. 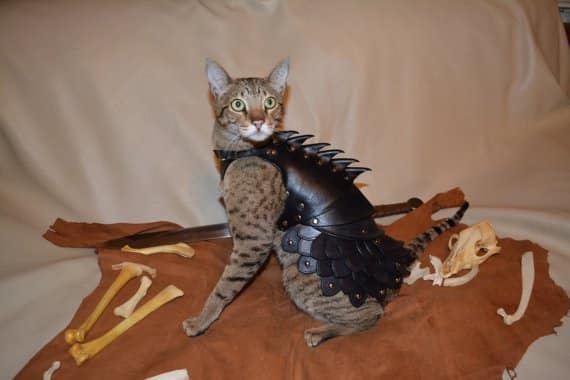 In case you’re interested to grab one for your pet, go head over to Savagepunk Studio’s Etsy page.