Somewhere in the town of Newbury in New Hampshire sits a slab of rock on the side of Route 103. Thousands of motorists pass by the route each year. Those who don’t know the story behind this rock would be wondering what the mysterious message on its surface means.

You see, this huge rock, which locals refer to as the “Chicken Farmer Rock,” brings a mysterious romantic tale of a possibly unrequited love from a boy who loved a girl. No one knows the real story of the rock but over the years, it has become a favorite legend in New Hampshire.

Sometime in the 80’s, there stood a small white house just across from Route 103 where the Rule family lived. The Rules had a chicken farm in their backyard, with the smart and witty 16-year-old Gretchen Rule helping to raise chickens. According to legends, Gretchen had a secret love, or even two of them, but the tale that has been going around for years involved this particular boy who had a crush on her.

This rock has become a landmark for Route 103 along New Hampshire. 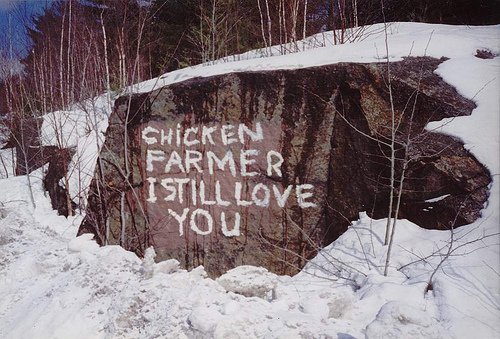 This boy was too shy to even confess his undying admiration for Gretchen so he thought of the best way to let his feelings out. One night, the boy wrote the message “CHICKEN FARMER, I LOVE YOU” with letters that measured 8 inches in height. This message was painted on the large rock near Gretchen’s house, just across the road.

Gretchen woke up the next morning to see the message on the rock and was said to have an idea who was behind it. Nobody really knows what happened after that. There were and are so many unanswered questions about this romantic gesture from the boy. Did Gretchen approach the boy or did they eventually hook up?

The story continued with Gretchen moving away to attend college, but still the message remained on the rock. Overtime, the paint faded and by now you’d think that it would be the end of a mysterious love story. You’re wrong.

The tale of the Chicken Farmer rock is a mysterious and romantic one. 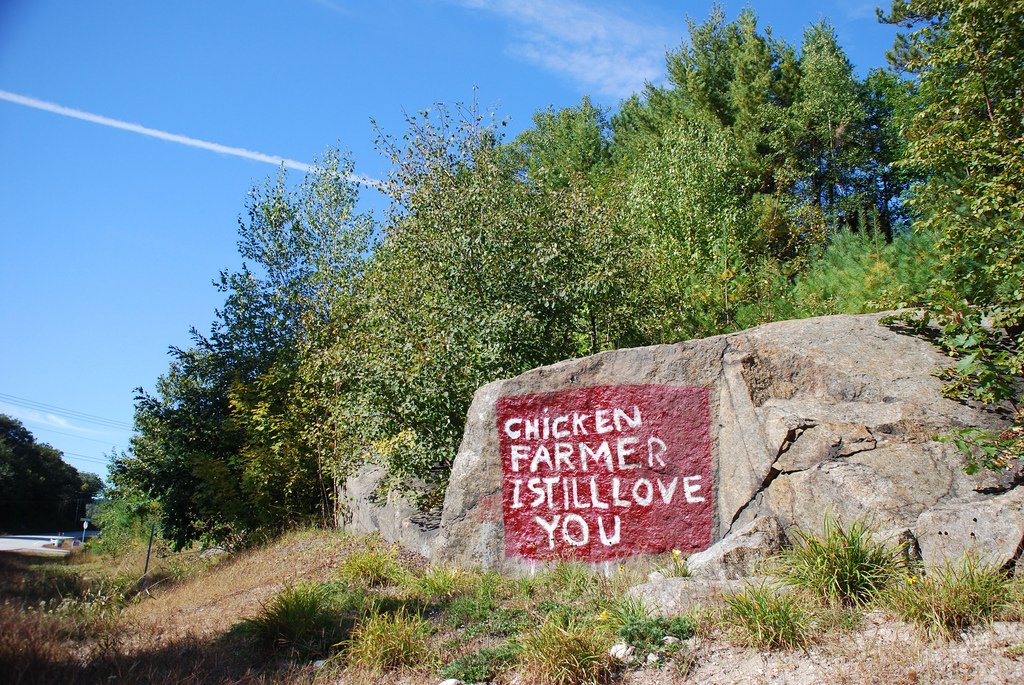 One day, sometime in the 2000s, the message on the rock was altered and a fresh paint can be observed to have taken over. “CHICKEN FARMER, I STILL LOVE YOU,” the new message reads. The rock has since become a landmark for the route. Every few years, someone would spend time applying new paint until in 2011, when there was a graffiti complaint and the Dept. of Transportation had to scrub the message away.

Not too long after, the “CHICKEN FARMER, I STILL LOVE YOU” message proved to be a stubborn one, since it appeared even bigger than ever. The DoT can no longer do something about it because Newbury residents have filed a petition to let the graffiti remain as is.

Tourists and locals can still see the message today on Route 103.