There’s something morbidly fascinating about death. People have always been curious about what happens after we die – do we get to pass through the pearly gates? Do we get reincarnated? Do we spend an eternity of nothingness? Despite never really knowing what happens, we are still all a little curious, to the point that even symbols of death are fascinating to us.

A chapel in the Czech Republic is the perfect place to ponder on life and death, with its decor composed primarily of human skeletons, a long-standing symbol of death.

The Sedlec Ossuary, also known as the Bone Church, was created in the 1200s when the abbot of Sedlec monastery brought back some holy soil from a pilgrimage to Jerusalem. It’s said that the abbot spread this soil across the Sedlec cemetery, which then became the new burial ground of Bohemia.

In the 1400s, upwards of 30,000 people have been buried in the cemetery. Many of these burials were caused by the plague of 1318 and the Hussite wars.

Later on, there had been too many bodies, so by the end of the 1400s, the bodies had to be dug up and moved to the chapel to create a pyramid. Those piles of bones stood there until they were transformed into the morbid decor they are today by an artisan in 1870.

The entrance to the Cemetery Church of All Saints, under which is the Sedlec Ossuary. 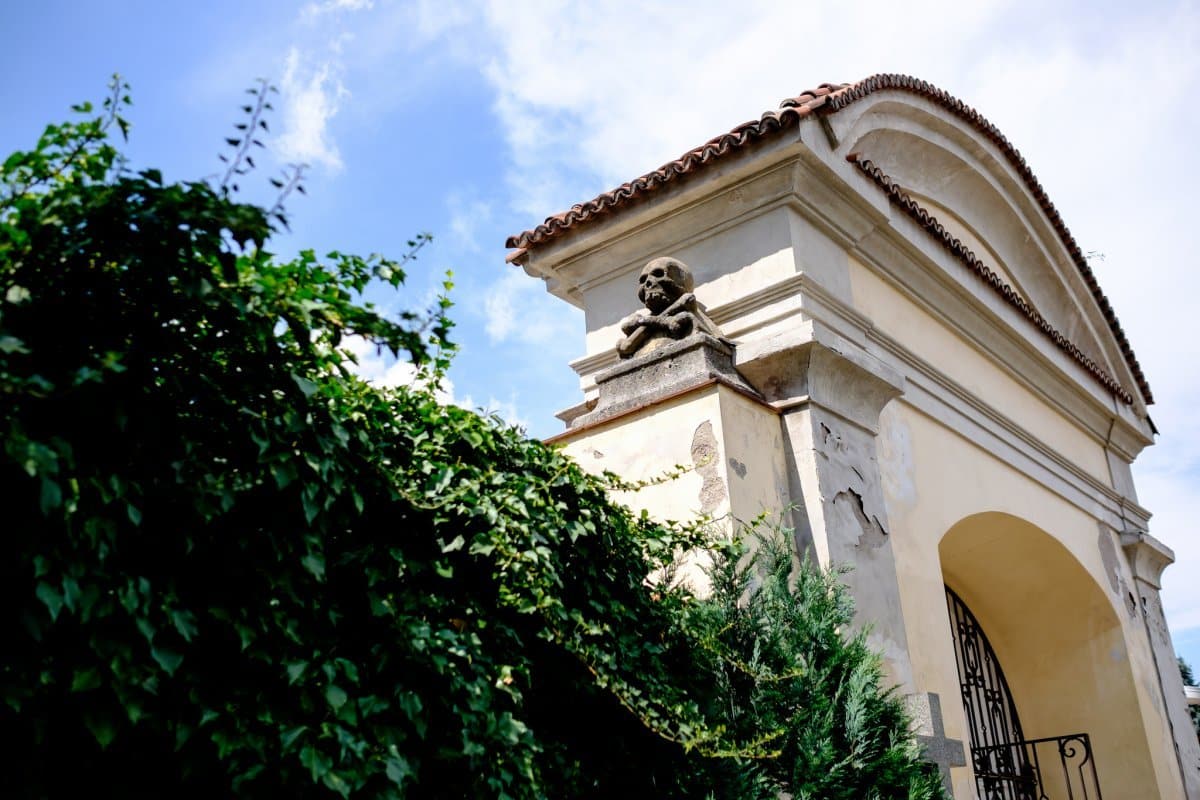 The Ossuary serves as a Catholic chapel. 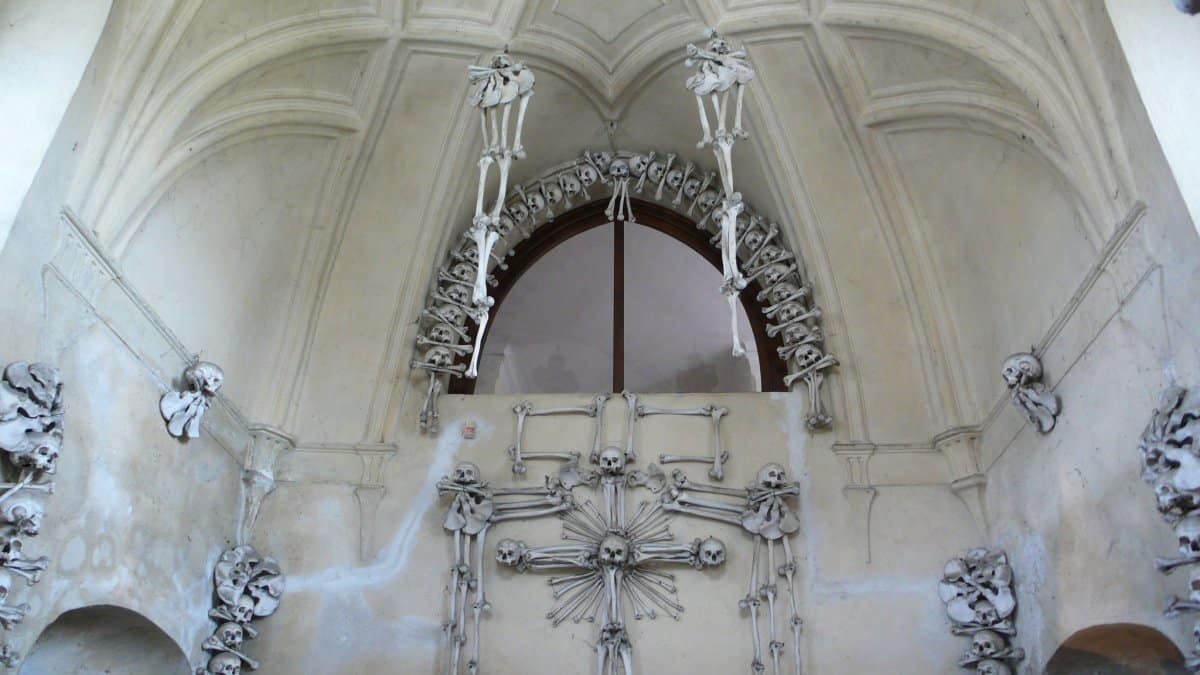 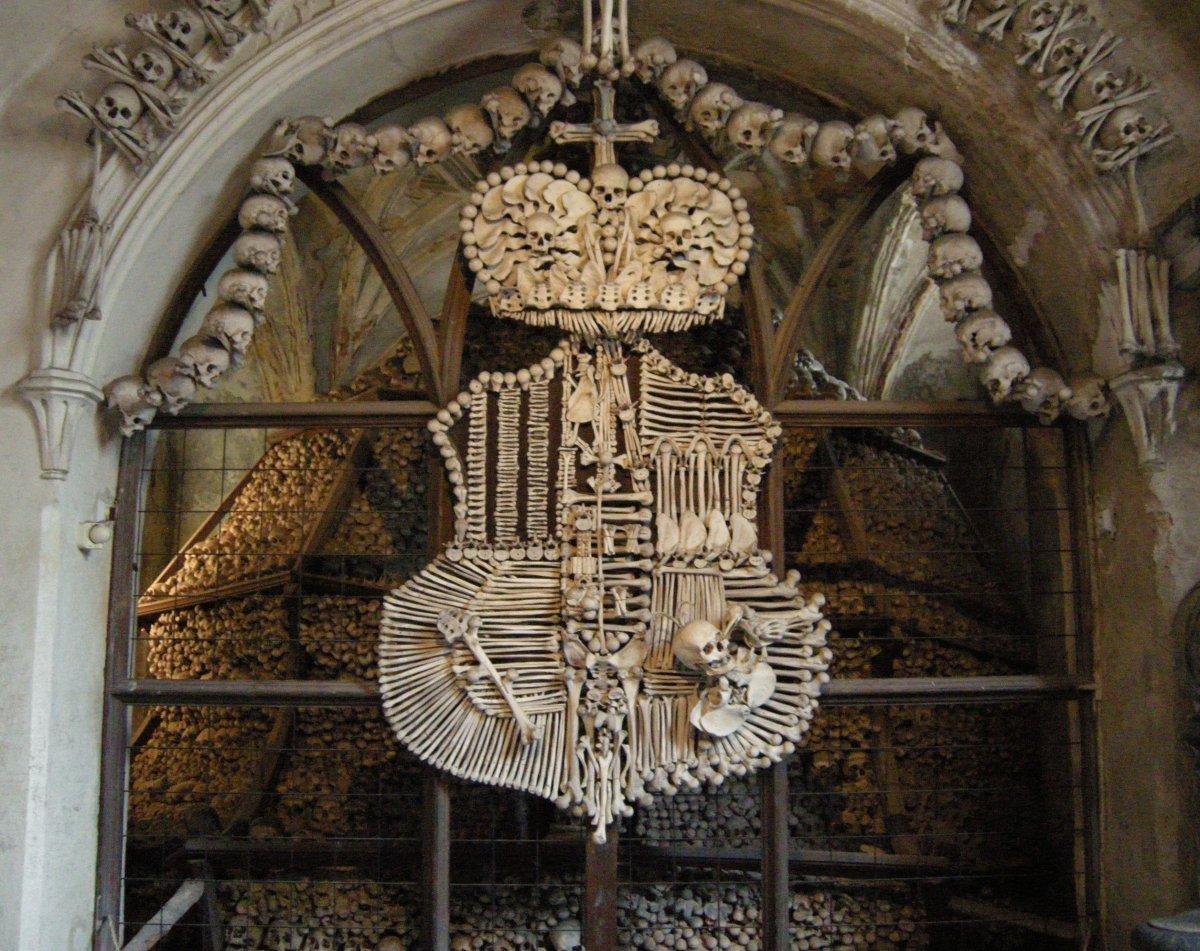 The mastermind behind this macabre decor even signed his name on the wall using bones. 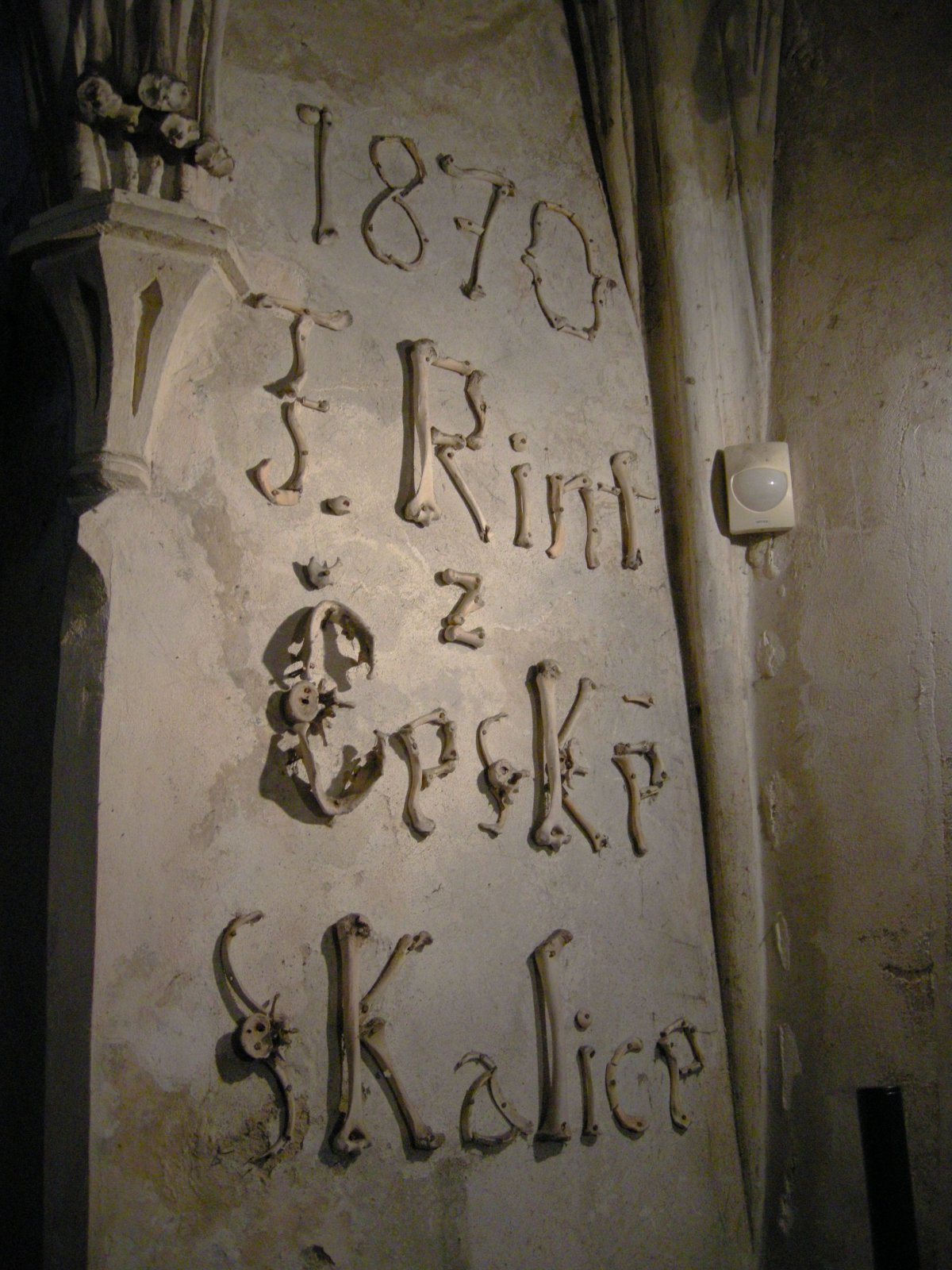 At every turn, you’ll find different ornaments made of bones. 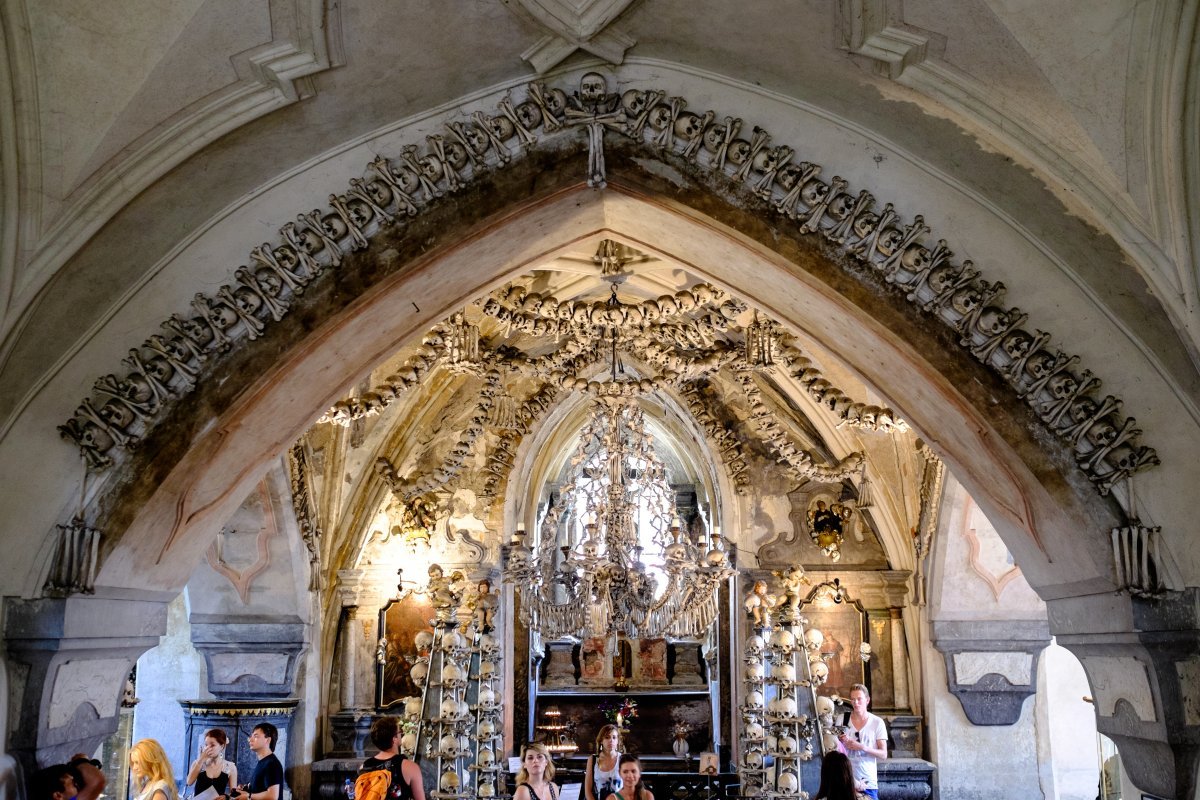 The bones are bleached and disinfected before they are turned into decor. 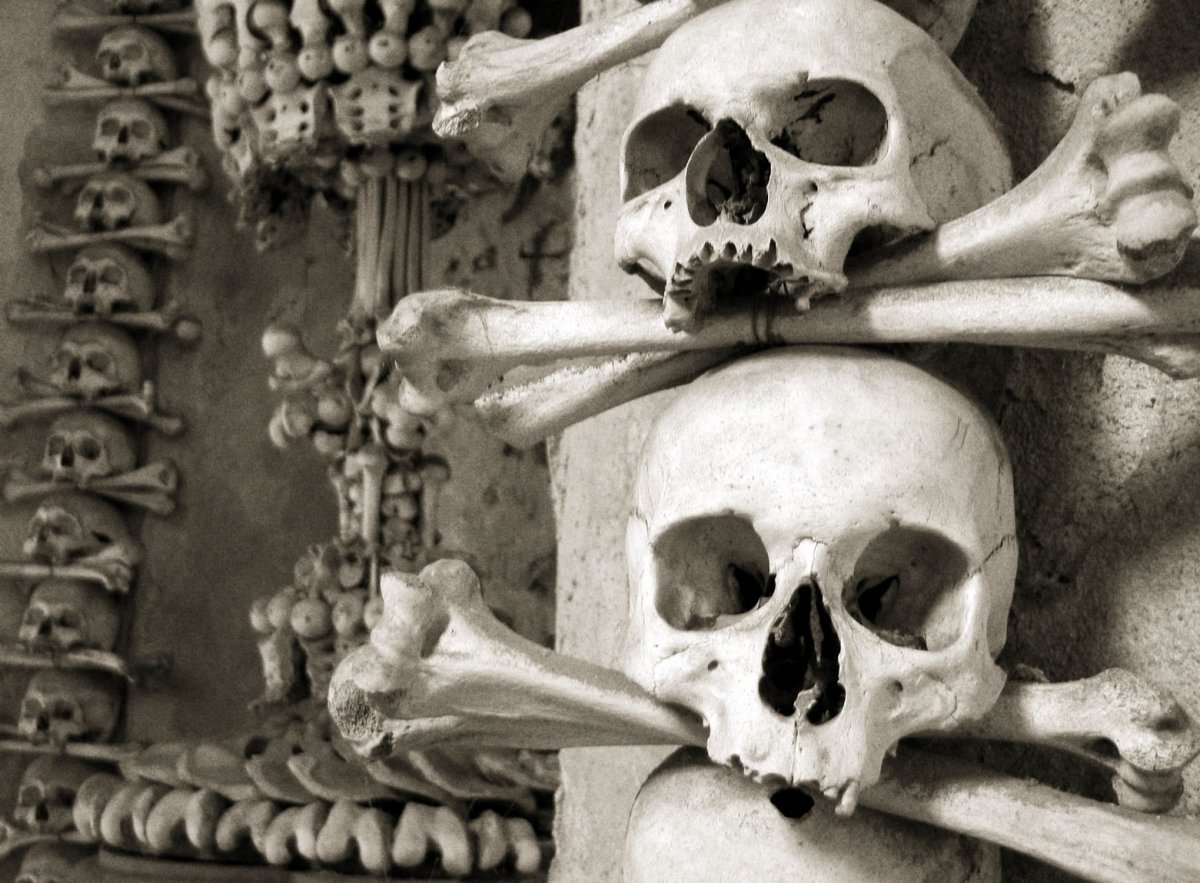 The grand chandelier is said to contain a copy of every bone in the human body. 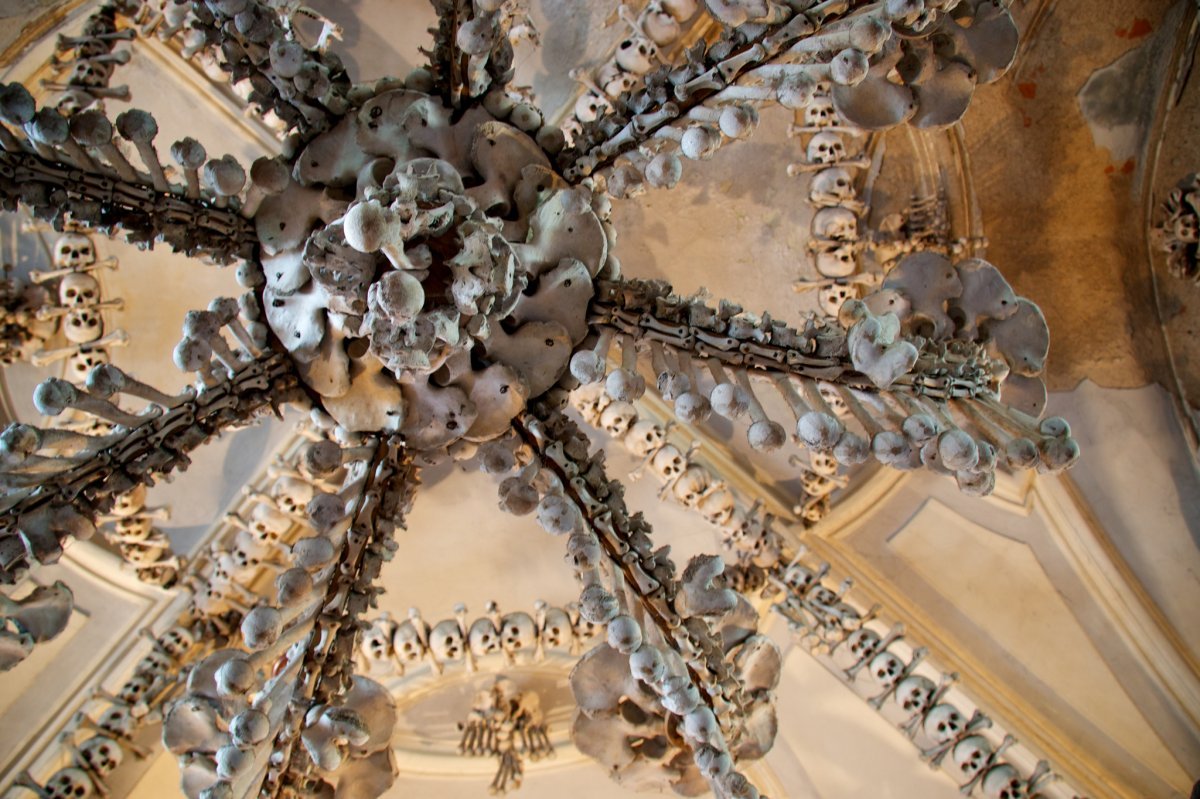 Some bones turn into embellishments… 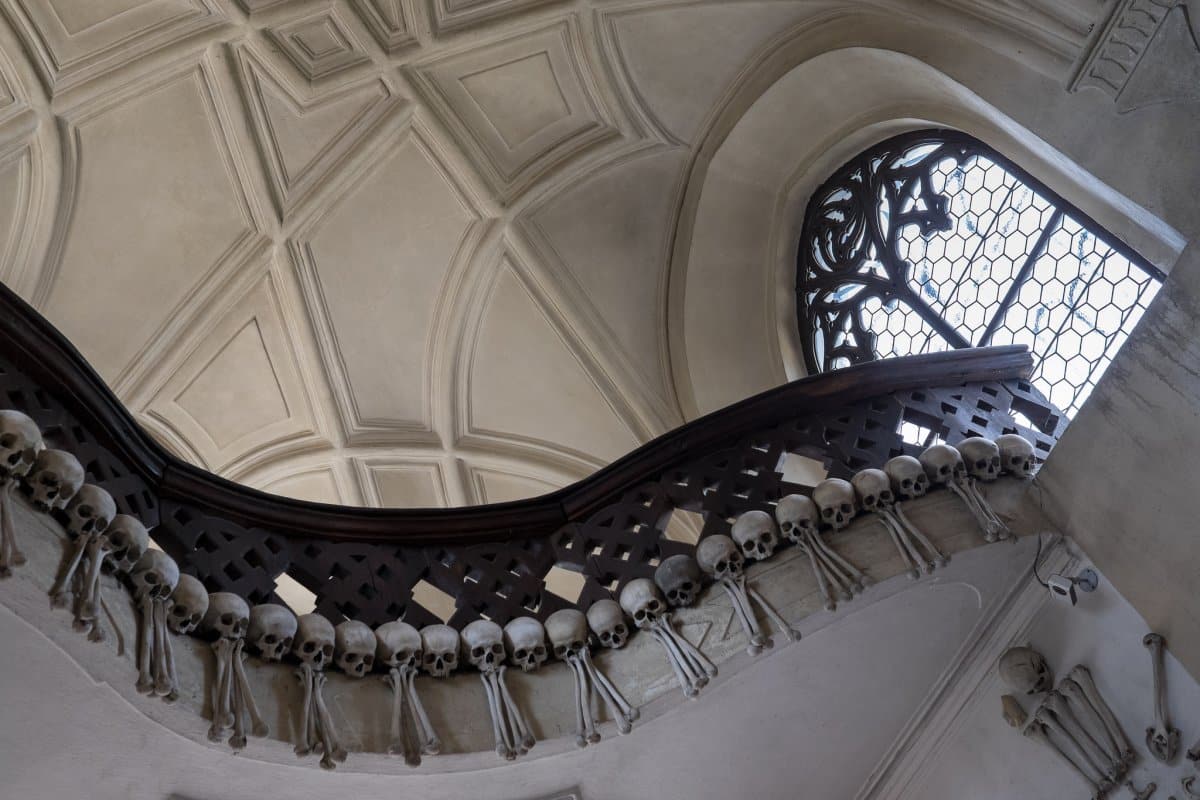 While others are formed into objects you would normally find inside a chapel. 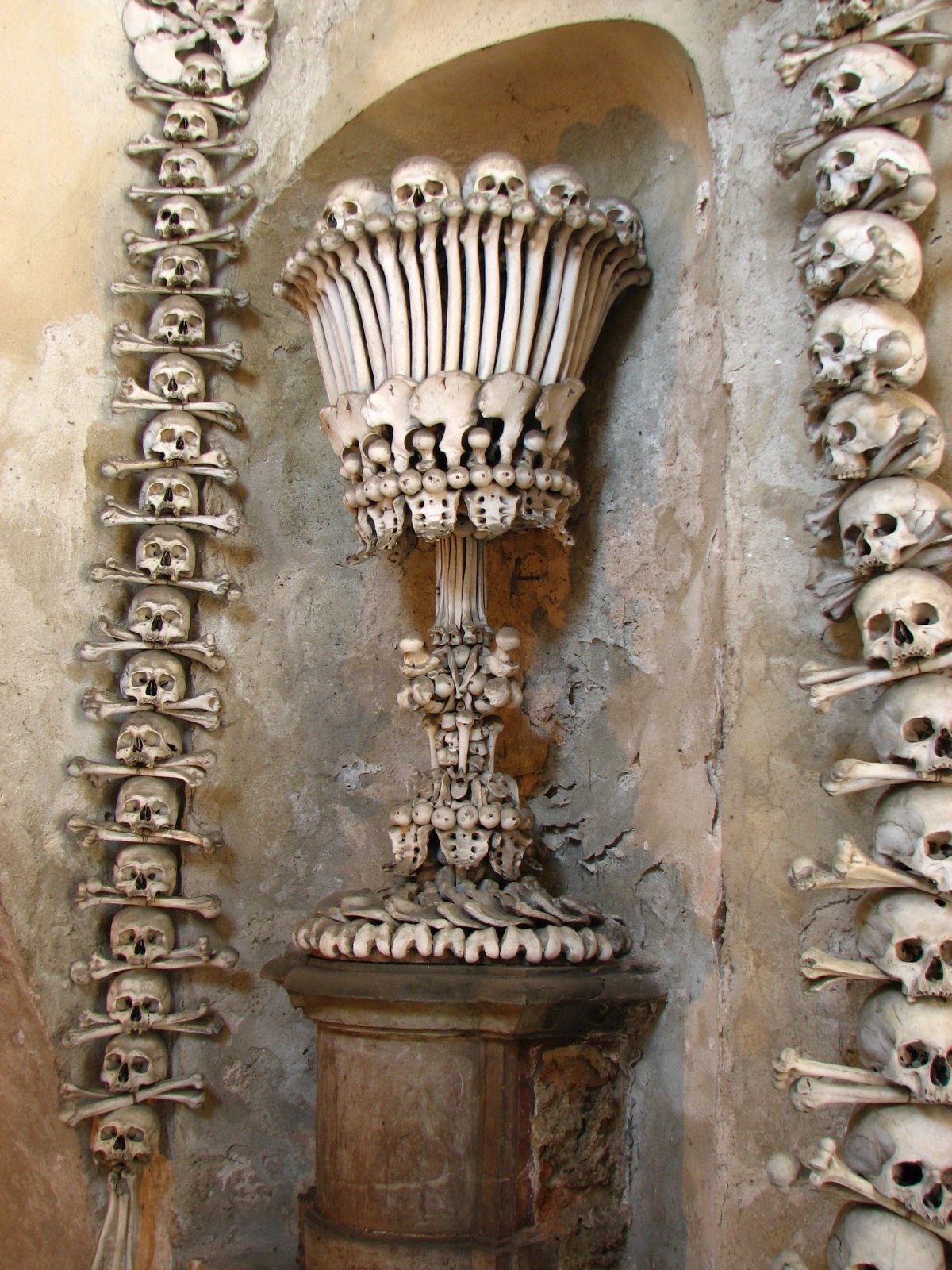 Some of the bones depict a story, such as this Turkish skull whose eyes are being poked out by a raven. At the time the bone ornaments were made, the Turskish were a great military enemy. 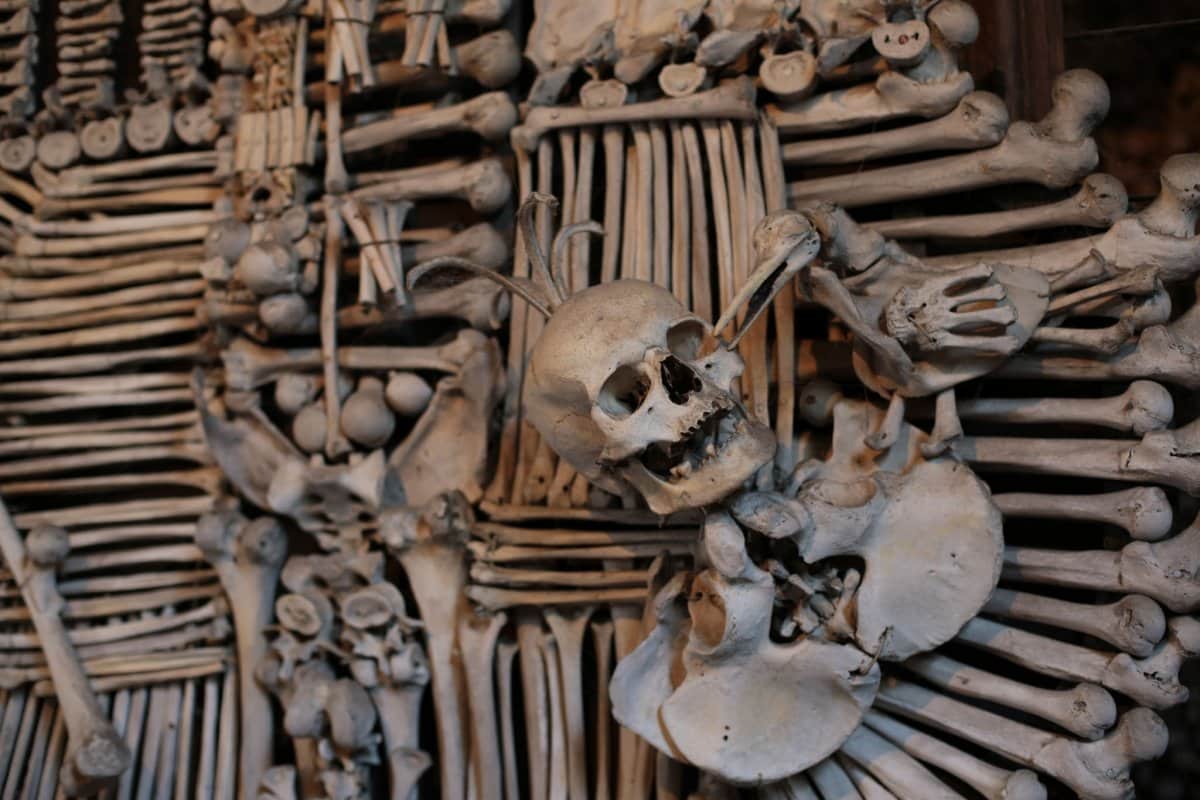 Although not all chapel decors are made of bones, the bones transform regular church ornaments into a more macabre scene. 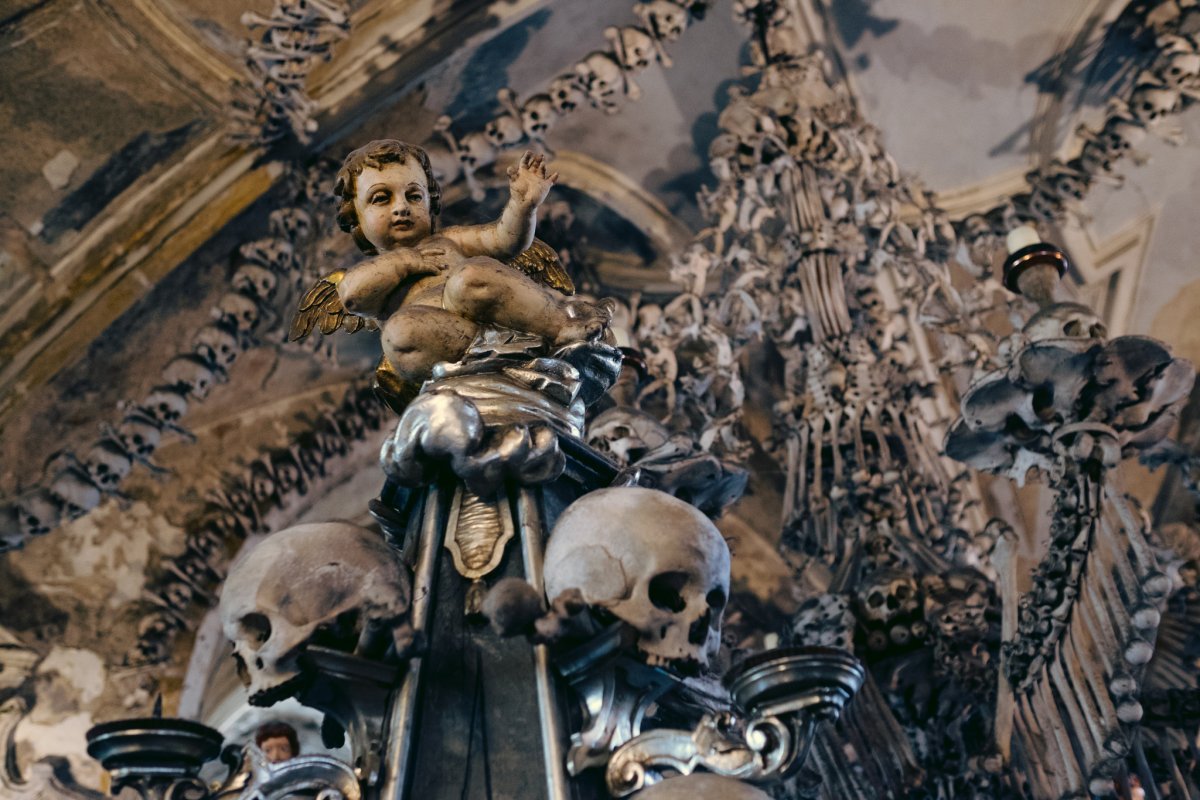 Every corner of the chapel has a huge mound of bones… 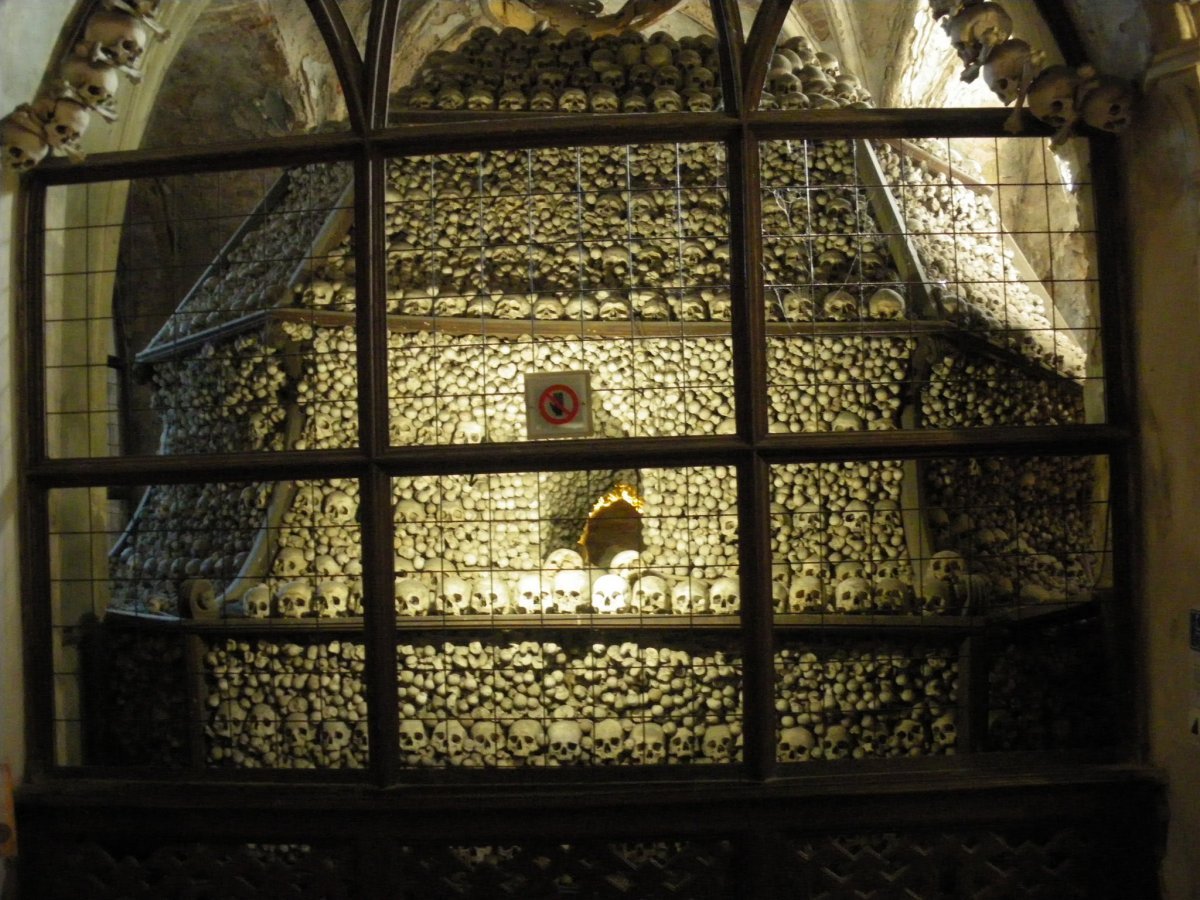 And they look undeniably spooky when you get up close. 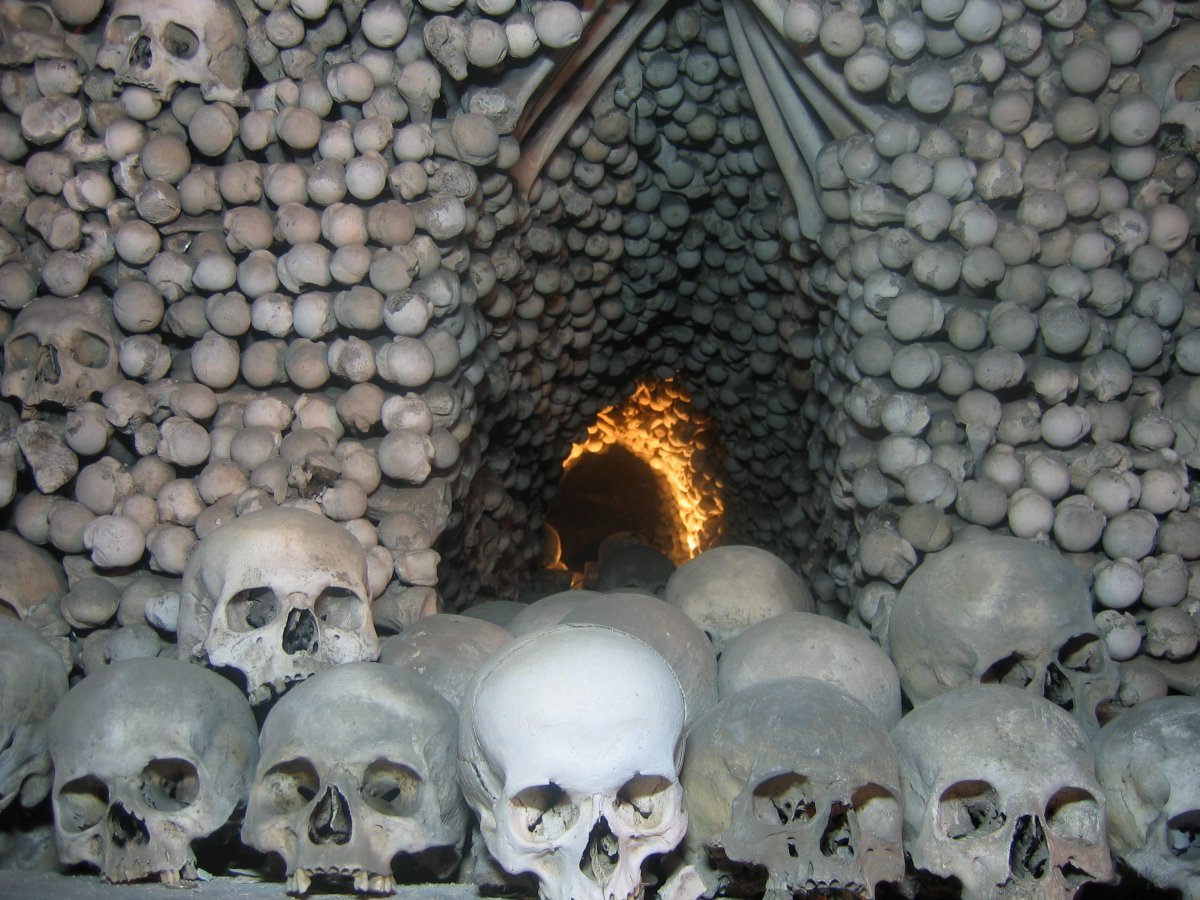 Some visitors to the chapel leave coins on the bones for good luck. 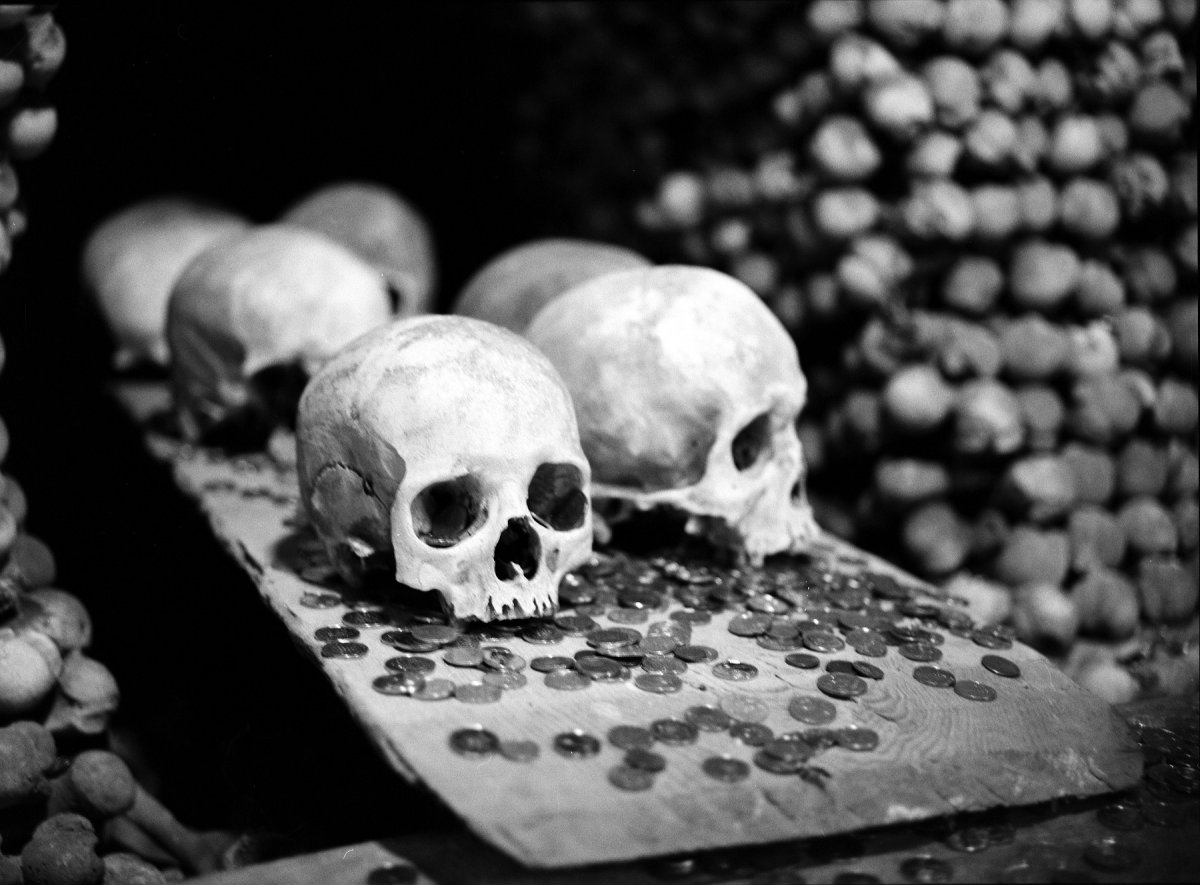 Today, the Sedlec Ossuary is said to contain the bones of up tp 70,000 people. Would you dare to visit it?