These days, owning a car is more of a necessity than a luxury. Having a vehicle allows you to move around from one destination to another with less hassle. Although riding buses, trains, or cabs can help you save big bucks, driving a car is still more convenient because it allows you to enjoy faster trips.

One of the downsides of automobile ownership though is that maintenance can be painfully costly. Got some engine trouble? Found a big scratch on your car door? Those can mean additional expenses on your end.

Well fortunately, it is possible to take care of a minor car dent without bringing your vehicle to a nearby repair center with this quick hack.

In the video below, you’ll see how to deal with a car dent by using boiling water. 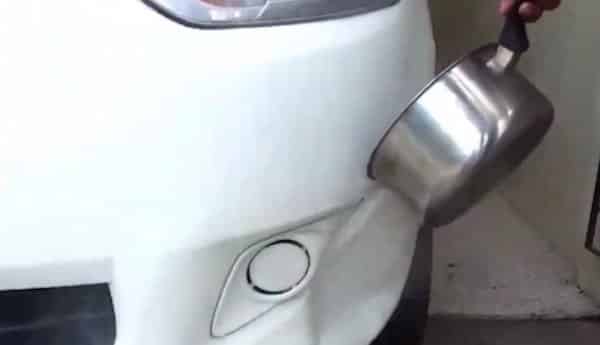 Yes, it is actually possible to fix a car dent on your own – with the use of a boiling water. This unbelievable trick is demonstrated to us by YouTuber Mike Oxlarge.

As you have just seen, Mike slowly poured the boiling water on the dented area of his car’s bumper. After doing that, he pushed interior part of the bumper and everything instantly looks good as new once again.

Quite a handy tip, huh? Go try this one on your car and do let us know how it went. Keep in mind, however, that this trick only works for smaller fenders so don’t attempt doing them on bigger ones.