It all happened at a Cracker Barrel Restaurant in Toledo. 8-year-old Myles Eckert came in with his family to eat, Myles was quite excited. He had just found a $20 bill in the parking lot. He began to think of ways he could spend the found money. “I kind of wanted to get a video game, but then I decided not to,” Myles says. But changed his mind very quick after seeing a soldier in uniform.

Lt. Col. Frank Dailey entered the restaurant on February 7th for lunch at about the same time as Myles.

In memory of his father

“Because he was a soldier, and soldiers remind me of my dad,” Myles explains. His father, Army Sgt. Andy Eckert, was killed in Iraq, only five weeks after Myles was born. All he had to remember of him are pictures and other people’s story. He basically only had his imagination to wonder what he was like. “I imagine him as a really nice person and somebody that would be really fun,” Myles says.

Here Is The Note He Wrote: 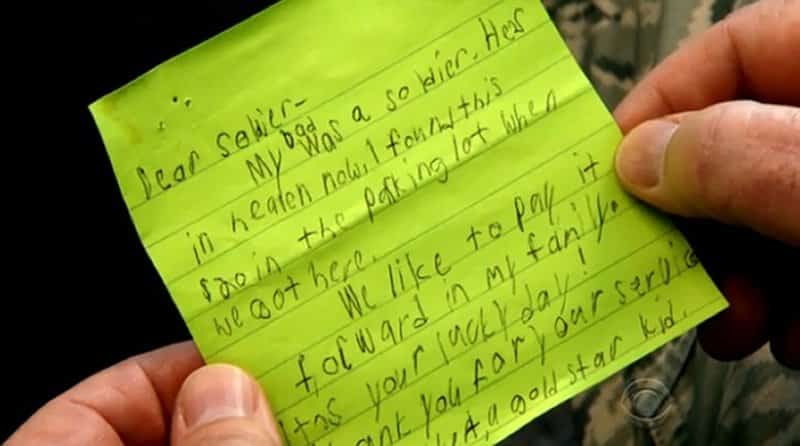 In Honor of his dad, Myles wrapped the $20 in a post-it note that said the following,

Dear Soldier,
My dad was a Soldier. He’s in Heaven now. I found this 20 dollars in the parking lot when we got here. We like to pay it forward in my family. It’s your lucky day! Thank you for your service.

They talked for a few minutes then went about their day. After the word got around town, the story began to hit local news. Then not too long after, it hit National attention. Lt. Col. Dailey says he’s already given away that $20 and plans to do much more. He also hopes that little green post-it note will inspire other people across the country to give.

Watch the video for yourself:

Would you do the same thing as this young child did?