It was a shocking ending to what would be a record-setting sale. A painting by the mysterious artist Banksy was auctioned off at Sotheby’s for $1.4 million. However, the artwork immediately began shredding itself as soon as the hammer fell.

The “Girl With Balloon” is one of the most popular Bansky artworks. A copy of the painting was acquired by Sotheby’s and auctioned off on October 5. However, the artist clearly had other plans for the art.

The painting ‘Girl With Balloon’ is secretly self-destructive. 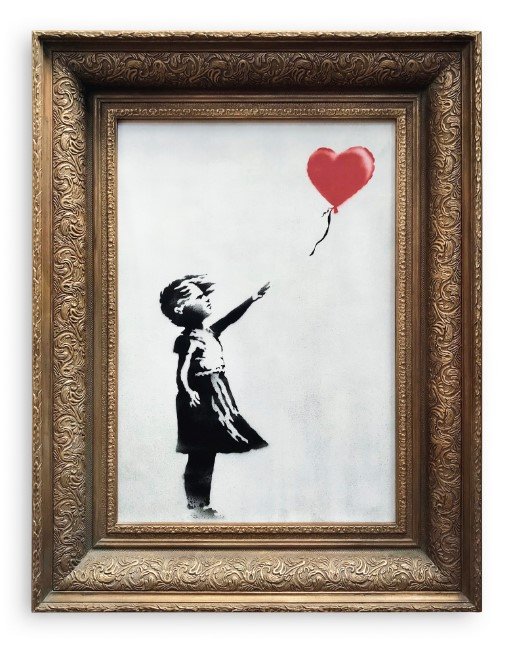 The spray paint on canvas was the last lot of the “Frieze Week” evening contemporary art sale. There was a huge competition between two telephone bidders over the painting. One of the bidders finally went for $1.4 million, prompting auctioneer Oliver Barker to set the hammer down. That’s when the most shocking thing happened.

An alarm reportedly went off in the room. People immediately turned to the painting, which had begun shredding itself. Fortunately, the machine in the frame stopped halfway and the painting was immediately taken away.

Banksy clearly planned for the painting to shred itself. The artist posted a photo taken during the auction with an interesting caption.

The artist also revealed on Instagram that he had rigged the frame with a shredder. Banksy wrote a Picasso quote, “The urge to destroy is also a creative urge.” He shared a behind-the-scenes look on how he incorporated the shredder into the art piece “in case it was ever put up for auction.”

Sotheby’s denied being “in on the ruse.” However, Alex Branczik, head of contemporary art in Europe for Sotheby’s admitted that “We’ve been Banksy-ed.”

“I’ll be quite honest, we have not experienced this situation in the past, where a painting is spontaneously shredded upon achieving a record for the artist.”

Watch what happened when the Banksy painting was auctioned at Sotheby’s: