A shocking video has recently been making the rounds on social media showing adults holding a little child down as it gets a chest tattoo. According to reports, it is believed that the footage has been taken in Vietnam.

The said clip, which has been captioned “Baby gets some ink” has sparked different reactions among netizens with some saying its obviously child abuse while others are questioning its authenticity.

One person can be seen holding down the baby’s arms while the tattoo artist does his job. 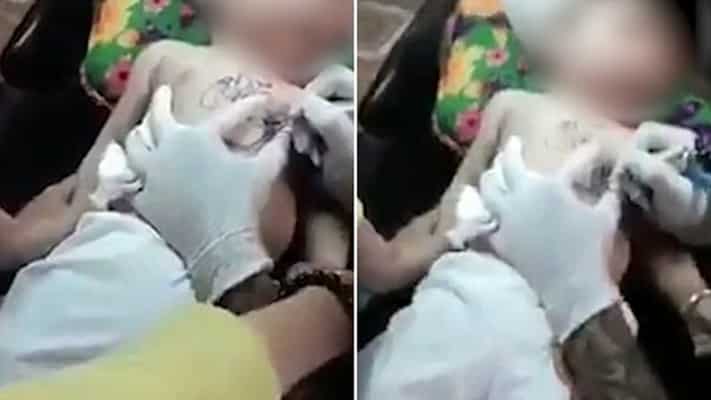 As it appears, the tattoo artist is drawing a cartoon character on the child’s chest.

“The only people who could do this are animals – they are luckily they didn’t give any details about their address.

“I hope the police are informed.”

Noticeably, the baby isn’t crying in the video. 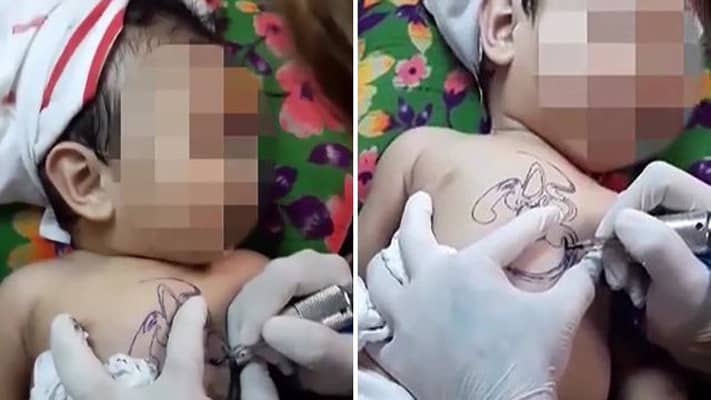 Although the youngster cannot be heard crying or screaming in pain, it can be seen wriggling and trying to escape.

This is the part where some observers are feeling suspicious about the entire thing.

One person pointed out:

“Grown men cry when they get a chest tattoo and this little child doesn’t react at all. Fake as hell.”

“There’s a chance this is fake unless the baby is sedated. It’s just a stencil. If this was real, the baby would be crying.”

A Unilad report tells us that Vietnam is “in the midst of an attitude change towards tattoos”.

Although older generations despise skin art as taboo, a significant number of young people are now openly embracing it. Tattoo studios are growing by the numbers and speculations say there may already be around 800 of them in northern Vietnam.

As of present time, there are very little regulations regarding the tattoo industry. No minimum age of consent is implemented and practitioners aren’t even required to carry licenses.