Henry Wadsworth Longfellow said, “Music is the universal language of mankind.” But sometimes, it seems that even animals understand the message that a song conveys.

We’ve seen a handful of amazingly cute videos that feature dogs that sing along with their humans. There are also those who appear to know how to play a musical instrument. That gives us an idea that, somehow, some pets love music as much as we do—just like these tiny cats.

In the video, you’ll see and hear a Malaysian busker as he plays an upbeat song. 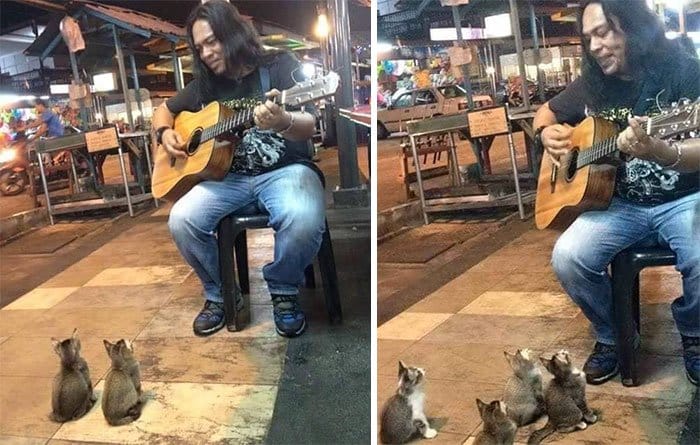 The audience was scarce, and the musician was just about to call it a day. But as he started to sing for fun, the most unexpected group of spectators showed up—four adorable kittens! The young cats sat in front of him, and they seemed to enjoy listening to his music.

The person who uploaded the video wrote:

“Suddenly, the kittens (3 months old) came and sat in front of him, he continued, it’s like [they] knew his feeling and gave him support.

“The kittens be his audience till the end, and he thanked the kittens for watching his performance.”

At one point, the kitty cats started to bob their tiny heads along with the beat!