There are 292 million possible combinations to win the Powerball jackpot of $1.58 Billion.

The prize was amounting to $40 million last November 4 and has climbed to $1.5Billion.

It was reported that whoever wins the top prize will have 2 choices, either the winner will be paid $4 million monthly for the next 29 years or will get a solid $930 million thanks to the 0% tax on California lottery winnings.

The said mind blowing jackpot prize forced quite a lot of people to go to another state just to buy lottery tickets as the Powerball is not being sold in 6 states of the United States. Hawaii and Alaska are too far away that is why they don’t participate. The state of Utah, Alabama and Mississippi did not take part in the lottery game that counts them out of the states who sells Powerball tickets.

Nevada has a lot of casinos which drops the Powerball to be played in the state making a lot of people cross to California just to try their luck for the jackpot.

People in Hawaii and Alaska are calling their relatives to bet on their behalf. This shows that this extraordinary rare occasion is turning a lot of people off their seat.

Luckily, there are three people who finally won the $1.58 billion jackpot! They are from California, Florida and Tennessee. The Powerball jackpot numbers were 08,27,34,04,19.

The three winners will be sharing the grand prize $1.58Billion. Each of the winners will receive $310million lump sum, their winnings will also have a 39.6% federal tax that makes the total winnings $187,240,000 for each of them.

The first fortunate winner came from Chino Hills area of California, the ticket was bought from a 7-11 store in Chino Hills. A lot of people gathered outside the said convenient store to celebrate the winning.

Owner of 7 Eleven Received One Million From Lottery Organizers 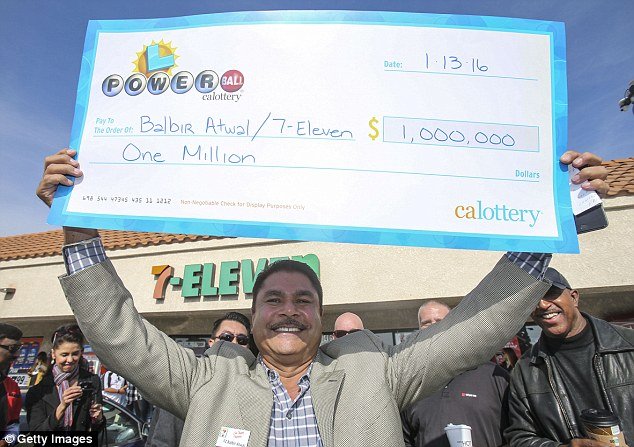 Balbir Atwal, owner of the 7 Eleven in California received a$1million check from the state lottery for being the store that sold one of the three Powerball winning tickets.

The second winner is from Munford, Tennessee. This winner bought the ticket at Neifeh’s grocery store. According to reports, there are only three stores in Munford that sell Powerball tickets. Munford is a small town with only 6,000 population.

Dana Naifeh, the store owner where the winning ticket was purchased received a $25,000 check from the lottery organizers. According to her, she will be giving her employees a share from the price she got for being the store that sold the lucky ticket.

Grocery store owner given a check 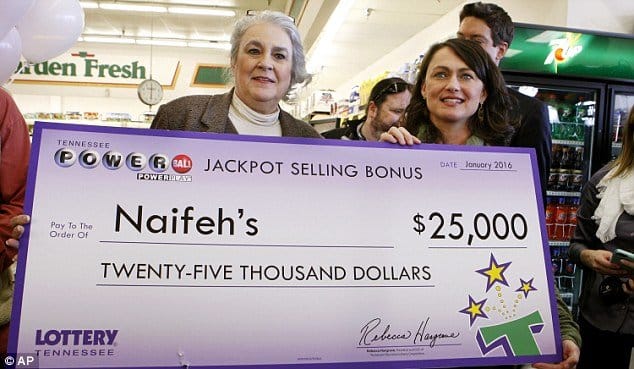 “It will mostly be a blessing for the winner, but it could be a very tiny curse because their lives will never be the same.’
But I feel it is a great thing and the winner is from here in Munford. Most of my lottery customers are regulars and I don’t get that much trade passing through.”

The third winner is from Forida. The ticket was purchased at Publix grocery store. The identity of the winner has not yet been revealed.

On the other side of the news, several people has gone to social media claimed that they won the lottery posting their picture with the photo shopped winning lottery ticket.

Some people were joking and claiming they won the lottery 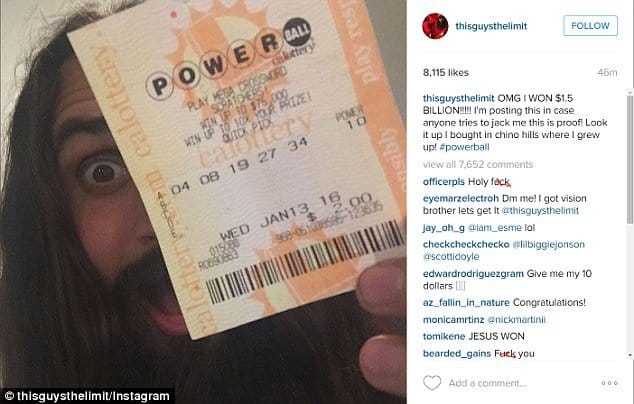 For more detailed information about the winnings watch the video below.

When will this happen again? To become rich you may work hard and make your way to the top or you can just bet on your luck. The only way to win in this lottery is to play it.

Don’t forget to SHARE this good news to your friends!