Most of today’s young singers started out by showing off their skills in school. Not surprisingly, a talented young boy decided to show off his singing prowess at a talent show in school. His cover of the Ed Sheeran song “Thinking Out Loud” immediately had the whole school cheering for him.

A school talent show can be a nerve-wracking experience for most children. Although 15-year-old Payton Kemp initially appeared nervous as his name was announced, the young boy carefully placed his sheet music on a small piano. When he began to play the Ed Sheeran song, the entire school couldn’t help but applaud for his performance.

This young boy will astound you with his cover of the Ed Sheeran track, ‘Thinking Out Loud’.

It’s an amazing performance that had the crowd going wild. However, this isn’t the first time that the young Kemp has enthralled an audience.

Kemp may be young but he’s been performing since he was a little boy. His grandmother claims that the child was already showing off his vocal prowess at the tender age of three.

Kemp’s family is understandably supportive of the up-and-coming musician. They encouraged the young boy to pursue his talents, allowing him to perform on stage at the age of nine.

He may be young but Kemp is a seasoned musical performer. 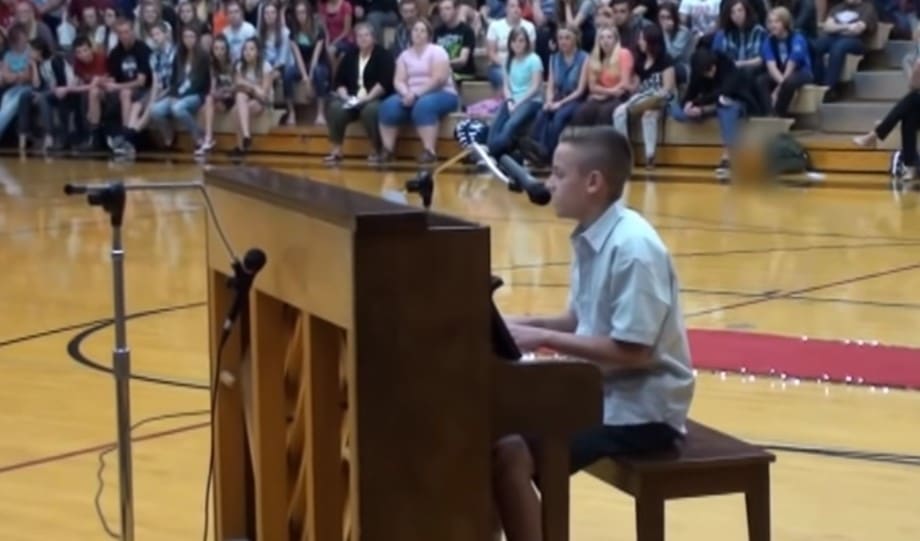 The young Kemp is certainly well on his way to conquering the world with his amazing voice. Now 18, the boy has pursued a career as a young performer and has even acted in a few minor projects.

He recently covered the song “Never Enough” performed by Loren Allred in the film The Greatest Showman. Some of his fans believe that Kemp’s voice has only gotten better with age.

Although there is little doubt that we will see more of Kemp in the future, his initial performance at the school talent show is a true cornerstone of his career. This young boy could be the next Ed Sheeran before we know it.