For a person suffering from dystonia, a neurological disorder that causes involuntary muscle contractions, life can be pretty tough. People with this condition experience difficulty in controlling their speech as well as other movements. But this is not something that would stop Brittany Adler from becoming a pediatric therapist, helping kids at Hippotherapy clinic, and standing up for herself.

Speaking to A+, the 24-year-old lady shared her horrible experience while ordering at a restaurant. Apparently, the cashier of the restaurant in Miami, Florida couldn’t understand her order for gingered brussels sprouts. The rude restaurant employee just gave her a funny look and walked away from the counter, instead of asking for clarification. She could have confronted the cashier for being disrespectful yet Adler and her friend just left the restaurant in total confusion.

When they reached another restaurant, Adler asked for a pen and paper to write a letter to the employee.

And this is what she told the employee who ignored her. 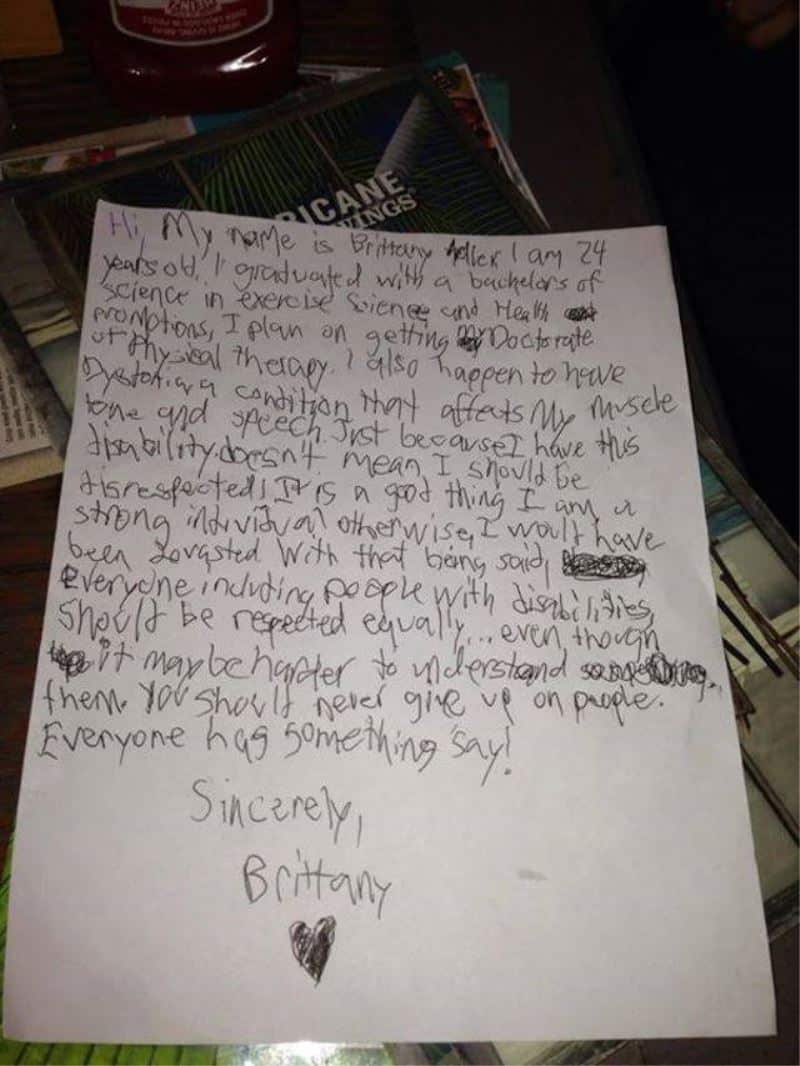 “Hi, my name is Brittany Adler. I am 24 years old. I graduated with a Bachelors of Science in Exercise Science and Heath Science. I plan on getting my Doctorate of Physical Therapy. I also happen to have Dystonia, a condition that affects my muscle tone and speech. Just because I have this disability doesn’t mean I should be disrespected. It is a good thing that I am a strong individual otherwise, I would have been devastated. With that being said, everyone, including people with disabilities, should be respected equally… even though it may be harder to understand them. You should never give up on people. Everyone has something to say! Sincerely, Brittany”

She then brought the letter to the restaurant for the employees to take turns to read. Everyone including the rude employee to the manager were all apologetic after reading her message. The manager even tearfully revealed that he has a daughter with disability.

For Adler, she taught them a very important lesson about acceptance. Adler even created a Facebook page called Brittany’s Message to spread acceptance and awareness. In her interview with The Mighty, Adler said:  “This is not disability awareness but human awareness.”

“Just like no two fingerprints are the same, no two individuals are the same. Each one of us is special and unique. We each have something to offer one another. If all of us were the same, the world would be a boring place,” she added.