Look, public displays of affection are not for everyone. Not all are open to doing it and not all are keen to seeing it. For some people, making out is not fit for public viewing. Not all are comfortable with seeing lovers exchange spit or grope each other for all the world to see.

But what about kissing someone on the forehead? I’m totally all right with it. It’s a sweet gesture that no one should take offense at when they see it even in a public place. Right?

Well, this woman from California didn’t think so. Not only did she disapprove, she actually lost her marbles and ranted all over the place. The girl had a total meltdown. She called the couple out for supposedly being obscene in a public place, which is kind of nuts because it was just a forehead kiss. So she wanted the pair out of the restaurant and of course they protested because they felt like they were doing nothing wrong and it was obvious that the woman was just overreacting.

This woman saw the forehead kiss and started yelling. 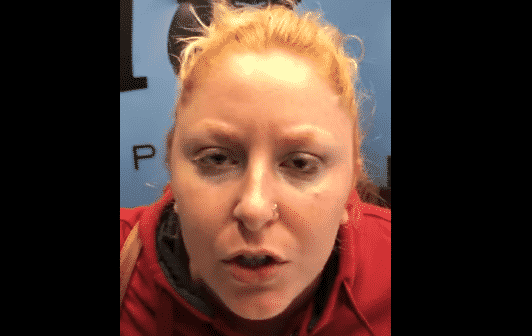 Then the plot thickened. The girl (the one who got kissed) called the ranter a heinous person. This prompted more outbursts from the ranter and proceeded to call the girl a prostitute and a slut. Wow! She advanced towards the couple and the man, who was filming the whole thing, told her to back off. The ranter really lost it at this point; she claimed that the couple was actually having sex in the restaurant and that they were sexually harassing her.

The server at the restaurant even got some heat; the ranter called him out and said she wants to speak to the manager. She was probably trying to get him into trouble for not making the couple leave the restaurant.

Needless to say, it was really intense.

Watch the video to see this public meltdown: