It’s a situation you wouldn’t want to be in but for some reason, this SUV got caught in the middle of a gun duel between two men.

The CCTV footage embedded below shows us a scene that looks like it came straight from an action movie as two men exchanged gunfire in Tanauan City, Batangas, Philippines yesterday, March 22, 2016 at around 3:00 PM.

According to a report by Abante, a Philippine-based news website, the Tanauan City Police has identified the two men as Petrolino Lascano and Restituto Sode with the former eventually leaving the latter lifeless after receiving fatal gun shots.

The CCTV footage captures a duel between two gunmen in the middle of the streets.

The authorities identified the men as Petrolino Lascano, the suspect, and Restituto Sode, the victim.

What To Do When You’re Caught In A Public Shooting

In an article published by BusinessInsider, Geoffrey Ingersoll, a former U.S. Marine, shared some insights about what to do when you’re in public and gunshots start ringing out.

The first thing to keep in mind, according to Ingersoll, is to not freak out and stay calm.

“This seems like common sense. Matter of fact, all of these will seem like common sense. But you wouldn’t believe how many people hear gunfire in a public place and just stand around, heads all in the air, bewildered, looking this way and that.” 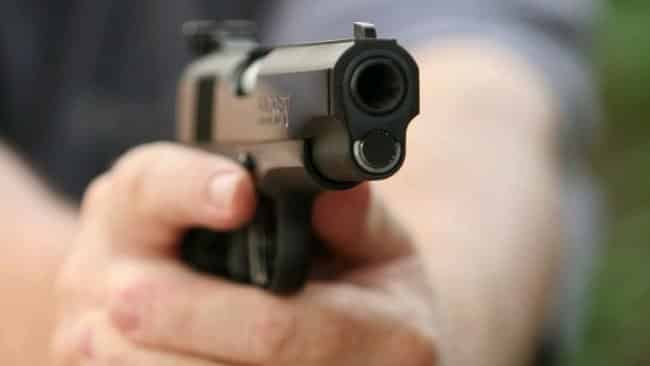 Screaming is likewise a bad idea.

“If you find yourself in a situation like this, keep your mouth shut. The last thing you want to do is make the shooter notice you.”

Ingresoll also added that it is important to “put something in between you and the shooter, preferably something that blocks his sight completely” such as a tall grass. Better yet, find something that can cover and protect you such as a concrete embankment.

Finally, identify the threat and move away.

“From your position, Try to identify where the threat is, then move away slowly, keeping a low profile, keeping that piece of cover or concealment between you and the threat,” Ingresoll said. “Don’t be a hero! Leave that up to our men and women in uniform.”