‘Humanity is the greatest religion.’ –HatemKaak

We have different religions and beliefs but this awe-inspiring story tells us that we are one in our faith in humanity.

Aucklander Harman Singh become an instant internet star because of his heroic deed after witnessing a car accident involving a 5-year-old boy in Auckland, New Zealand. The 22-year-old Singh is from India but is currently in Auckland studying a business course. According to Singh, he was in bed when he heard tyres screeching so he hurriedly went outside.

Harman Singh didn’t hesitate to break  religious protocol when he removed his Sikh turban in public to help someone and was commended by many people worldwide.

I saw a little boy lying in the road and there was a lot of blood coming from the back of his head.

The boy was on his way to school with his sister when the accident happened. The selfless Sikh did the unthinkable when he removed his turban to tend a seriously injured boy.

‘I started to roll my turban up but I put it back on again,’ he explained. I thought afterwards that this had been a bit of a mistake. When I saw the little boy was bleeding I decided this time I would take the turban off and use it. Anyone would have done the same.

Photo of Singh taken after the accident tending a child with a serious head injury. 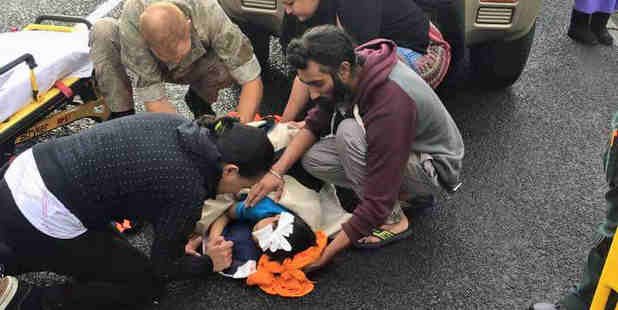 Sikh religion requires men to keep their heads covered by turbans in public but Singh has defy the norms of his religion to help someone in need. His act of kindness has earned him support and praises from many people all over the world.

Total strangers are asking to be friends on Facebook and thousands of people have said ‘Well done’.

I was only doing what I had to and trying to be a decent member of the community, Singh added.

As for the little boy, he suffered from multiple head injuries, but is  now in a stable condition and on the road to recovery according to Starship spokeswoman.