People can say that in a bathroom the toilet is the dirtiest spot and that statement is true because it is where you empty your bladder and bowel.

The toilet is where you can commonly find microorganisms such as E. Coli and Staphylococcus which are detrimental to one’s health when it enters the human body.

Here is a brief background about the two organisms mentioned earlier: E. Coli is commonly found on human and animal intestines which can cause diarrhea, UTI, pneumonia or worse, kidney failure.

On the other hand, Staphylococcus can be the reason for some medical conditions such as boils, impetigo, cellulitis, skin abscess, impetigo, wound infections and brain abscess on some occasions.

There are different types of bacteria that fly into to the air whenever we flush the toilet, it can spread up to ten feet away. 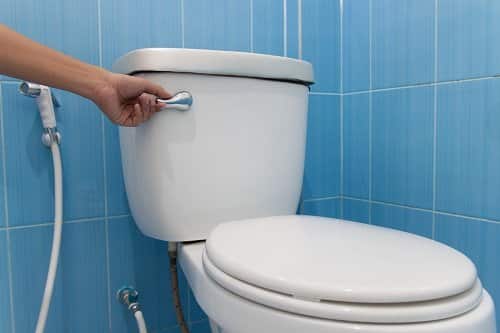 In the video, Mike Rowe of Discovery Channel’s Dirty Jobs showed how unsanitary a bathroom could be after flushing a toilet. The man in the video was asked to urinate and they used a special light to see what happens every time a toilet is being flushed with the lid placed up. Surprisingly, the process of flushing caused mists to come out from the toilet and spread out to the entire room.

The mists can spread for up to 10 ft., some of which landed on the toothbrush and razor. Using the exposed items, the guy brushed his teeth and used the razor to shave. It was stated that our body has defense for these “bad” microorganisms but of course if you think about it, these bad bacteria enters the body and spreads in our blood. Also, the razor when used scrapes a part of the skin which opens a portal of entry for the germs.

Watch the Video on How Bacteria Can Spread Through Toilet Flushing:

To be safe, the toilet lid should be closed whenever it will be flushed to avoid the spread of these microorganisms. Our toothbrush and razor should always be covered or kept away from the toilet or put them inside a medicine cabinet for protection. We can never be sure when our body will get weak and be susceptible to infection so the best thing to do is to prevent the spread of bacteria by practicing good hygiene at all times.