The adorable little baker who stole netizens’ hearts is back with a brand-new recipe. Roman, the sweet two-year-old host of Roman’s Cooking Show, has returned with another yummy treat. For Thanksgiving, the toddler decided to make turkey pot pie.

Roman’s first claim to fame was his adorable debut on his mom’s YouTube channel where he baked a sprinkles-covered cake followed by an awesome pizza recipe. Not surprisingly, the little boy has gained so many followers although he only releases one segment of Roman’s Cooking Show per month. Needless to say, Roman had something special lined up for Thanksgiving. In addition to that, he showed off his impeccable chopping technique.

The adorable little baker finally wearing a shirt under his trademark apron. 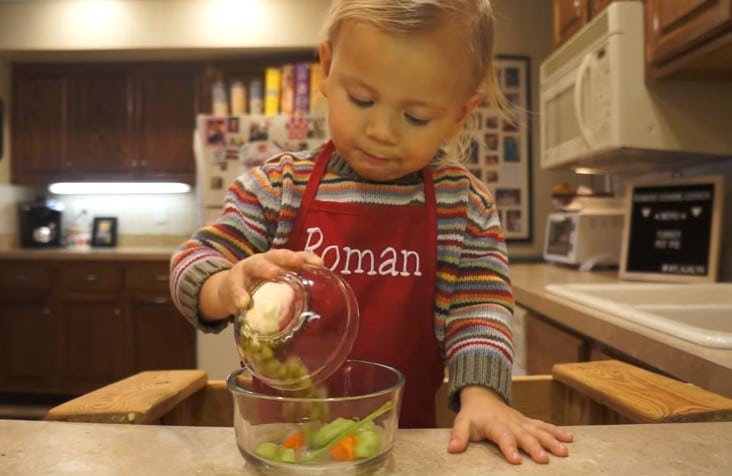 As usual, the little baker starts off by politely asking his mommy for help. However, he is determined to chop the carrots on his own.

According to Roman’s mother, he uses a Kiddie Food Kutter, which is a safe children’s knife. Unfortunately, it isn’t very effective at cutting the carrot. The exasperated toddler decides there’s a better way to get the job done and chops the carrot with his teeth.

Roman is still up to his old antics, tasting the ingredients as he works. He’s also proud of his work, calling it “perfect” even before he places the decorations.

Roman shows off the ‘R’ that will be placed on top of his creation. 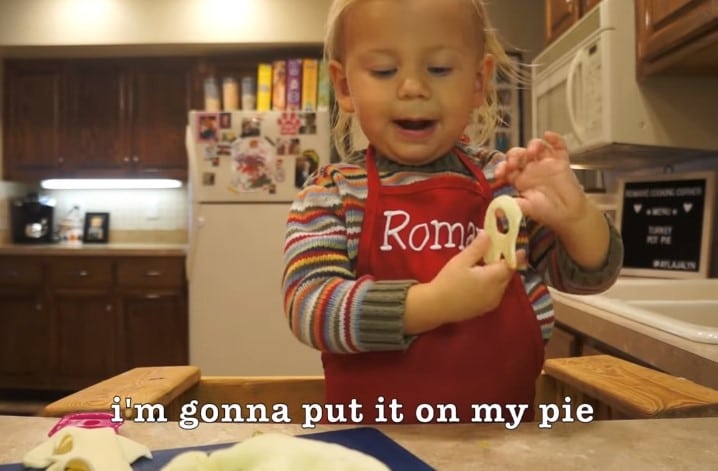 Once again, Roman’s fans couldn’t help but gush over his adorable video.

“His technique for cutting carrots is phenomenal!!!﻿”

“So adorable he whispers to himself, ‘it’s perfect!'”

“When he can’t cut the carrot and start chopping it with his teeth… I died and went to heaven from the laugh and the respect for this HUGELY RESOURCEFUL young man. Bless you all you are awesome…!!!!!﻿”

The Christmas edition of Roman’s Cooking Show has not yet been uploaded on YouTube. Nevertheless, the little baker’s fans are waiting for his next return.﻿