While most people would rather adore the calm touch of the fine sands of Teahupo’o in Tahiti, a trip to this paradise will not be complete unless you try surfing on its roaring waves.

Surfing is still considered as an extreme sport by most people. Majority are still quite in awe and envy those who has mastered the craft well. True enough, an Aussie daredevil created a big wave as he grasped the art of balance and speed while crossing the monstrous waves of Tahiti.

Not with a surf board but with his own motorbike! 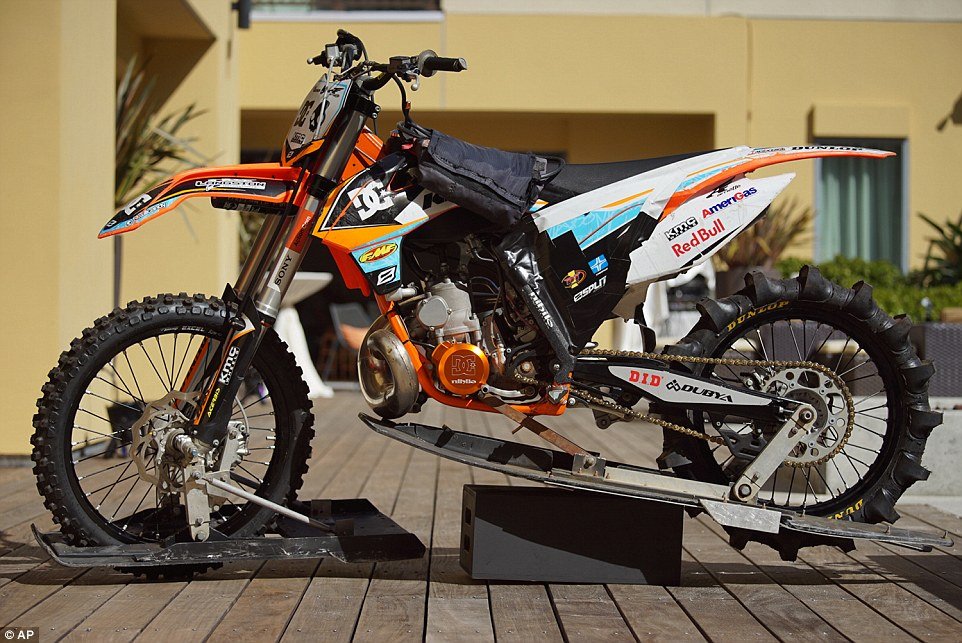 Yes! We’re talking about a two-wheel vehicle that was specially designed to catch the giant waves. 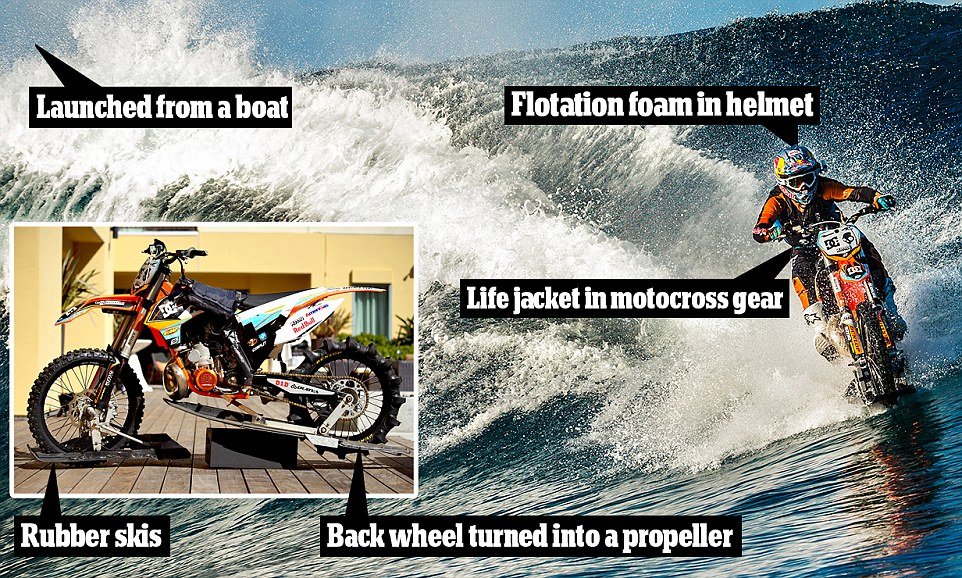 Although the 34-year-old admitted of spending two years to completely perfect the said stunt, he never lost faith on making the impossible doable and seamlessly effortless!

In the released video entitled “Pipe Dream”, the modified features of the KTM 250 SX dirt bike included the installation of rubber skis and a back wheel similar to a propeller causing an illusion of a floating speedy ride. Thanks to the ambitious sponsor DC Shoes who made this event possible. As DC Shoes executive Jeff Taylor mentioned, this is yet to be one of their most daring projects in history.

“Robbie is equally as visionary as he is talented on a dirt bike and we’re happy to have enabled him to truly defy convention,” Mr. Taylor said. 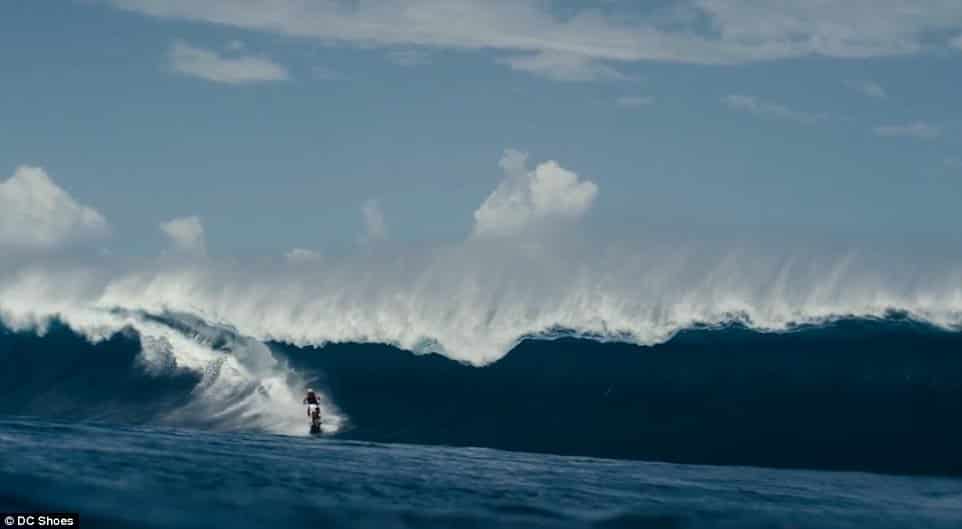 Apparently, who would ever think that a long-dreamt surfing stunt would actually jumpstart after watching his wife wakeboarding anyway, right? 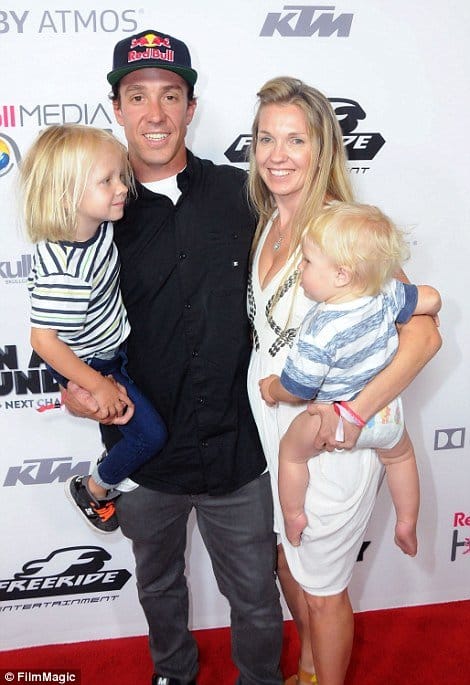 “I fantasized putting skis on a bike and riding on water. It was a stupid vision at the time, but I kept toying with it, playing with designs and concepts, and eventually it became a reality,” Maddison told Surfer Magazine.

At the early age of eight, Maddison knew right then and there that a special bond was written in the stars. 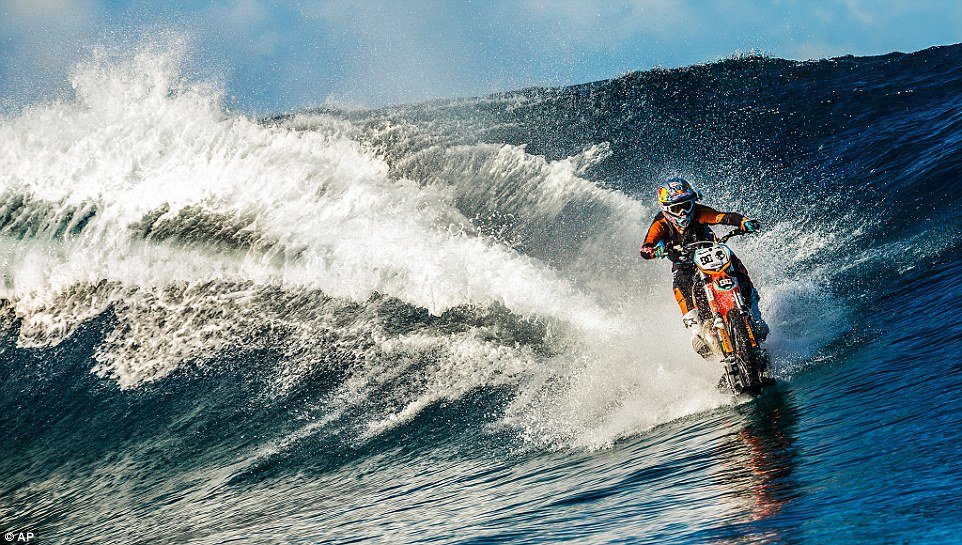 Soon enough, he was already in unison with the great heights of the tides.

“Honestly, the whole way I imagined I needed to ride the wave on my bike was wrong, but after watching some footage, with my knowledge of surfing I realized I had to adjust to be up on the face of the wave—and I’m comfortable being there because I spent the majority of my life dropping in on the face of waves,” he said.

Although the project seemed to be a critical one, Maddison did not have any second thoughts on pursuing the idea of being the first man to run in water. 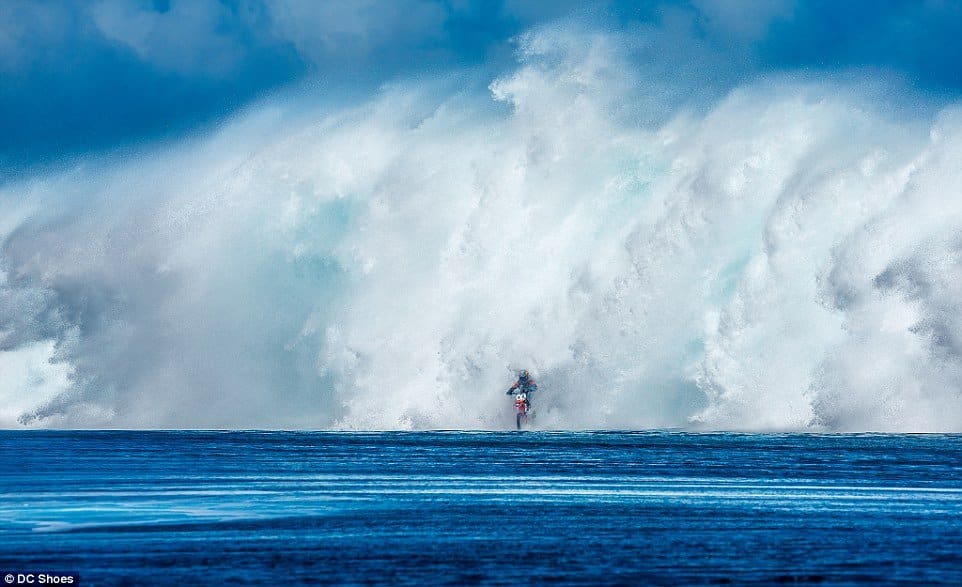 Truth be told, a maximum of four hours was consumed every time the dirt bike will sink. 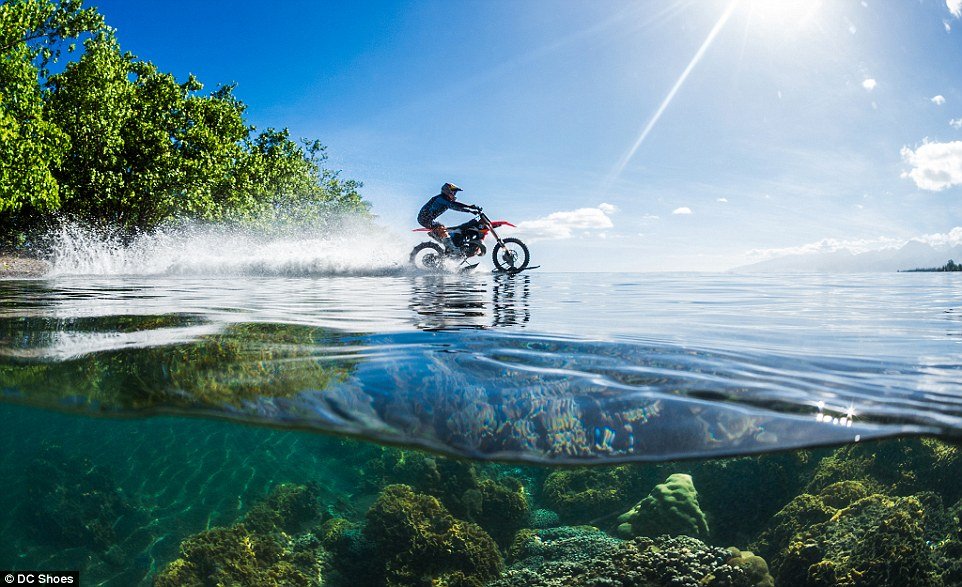 “’It’s not just a standard bike by any means, there’s a lot of work that goes into it and every time we sunk it, it was like four hours of work to rebirth it and get it running again. I had these specially-made rubber blocks that were sealed on to the tyre, that just allowed me to keep propelling on the water. The height of the ski and where the skis are positioned on the bike is very crucial,” he added.

Buddy Morgan, Maddison’s mechanic, shared with Transworld Motocross magazine the difficulties they had to face just to get the perfect type of skis and tires.

“Contrary to what you might assume, the overall power output of the bike didn’t have that much effect on its ability to ride across the water. Instead, it was the shape and angle of the skis and the number of paddles on the rear tire that made the most difference,” Mr. Morgan said.

As for Maddison’s stunt, a ramp was needed to initiate speed and momentum prior launching into the waters. 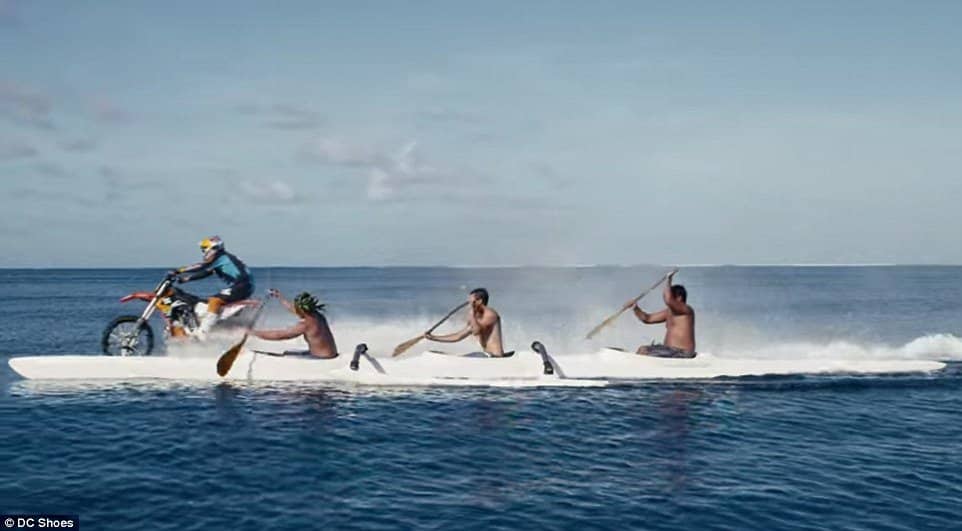 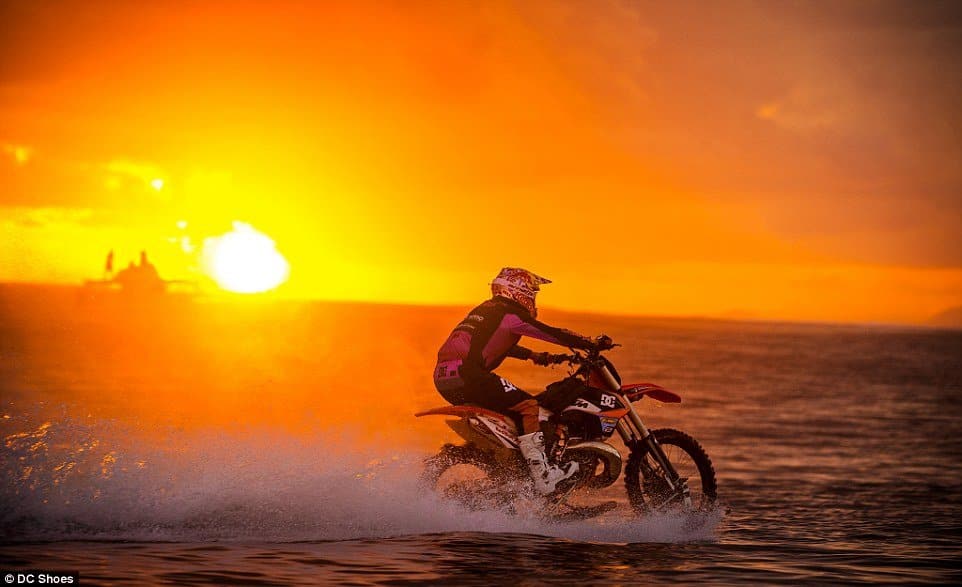 Although the short vid may seem as simple as it appear, the production of a good footage summarized all the careful takes and editing and a number of death-defying moments either carrying Maddison onto the waves or pushing him off of his bike. 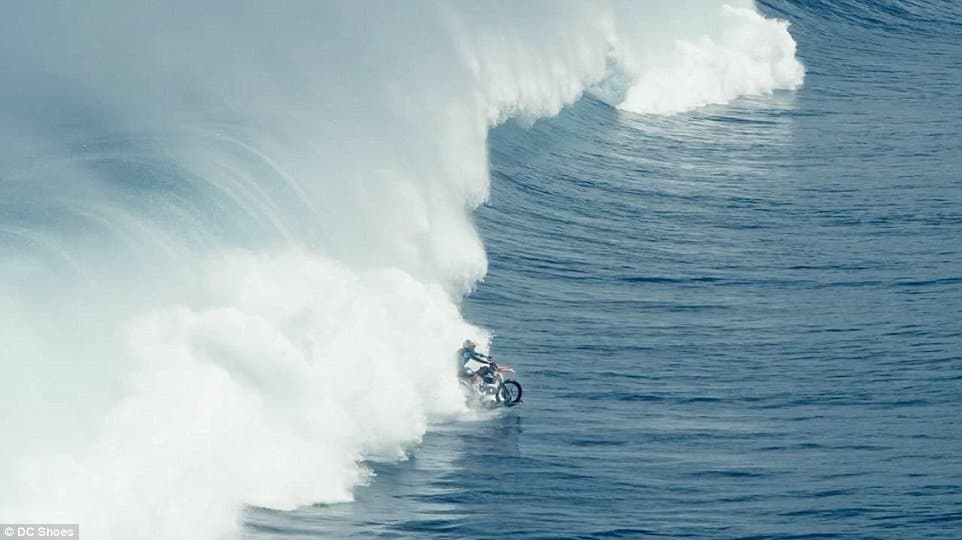 “I launched off a boat to get onto the wave and then once I carried I had to track this wave for about 500 yards [457 metres] to get onto it. And once I got to this point I realized it was all over… Some say it was a 20 foot wave, I don’t know, but yeah it took me down and I was struggling – I was lucky to get out of this. You don’t see it but I absolutely get spanked there and the bike hits me in the back, I lost the wind out of my sail but lived to tell the story and I’m just so stoked the way it was received around the world,” Maddison shared. 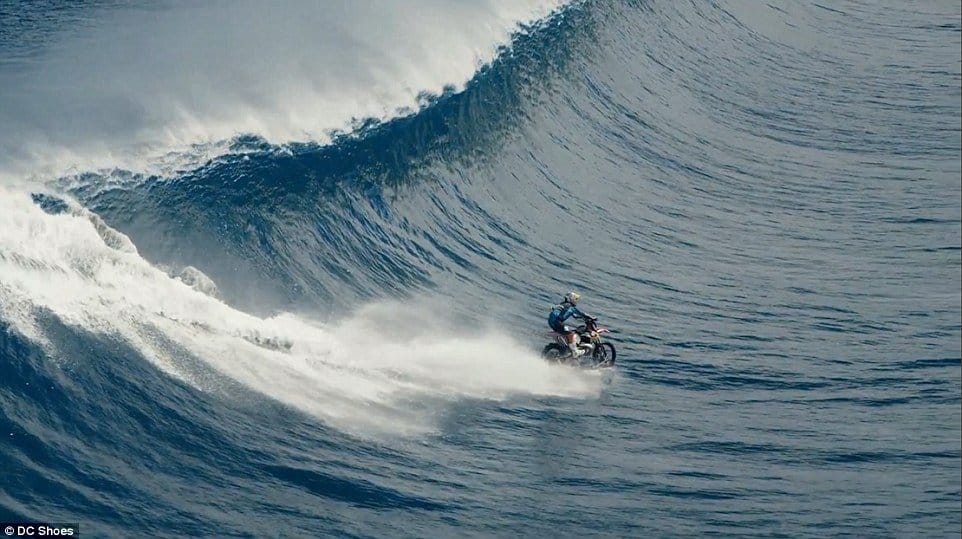 And so, to prevent any more accidents from happening, wearing of a full motocross gear allowed Maddison to maintain continuity and extra allowance to float. “The helmet’s got a lot of foam in it which is a lot of flotation, I had a PFD lifejacket number three on so I had a lot of flotation,” he said.

This is not the first time for Maddison to do a do-or-die kind of a stunt. 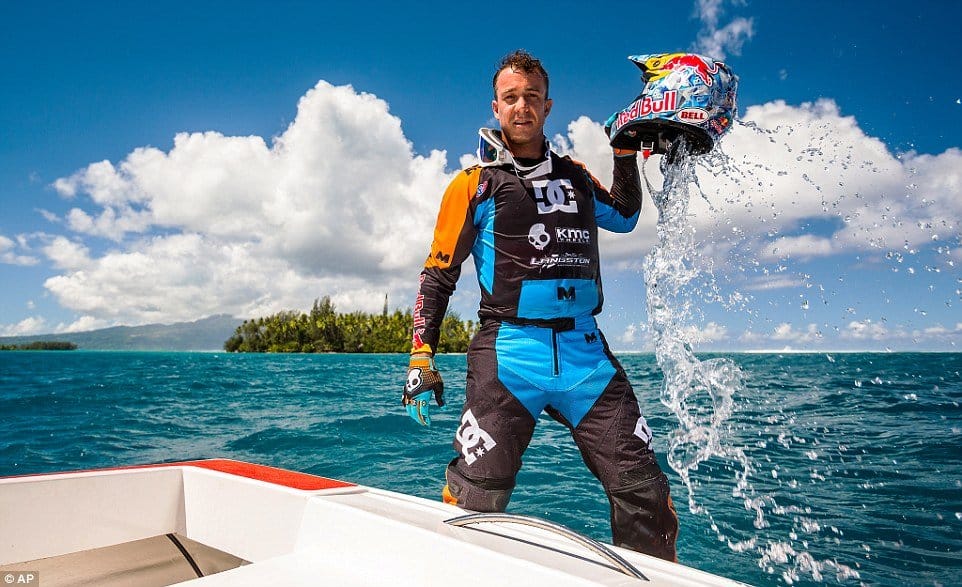 He was also able to pull off a stunt double for Daniel Craig in Skyfall, jumped across the Corinth Canal in Greece and did a backflip while jumping the Tower Bridge in London.

Still having doubts? Then watch this and see for yourself!