Quick, think of things that can fall or dive from a cliff. A person maybe, an animal, a rock… a whole lake? Wait what, a lake?

Yes you read that right. Although a lake falling off a cliff seemed unheard of, that was what happened in the Northwest Territories of Canada when an unnamed lake “fell off” the arctic Fort McPherson hamlet, causing massive flooding in the area.

The lake has been preserved and held together by walls of ice and permafrost almost 30 meters thick. These permafrost barriers around Fort McPherson has been around for thousands of years, as remnants of the last Ice Age era when the Laurentide Ice Sheet was formed. However, ongoing and intensifying effects of global warming has slowly melted the permafrost around the area, and thus unleashing the waters of the lake.

Watch this timelapse video of the lake draining itself after the breach in its ice banks.

This process of ice headwalls melting is technically called a permafrost thaw slump. This phenomenon does not occur overnight, but takes a number of years, even decades. The increasing temperatures even in the arctic regions of Northern countries such as Canada, can now pose as extreme geohazards especially in residential areas. Aside from flooding, a thaw slump may cause icy mud flow that behaves like quicksand and can become death traps for animals and people. Luckily, Fort McPherson and the drained lake is quite isolated and thus, the lake runoff did not affect any residential areas.

The unnamed lake drained off. Researchers fear that the adjacent lake will also drain away in years to come. 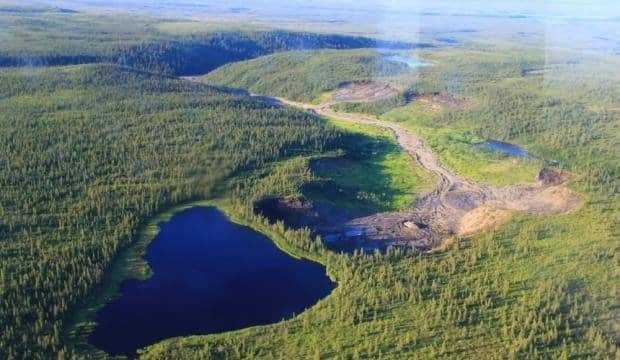 The bad news however, is that the unnamed lake has a bigger counterpart adjacent to it. And with the exposure of this new icy headwalls, the same thing might happen again and sadly, this is an event that is beyond human control. We can never mitigate natural disasters when they strike, all we can do is watch in awe with nature’s power and regret the neglect and destruction we humans have created.

What do you think of this story? Share your thoughts below.