Did you know that up to 1.25 million people die due to road accidents each year? One means of preventing this is installing strong metal bars or guardrails along the side of the road to deflect vehicles back into the roadway. However, the performance of these guardrails is affected by the size and speed of the vehicle that crashes into it.

In order to address this problem, South Korean company ETI (Evolution in Traffic Innovation) has designed a barrier system that not only absorbs impact energy, but converts it into rotational energy. When a vehicle hits the barrier, the rotational energy propels it forward instead of completely stopping it, thus lessening the potential injury of the people in the vehicle.

The rolling barrier keeps the vehicle slowly still in motion, thus preventing it from coming to a complete and abrupt stop. 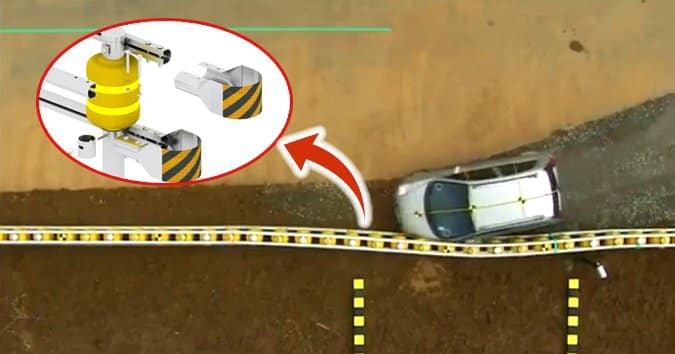 The barriers are made of ethylene-vinyl acetate (EVA), a type of copolymer that’s known for its ability to absorb shock. EVA is also very flexible and elastic compared with other polyethylene resins. It’s even lighter than rubber and more elastic than urethane.

The rolling barriers are made of a copolymer w are light and elastic. It is held down by metal supports. 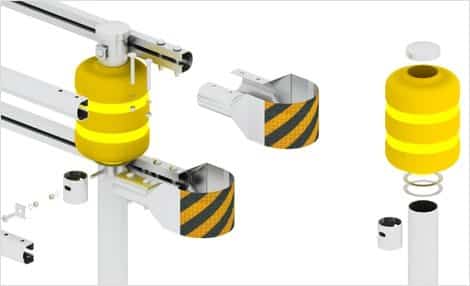 The rotating EVA barrels are made with three-dimensional buffering frames, lots of support, and high-intensity reflective sheeting for better visibility. These barrels are high enough to prevent vehicles from leaving the roadway, no matter their size. On top of that, since the barrels aren’t attached to each other, it makes it so much easier to repair each on in the event of a collision.

With these rotating barrels in place, vehicles are prevented from coming to a complete stop. And if a vehicle were moving at a high speed, coming a complete stop would greatly injure its passengers, even if they’re wearing seat belts. By slowing down the movement of the vehicle instead of stopping it completely, the rolling barrier system will prevent more serious injuries and even casualties!