An angler from Alberta is reminding people how garbage can destroy bodies of water and the animals that live in them after catching a fish that grew around a plastic wrapper. He shared bizarre photos of the fish on social media which were caught by thousands of people.

Adam Turnbull has a deep passion for fishing and has been catching fish all around Alberta almost every day. However, it is the first time that Adam saw a fish with a severely deformed body for living inside a Powerade drink wrapper. He told in a news interview:

“I was fishing at Strathcona Park when I hooked the fish…It fought like every other fish and then I saw the wound.”

An angler found a fish trapped inside a plastic wrapper. 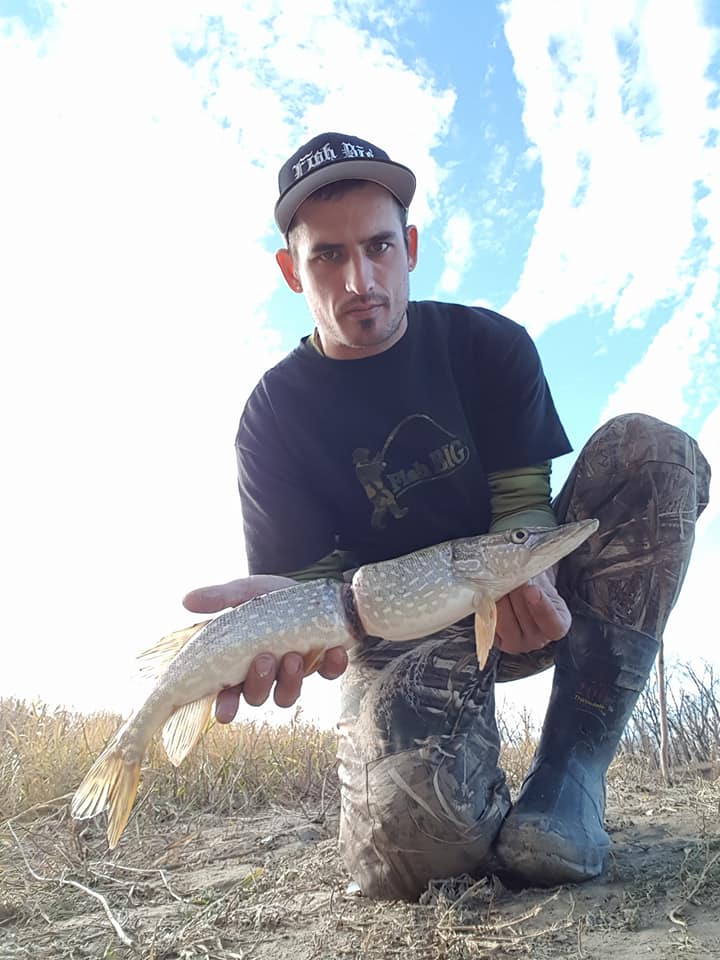 Initially, Adam thought the Northern Pike or jackfish had been attacked by another fish and is wounded. However, when he took a closer look, he noticed a wrapper around the midsection of the fish.

The rubbish was tightly coiled around the Pike’s body. The angler grabbed a pair of scissors to remove the plastic and there he saw that the part covered by the plastic was raw and irritated. He then held the fish back into the river.

It grew inside the wrapper causing its midsection to become deformed. 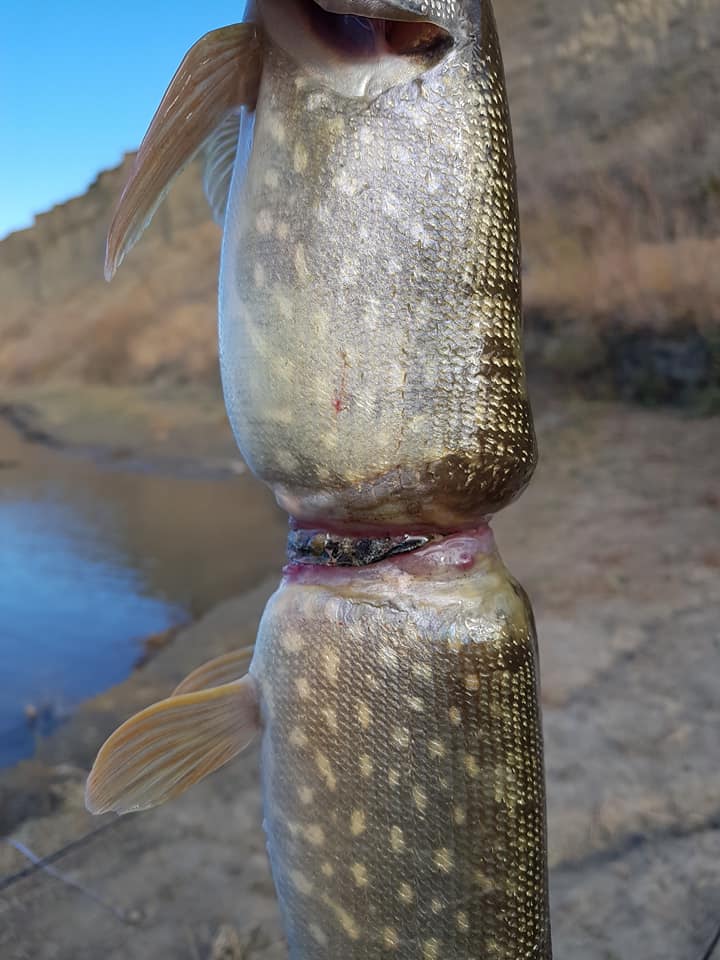 Bothered by what he found, Adam spoke to a biologist who explained to him the condition of the fish. He was told that the wrapper appeared to be squeezing the fish behind its stomach or on the intestines side. He was also told that if the wrapper was placed an inch or two forward, the Pike would have likely never fed.

Michael Sullivan, a fisheries scientist associated with the Alberta Environment and Parks, saw Adam’s photos of the fish and shared on Facebook, writing:

“It looked like it had swam into it when it was small and actually grew around it…Amazingly enough, it didn’t constrict the guts or blood system at all, so the fish could actually grow around it. We’ve seen loons tangled in fish line, ducks with their heads through six-pack holders, plastic bags wrapped around fish. It’s a bad thing. Luckily, they’re rare instances, but we’re concerned that’s the tip of the plastic iceberg.”

The fish looked like it was almost cut into half. 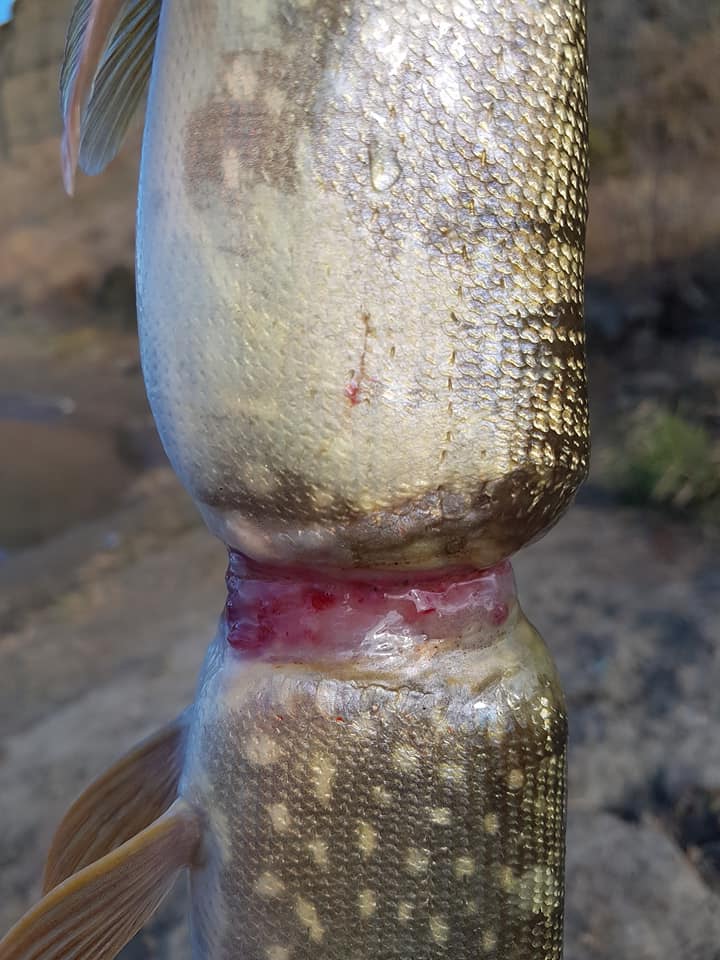 While these garbage post real danger to the aquatic life, Mr. Sullivan said that it’s the plastics that are not seen that are truly worrisome. He said that they usually find plastics inside the stomachs of Northern Pikes that feed on pop bottles. He also shared an eye-opening fact about plastic trash saying:

“That’s the grotesque thing about plastics — they’re going to be around with us for thousands and thousands of years…The only way to get rid of it is to stop putting it in the water.”

This reminds us how our trash affects the aquatic life. 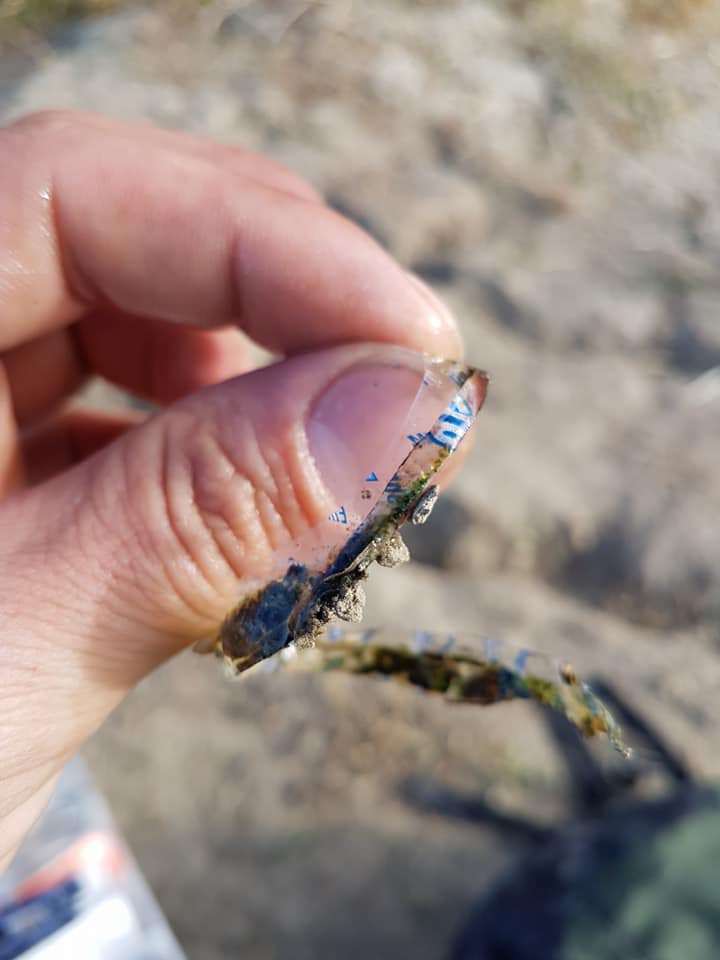 The biologist that Adam turned to for consultation said that the fish he found would likely thrive. He also said that the experience was a solid indication of how a small piece of trash can have a huge impact on an animal’s life.

“Pick up your garbage. This is a Powerade wrapper which takes up no room in your pocket until you get to a garbage can. Please share!”

Adam Turnbull asks everyone to be more diligent in disposing garbage properly. 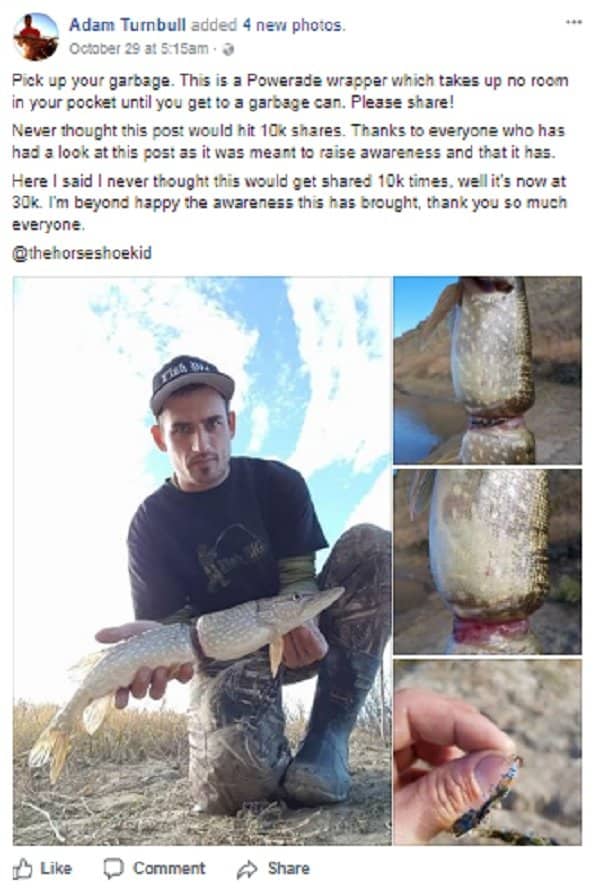 Adam also opened up about his thoughts on what he saw saying:

“I mean, for any person to claim they’ve never littered intentionally or unintentionally would be a lie for most of us.
But seeing what it does first-hand makes you really want to grab that piece of garbage you see laying on the ground, whether it was yours or not.”