“Has your daughter fed the ants?” This is not an ordinary question. Behind these words lie a brutal and horrifying truth that many young women from Africa know about. Millions of young girls are being subjected to female genital mutilation (FGM) against their will during the cutting season.

A girl is dragged from her own bed and taken to a “woman cutter”. Her own mother and relatives pin her head, arms, chest, and legs as the woman cutter forces her thighs open. She’d put millet flour on the girl’s private parts so she can hold it firmly…

Before, Anna-Moora Ndege uses a flattened six-inch nail to create a blade. 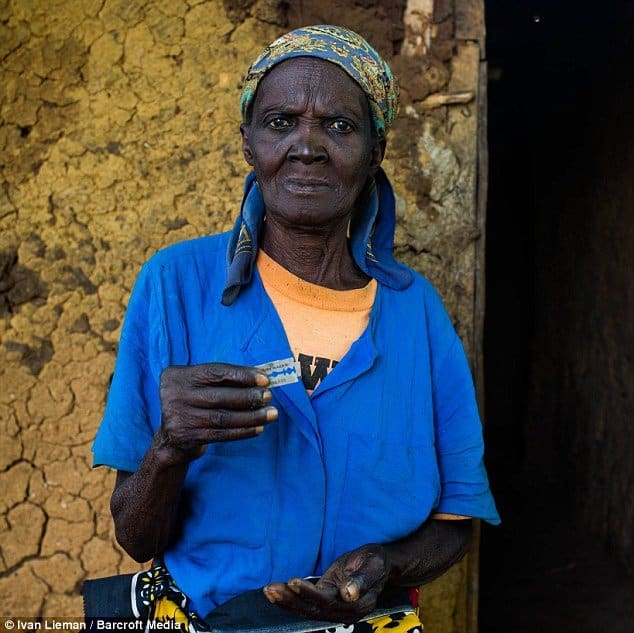 Now, she uses razors to cut a young girl’s most sensitive part without anesthesia. 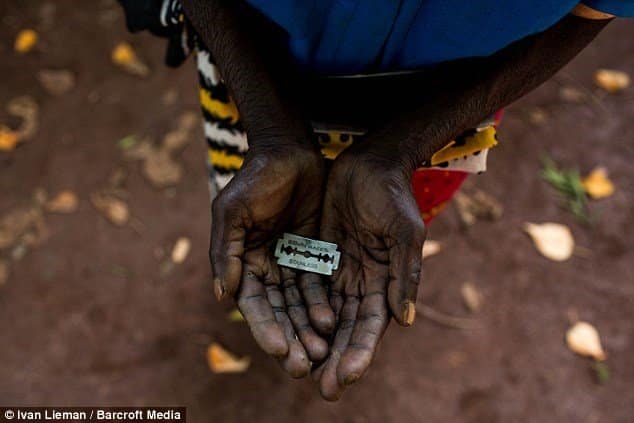 This is usually performed in unsanitary places. 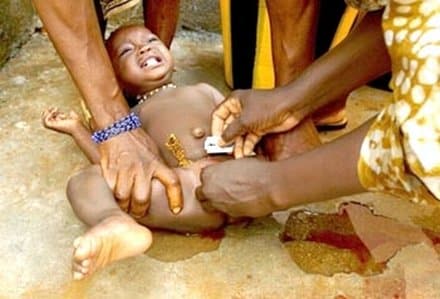 They’d use the millet flour to stop the bleeding after they’ve circumcised the young girl.

As part of tradition, the severed clitoris is put on the ground for the Safari ants to take away 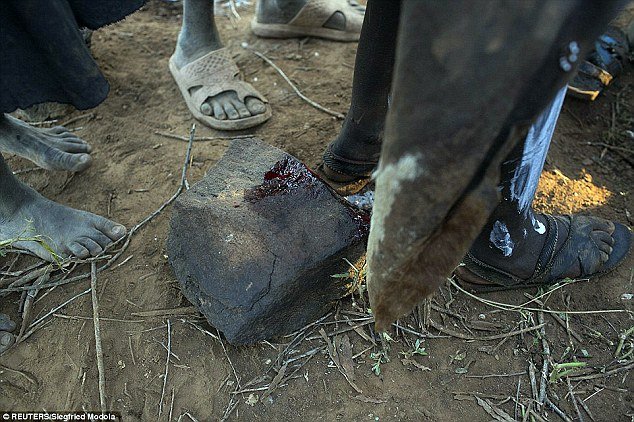 Asking a mother if her daughter has fed the ants… 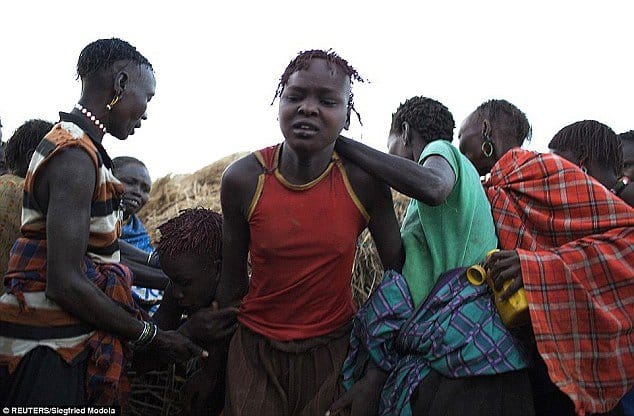 …is a way of asking if the little girl has already been circumcised. 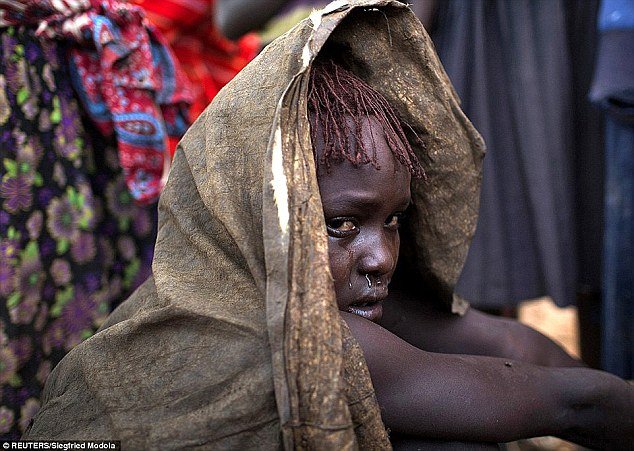 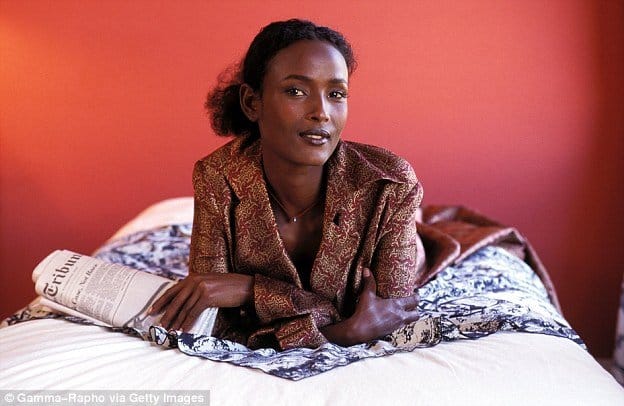 She suffered the same fate when she was just 13 years old.

“I was mutilated as a little nomad girl in the Somali desert. I almost died from blood loss, shock and an infection after this brutal torture. I suffer from nightmares, flashbacks and chronic pain.”

“I felt my flesh, my genitals, being cut away. I heard the sound of the dull blade sawing back and forth through my skin. It’s like somebody is slicing through the meat of your thigh, or cutting off your arm, except this is the most sensitive part of your body. I passed out. When I woke up… the worst part of it had just begun. The Killer Woman had piled next to her a stack of thorns from the acacia tree. She used them to puncture holes in my skin, then poke a strong white thread through the holes to sew me up.” 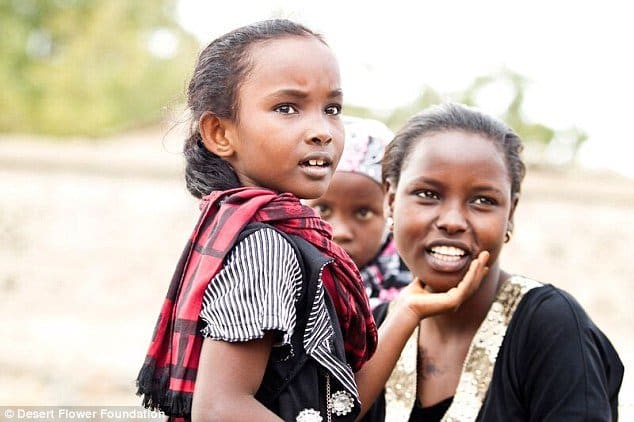 The third is considered to be the most extreme form—the clitoris and the labia are excised using a razor, glass, knife, scissors, or blade. The labia stump are sewn together but the cutter would leave a very tiny hole enough for the urine to pass through.

The life-long physical, mental, and emotional consequences of this non-medical and unhygienic procedure are innumerable. These women experience excruciating pain, particularly during their menstrual period as the blood gets trapped inside, and they also suffer from chronic infections.

But oddly, if the girl dies after the procedure, the mother is blamed 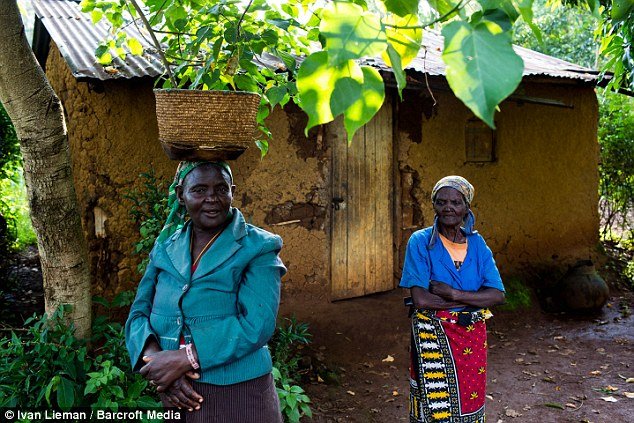 “If the girl becomes sick it is the failure of the mother because she should be at home looking after her daughter. I know two girls from this village who have died (after the procedure). One of the mothers was made an outcast. She was accused of allowing her daughter to die. The mother is blamed for being unfaithful to her husband. The girl was buried like a dog. She was buried without a proper funeral, without the proper respect”, Kerubo stated.

“I have known girls who are healthy to become sick after they are cut. If a girl is bleeding heavily after she has been cut she must lie down on the ground. A woman who has had sex that night must jump and this will heal her. It is like magic. I have known girls to bleed a lot and get tired but not die”, Ndege added. 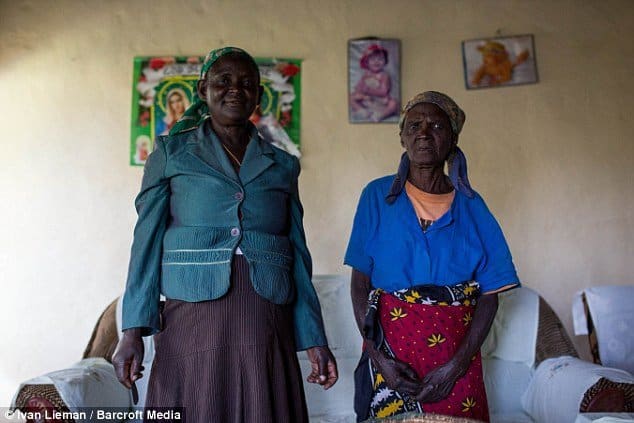 Ndege, along with Agnes Kerubo, are just two of the woman cutters in Kenya who perform this barbaric tradition out of a misguided belief that FGM prevents promiscuity.

“Girls are cut to ensure they remain faithful because the sexual organ is not there anymore. When you are cut you will not be a sl*t looking for men here and there like a prostitute…You are docile, waiting for your husband because after you are cut, sex is for having children not for anything else”, says 86-year-old Ndege who started cutting young girls 70 years ago.

According to Kerubo, 62, FGM is a central part of the traditions of the Kisi tribe.

“Circumcision is an important festival. It’s a celebration like Christmas. It unites people. There is feasting and drinking and dancing.”

“When you are cut that’s when you can grow healthily into a woman because the bad blood is not there anymore. In the body there is good blood and bad blood. After a girl is cut the bad blood is gone”, says Kerubo.

“Uncut girls are told they smell like a dog”, Kerubo explains.

“I was taught by the old people – my elders, my mother and my grandmother. I started to learn when I was about 12 and it took about four years to learn. After that I continued to practice. The cutter is more important than a midwife,” she added.

The people there also believe that participating in this age-old tradition helps the family maintain their status in the traditional community. The families of  young girls who are not cut become an outcast.

Anti-FGM campaigner Ester Ogeto said that some communities believe that a woman will not get pregnant if she is uncircumcised. 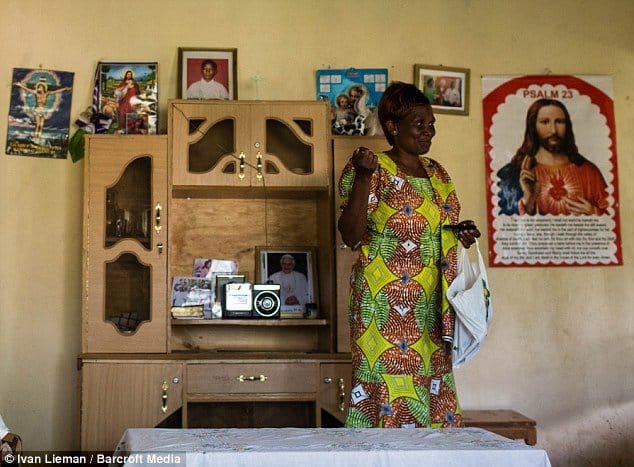 She also said that an uncut girl would be called “smelly” and that “her organ would grow until it touched the floor.” She would be unfit to the community and she will never marry and get pregnant.

Dixion Kibagendia, a cultural leader of Kenya’s Kisi tribe firmly believes that girls who are not cut “can’t control their emotions” and that uncircumcised women “can’t distinguish between her husband and other men”.

“Not being cut is a cultural taboo”, he says. 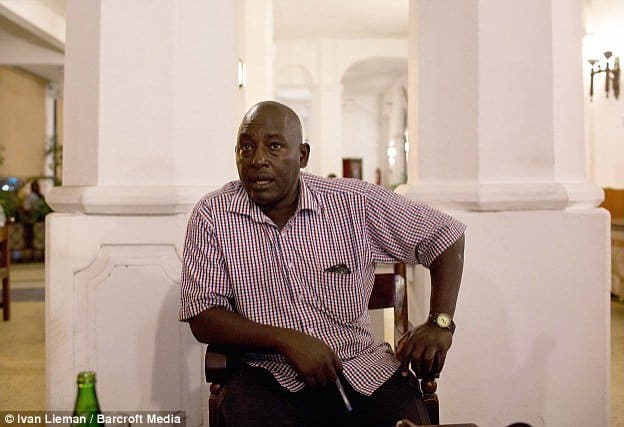 But the horror doesn’t end in Kenya. Come summer, thousands and thousands of young girls from Europe and North America will be brought back to Africa by their parents to undergo this dreadful practice. 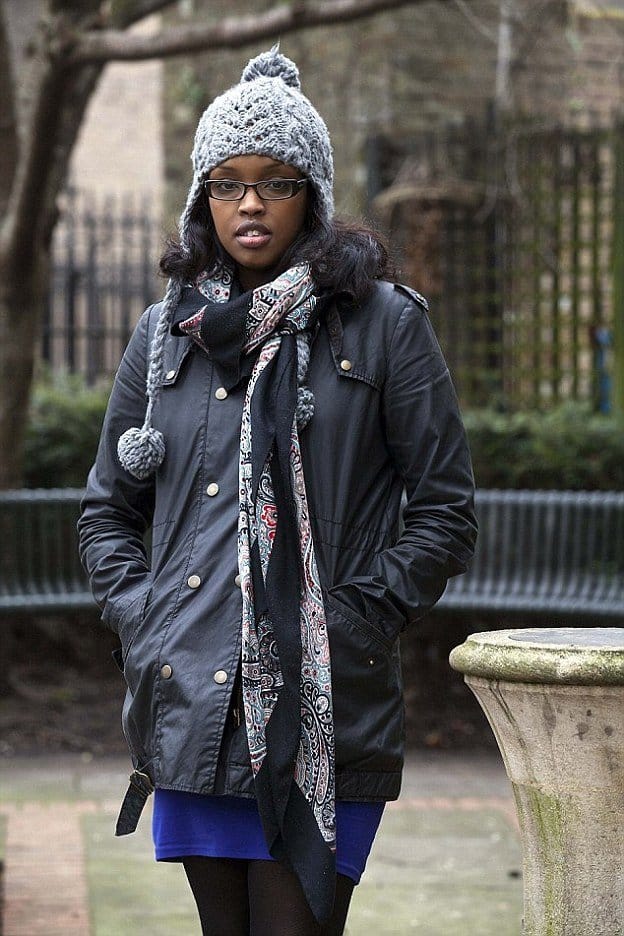 FGM victim Nimco Ali (pictured above), said, “They are the girls at the back of your classroom or the girl you could bump into on Oxford Street… but you don’t know they have just been through FGM”

Leyla Hussein an FGM victim from London recounts her terror… 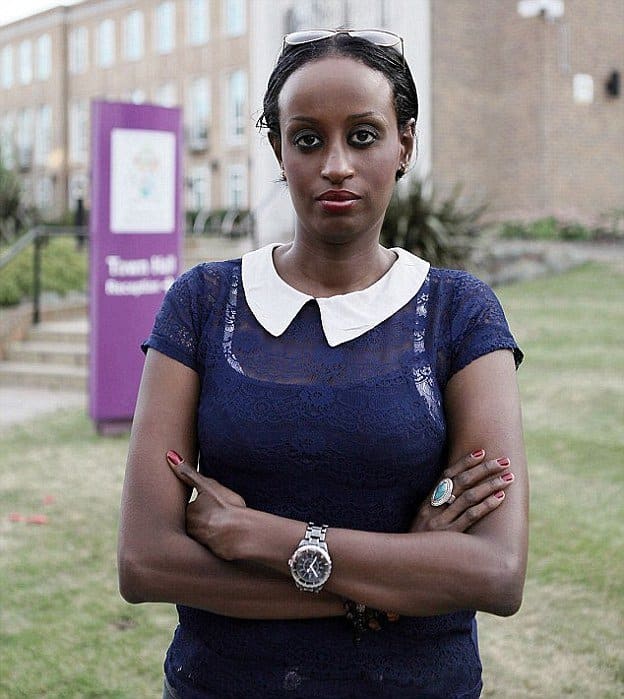 “Your whole body is in pain, the scream that you scream, meant I lost my voice for a couple of days”, the 32-year-old woman said.

Families are put under tremendous pressure to adhere to this custom even if they are already living in the West. Waris Dirie said, “Girls from African, southeast Asian and Kurdish communities living in the West are threatened by FGM. The immigrants brought the practice with them. The parents cut the daughters, because they fear the girls could become too westernised.”

Although it is illegal in several regions in Africa, there is little chance that the western leaders can do anything to put an end to this brutal tradition.

They believe the procedure will stop the women from engaging in sexual behaviour. 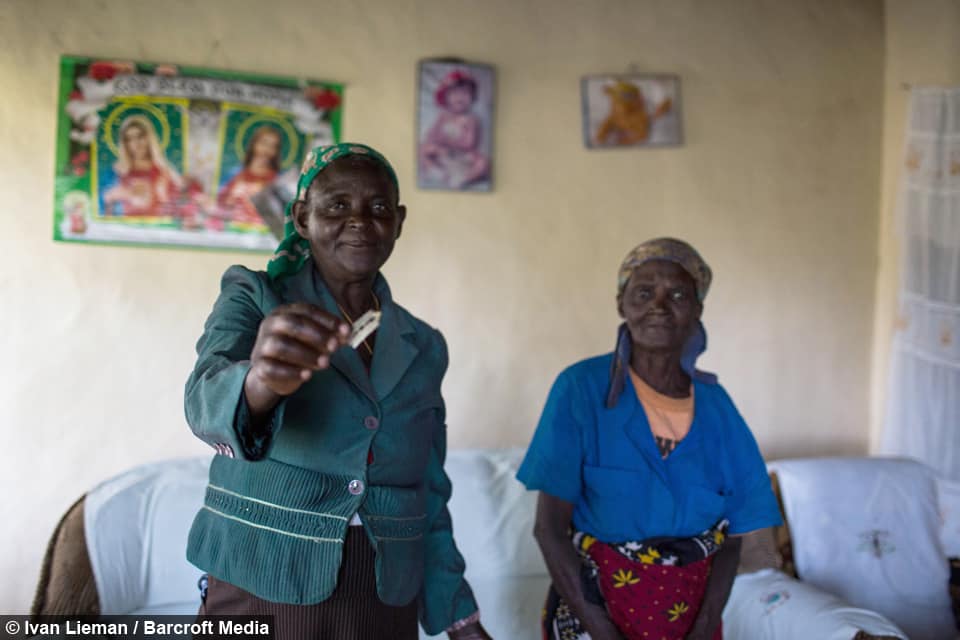 British Prime Minister David Cameron passed new laws through the Parliament to help save girls from FGM before the cutting season begins. The protection orders will allow the authorities, social workers, and councils to stop individuals who are suspected of taking women overseas to undergo FGM. Suspects and their potential victims will be forced by courts to hand over their passports and travel documents immediately.

“I fully support any activities, campaigns, laws implemented by the government to stop FGM. It is high time to eradicate this brutal crime on innocent little girls. Parents who force their daughters to endure FGM should be jailed” Dirie said.

Millions of voiceless young girls are being subjected to FGM. Some of these innocent, young girls have died because of this horrible and despicable practice, yet the horror continues.

It may be difficult to change the views of the locals and it may be next to impossible to totally eradicate the custom. But we can save these girls—one at a time–by spreading awareness about FGM including its horrors and consequences.