We all love a good story about perseverance. Recently, it’s an Australian girl named Phoebe who showed us that, yes, one can indeed achieve much as long as she is determined to move forward despite the odds – or, in this case, the world’s ridicule.

According to the persistent student, she encountered many difficulties, most of which were about getting bullied. In her own words, she said that she was “bullied relentlessly for years.”

She has even been labeled “too stupid” but she didn’t let it bring her down but instead used it as a motivation to do better.

Phoebe is not your typical student. She has been diagnosed with several learning difficulties. 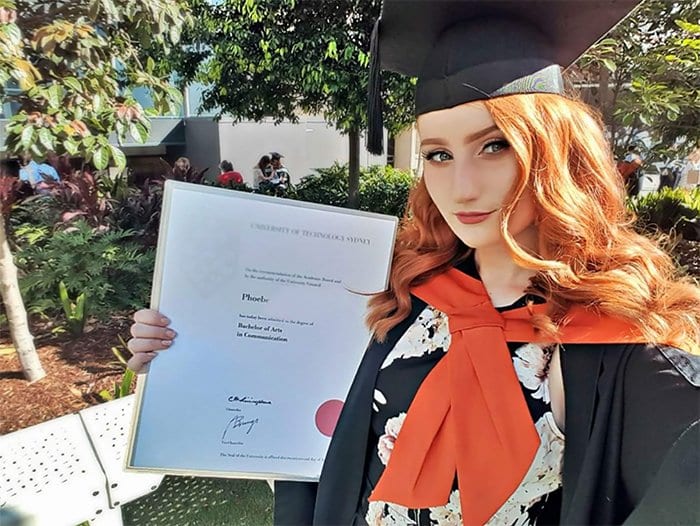 In a BoredPanda feature, we learn that Phoebe has “dyslexia (a reading disorder), dyscalculia (a difficulty in understanding numbers), dysgraphia (a deficiency in the ability to write), and ADHD (problems paying attention)”.

Because of the harassment, she has always felt nervous about “putting people on blast or standing up for myself”.

Much has changed now, however, as she proved to everyone that despite her conditions, she is indeed worth more than they think.

“To the teacher in HSC who told my parents I should drop out of class because I would drag down other students grades.

“To the Uni teacher who told me ‘I obviously don’t care about my education’ and made me cry in front of the class because I spelled words wrong.

“To the parents who asked a teacher to not have their child sit next to me in maths because their child would ‘become stupid too’.

“And to the education system that failed me, that told me I was only worth my 49 ATAR.

“After going through UTS:insearch to get to University, in my final semester of my bachelor’s I was formally diagnosed with Dyslexia, Dyscalculia, Dysgraphia, and ADHD. I have not only been able to finish my bachelor’s with only one semester of disability support but can proudly say have finished with one of the highest GPA’s of my course with the opportunity to do honors.

“So to those people who slammed me for not fitting the criteria of the ‘perfect student’, watch your back because us disabled kids are smashing you at your own game in our own way.

“Ps. shoutout to my amazing friends, family and tutors who have always helped and supported me through my journey.”

Following Phoebe’s heartfelt message, many people applauded her and even shared their own experiences.

Needless to say, the Australia student has become a hero and an inspiration for many. Congratulations on your well-deserved achievement, Phoebe!