There is something about Egypt, whether if its the tourist attractions, the food, or just the country’s cultural perplexity, that it sure is one of the most amazing places in the world. If you talk about Egypt, you would almost immediately think of the great Pyramids. Well yes, Egypt, to a lot of people is all about riding camels while taking pictures with Pyramids on your background.

But there are so many other attractions in Egypt that have far more interesting and mysterious past.

One of these attractions, is the Colossi of Memnon. This Colossi Of Memnon is a pair of massive statues, about 18 feet tall that depicts Pharaoh Amenhotep III, who reigned Egypt 3,400 years ago. The monument is located on the west bank of the Nile, just opposite to the city of Luxor.

The Colossi of Memnon towering over 18th feet from the ground. 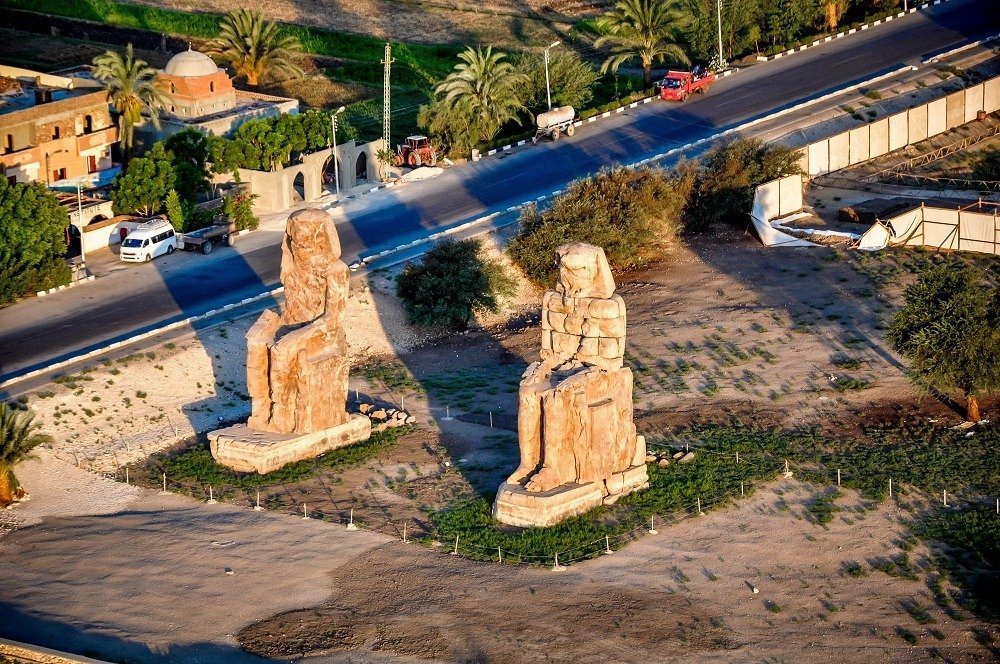 The Colossi of Memnon was built as an entry way or gate to Amenhotep’s memorial temple but unfortunately, with the Nile river flooding throughout the centuries, the temple degraded slowly and was abolished by future Pharaohs. But this begs the question, Colossi of Memnon was made for the Pharaoh Amenhotep and it even depicts the Pharaoh itself, yet it was named after a different person?

The reason for it being called Colossi of Memnon and not Colossi of Amenhotep or whatnot because in 27 BCE a large earthquake damaged one of the statue that caused a collapse from the waist up of the statue and cracking the lower half. After this unfortunate event, the statue started to create a sound coming from the lower half, usually at dawn, and early tourists from Greece and Rome attested to hearing this sound.

The most probable cause for the sound could be the rising temperature as the sun rises together with the the evaporating dew. Because it was the tourists, Roman and Greek tourists who found the sound interesting, they decided to call it “Memnon”.

The Colossi photographed back in the 19th century. 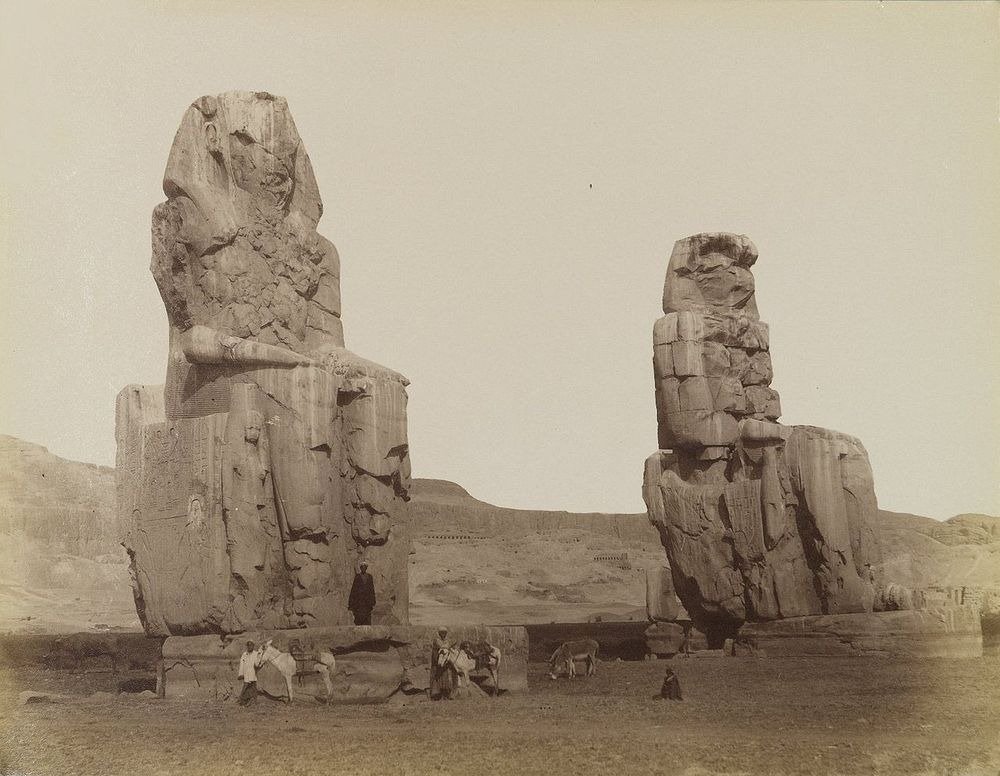 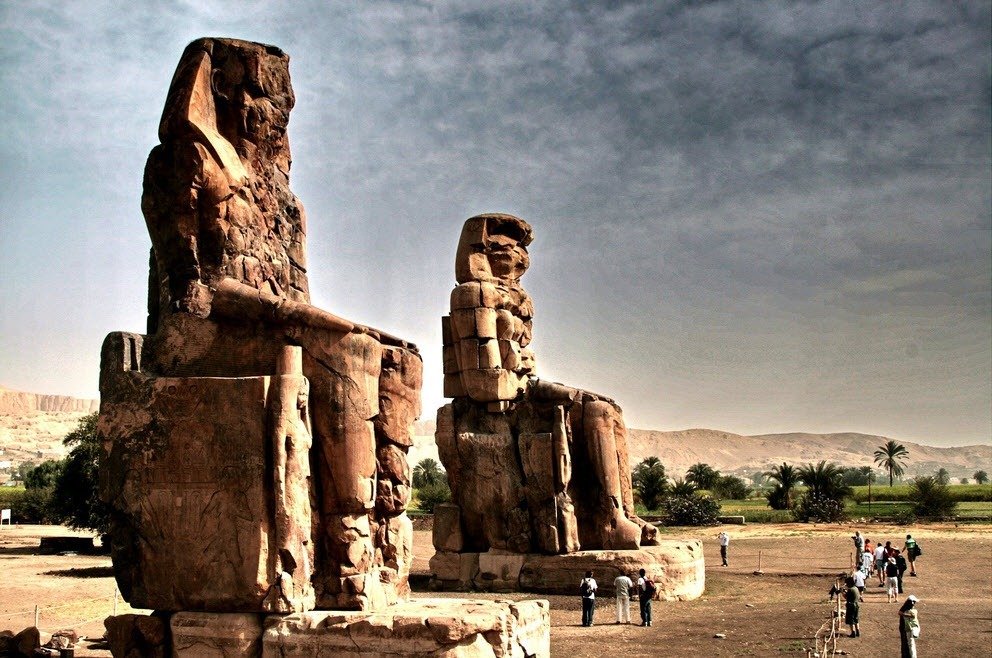 Memnon was a Trojan war hero as well as the King of Ethiopia, he was the one who led the army against Troy but was slain by Achilles. According to the myths, Memnon is the son of Eos, the goddess of dawn. When Eos heard her son died, she shed tears for Memnon and thus the name was born. The sound produced by the statues relates to the story of Eos, the goddess of dawn, mourning for Memnon.

Around 199 CE, Septimius Severus, a roman emperor decided to have the statues fixed and after that the sound coming from the statues were soon unheard of. Now, the statues are a roadside attraction and is still truly an amazing part of Egypt’s history.

Colossi of Memnon situated alongside a road in Egypt. 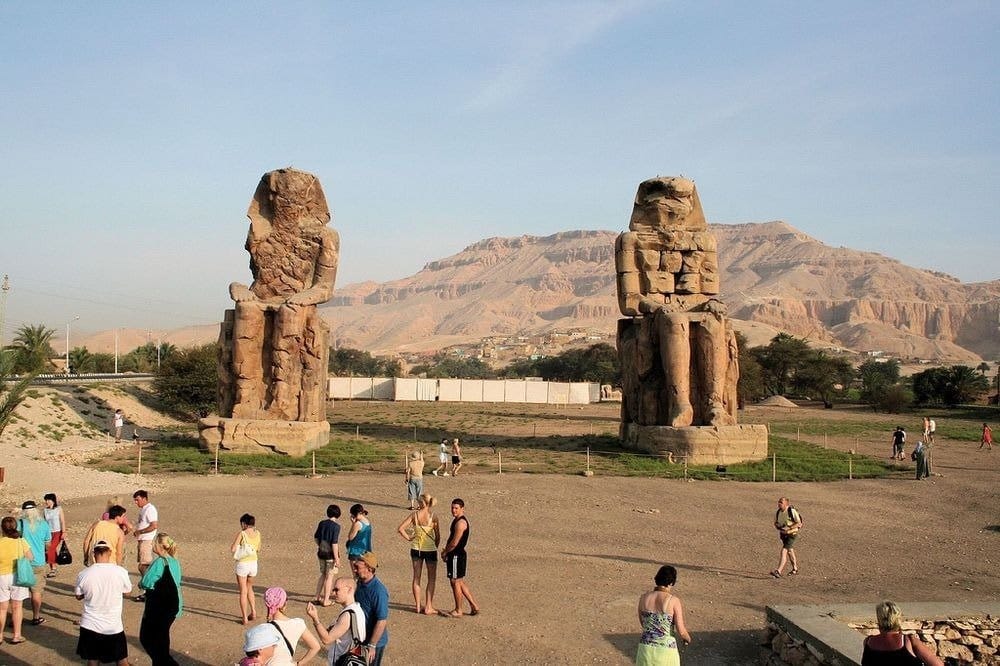