In times of catastrophe, there is nothing more necessary than an alert and calm mind to survive. We people should prepare for food, money, survival tools, and clothes to help us stay healthy until the disaster ends. However, due to panic and fear, some of us forget what we ought to do and these scenario has already led to many lives lost.

A hurricane sure sounds scary most especially when we don’t usually experience it in our region. Unfortunately, a big hurricane landed on Texas which, according to locals, was the strongest so far in the past five decades.

A dog was seen wandering around the streets of Texas during Hurricane Harvey and it captured the attention of many on social media.

Hurricane Harvey destroyed many properties on Texas last weekend. While people were running for their lives, their furry friends were almost forgotten and some were left behind. A clever dog, however, mustered enough courage to be able to survive the disaster.

Recently, Tiele Dockens, who was then helping some relatives and friends who evacuated, spotted a dog carrying its food through the streets of Sinton, a city in Texas.

Tiele thought the scene was cute and took a photo of it. She then shared the image on her Facebook account under the hashtag #refugee and captioning it with:

“This dog is walking around Sinton Texas carrying a whole bag of dog food with him.”

Tiele Dockens’s post about Otis received great love from Facebook users saying the dog was smart to do such effort. 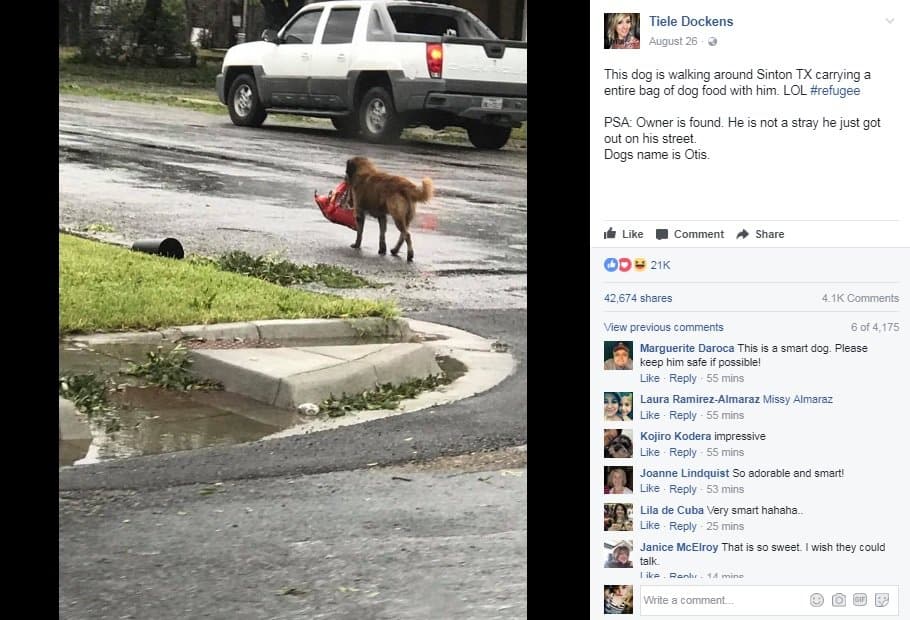 With thousands of people inspired by the moment, the photo quickly became viral. The dog was later identified as Otis and has an owner who was looking for him.

Salvador Segovia’s grandson was found out to be Otis’ owner. The old man said he left his grandson’s dog in their home’s screened-in back porch and had some food and water served to him. However, it seems that the huge storm scared Otis and it led him to bust open the screen door and ran away the night before he was seen on the streets.

According to KickerDaily, Segovia checked the porch when he returned the next morning but noticed Otis and his bag of food were already missing. The man said he drove around the area searching for his pet and was informed by a neighbor who saw the dog carrying his bag of food roaming the area.

Tiele then said that Otis was supposedly on his way home when she captured the photo. The dog fortunately had a sweet reunion with his owners shortly thereafter.