A teacher should be a good example to his or her students; at the same time, students should respect their teachers, but it’s not always the case, especially for an educator and his students in China.

An all-out brawl started inside a classroom when this unidentified teacher forced to collect one of his students’ test paper. The incident was all captured on camera; the footage was uploaded to Chinese website Weibo and quickly went viral, as reported by Yibada.

According to CCTV News, the student refused to hand over the test paper. On the other hand, the teacher didn’t like the student’s attitude and grabbed him by the collar.

Just then, another student seemed to come to his classmate’s rescue and threw out the first punch to the male educator. This then resulted in a chain reaction from more male students jumping into the brawl.

The teacher was pushed to a corner where he was beaten up by the students. Eventually, it cooled down but one student remained and the teacher was seen slapping him on the face. And then another violent uprising from the students started. This appeared to happen for another instance before the video was cut. 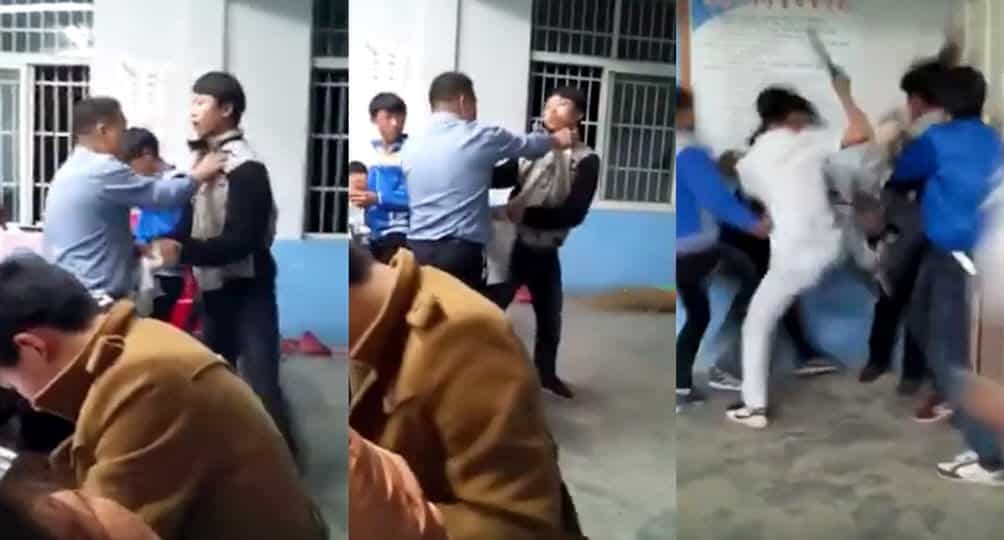 Fortunately, no one was seriously injured and class is back to normal.

A former student described the teacher in the video to be a “very professional English teacher” who is also “responsible.” However, it has become a common situation for a Chinese to hit someone out of being provoked. This has also become a favorite subject of viral videos.

Police are now looking into the matter while the principal of the school, Zhang Mujiao was reportedly suspended due to the posting of the incident, as reported by the City Star newspaper. Zhang admitted about the incident but didn’t give an explanation on how he handled the situation.

Check out the video of the brawl below.