Forklift operators may sometimes find it a challenge to maneuver in cramped spaces. It would probably be more convenient if their vehicles will allow them to move in any direction without turning to save more time and effort. Conventional wheels are not designed for such movements. Fortunately, the OMNI-directional wheels are far from ordinary.

These fork trucks and aerial lifts with OMNI-directional wheels were designed to help forklift and scissor lift operators move in and around warehouses with ease. 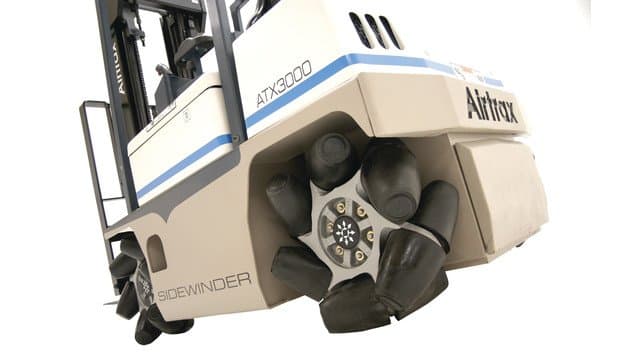 An American based company called Airtrax, was the original designer and developer of the revolutionary ATX-3000 — “the first commercially produced Omni-Directional Lift Truck in the world.” They introduced the concept in 2000 and manufactured the vehicle from September 2005 to March 2006.

The company only sold them until 2008. They ceased all operations due to lack of funding that same year. Airtrax created prototypes of vehicles such as the Cobra line of Aerial Work Platforms, although none of those were ever assembled or sold.

In 2010, Vehicle Technologies, Inc. (VETEX) continued production of the ATX-3000 under license, but they deferred product assembly in June 2013.

Without a doubt, the technology works very well, but the vehicles were probably too expensive compared to regular machines.