Cheating surely has its consequences and for this unlucky Chinese guy, it’s seeing his luxury car hammered. Like literally.

As you can see on the video below, one furious wife decided to channel her inner Thor and used a hammer to vent her anger after allegedly discovering that her husband was having an affair with a third party. The poor victim? The guy’s expensive BMW vehicle.

The wife repeatedly smashed the BMW car with a hammer after catching her cheating husband. 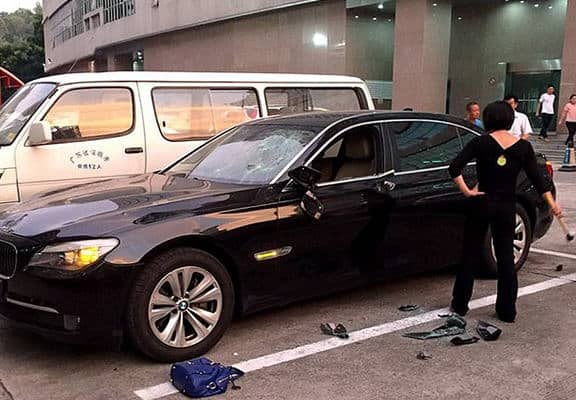 Astonished bystanders watched her violently strike the windows of the car and one of the guys even managed to film her in action. According to reports, the woman believed that her husband and his mistress even did their lascivious acts in the car. So when a security guard attempted to stop her, she simply said:

“This is my car, it’s none of your business. This car is too dirty, a car that’s used by a whore is too dirty. Who’s going to open the bonnet for me? I want to smash the inside.”

I don’t know about you but having an idea of how much that car costs, I definitely squirmed with every hit.

Still, the guy probably deserved it. Although to be fair, if you’d scroll down the comments on YouTube, you’ll see a lot of netizens are also expressing disapproval of the woman’s methods.