Screening for some 17 diseases has never been this fast and efficient.

A device invented by a multinational team of scientists can detect 17 diseases through analyzing patterns of exhaled molecules. The technique of assessing a patient’s breath to diagnose an illness is an ancient practice, dating back from about 400 BC. Physicians then can determine a patient’s disease based on the odor of one’s breath or of the body fluids.

The team, led by scientist and engineer Hossam Haick from Technion−Israel Institute of Technology, notes that:

Since antiquity (∼400 BC), physicians learned to evaluate their patients by exhaled volatile organic compounds (VOCs), among other means, that are linked to diseases. For example, the stools and urine of infant noblemen were smelt daily by their physicians. This approach rests on the fact that a compendium of VOCs with relatively low molecular weight expresses distinct and immediate changes as a consequence to pathophysiological processes occurring and altering the body’s metabolism. Experimental findings show that VOCs can be detected directly from the headspace of the affected cells, blood, exhaled breath, and/or other body fluids.

So how does this device work?

The invention utilizes artificially intelligent nanoarray technology that “relies on cross-reactive (i.e., semiselective) nanotechnology-based sensor arrays, using pattern recognition,” consequently detecting unique ‘breathprints’ that correspond to a disease, and quite possibly, its classification. Put simply, each time a diseased patient exhales, specific types of molecules are released. It is this specificity in molecular composition that allows the device to identify the disease process.

How a breathprint is formed

“A total of 2,808 breath samples were collected from 1,404 subjects having one of 17 different disease types that had been put into three main categories (cancerous, inflammatory, and neurological diseases) and one group of uncorrelated diseases, as well as a group of healthy controls.”

They found out that each of the 17 diseases that they were trying to identify registered different “breathprints.” The diseases include:

On why it is more practical to study a patient’s breath as compared to other body fluids, the team explains:

“Of these body fluids, exhaled breath is the most accessible and useful VOC source for monitoring bodily health and disorder. This is because exhaled breath is easily and noninvasively accessible; it is suitable for high compliance; it provides a matrix of relative low complexity, and it can be handled safely and repeated as frequently as desired.”

Researchers have discovered unique molecular compositions of 17 diseases based on breath analysis. 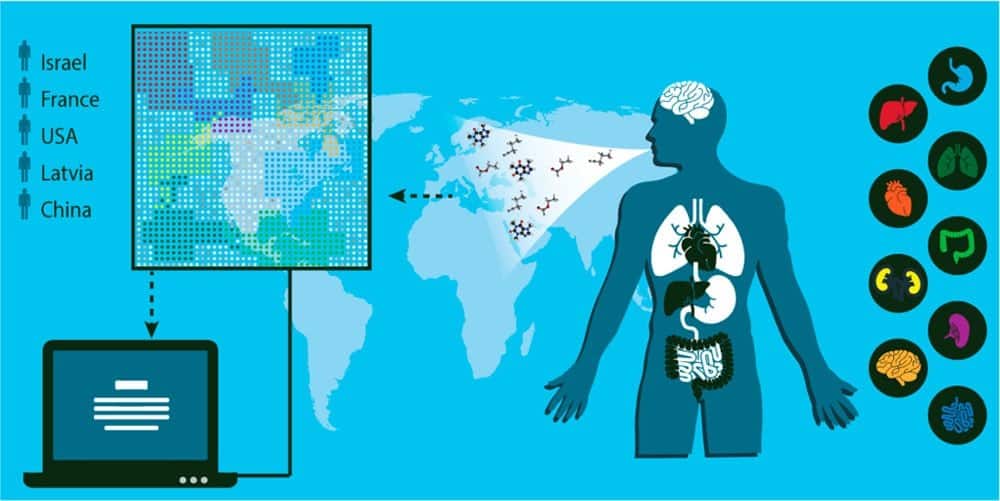 The group further tells us:

Consequently, the presence of one disease would not screen out others—a prerequisite for developing a new generation(s) of biomedical devices for personalized diagnosis and classification of diseases in a noninvasive, inexpensive, and portable manner. The artificially intelligent nanoarray had a low or no vulnerability to clinical and demographical confounding factors.

Further research and tests are required before this device is used for a larger population of patients. Ultimately, what we are hoping for is a device that can rapidly and correctly diagnose a patient’s condition, consequently facilitating prompt and effective treatment and improving patient outcomes.

The study has been published in the journal ACS Nano.