The best thing about our planet is that we learn new things every day. People are discovering new species of plants, animals, and insects on a regular basis. Interestingly, the Bunny Harvestman was discovered a long time ago. However, it is currently driving people nuts with its adorable puppy appearance, thanks to photos taken by a scientist.

Andreas Kay has been taking photos of the unique creatures living in Ecuador’s Amazon rainforest. Although all of the critters are interesting in their own way, one insect captured the hearts of netizens. After all, it looks like it’s wearing the head of a perky-eared black dog.

Why does this spider look like it has a dog’s head for a hat? 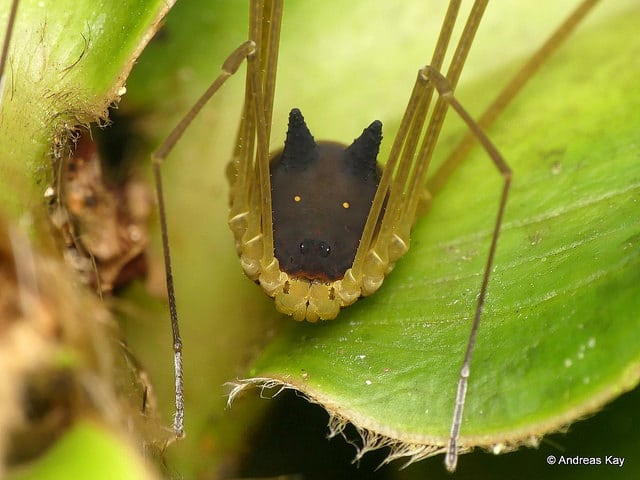 Actually, this isn’t a spider. The Bunny Harvestman is actually a species of daddy longlegs. The creature’s scientific name is Metagryne bicolumnata, from the family of Cosmetidae, in the order of Opiliones. It was discovered in 1959 by arachnid specialist Carl Friedrich Roewer, who decided that its strange body resembled a bunny instead of a dog. Nevertheless, netizens insist that the Bunny Harvestman should be called Spider-Dog or something to that effect.

Kay offered some interesting facts about the creature.

“Contrary to a common belief Harvestmen do not have venom glands and are absolutely harmless. Harvestmen have been around for at least 400 million years and lived even before the dinosaurs.”

The arachnid waves to its new fans. 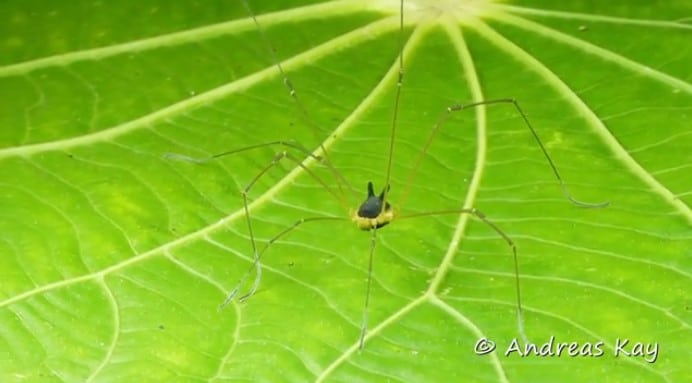 The scientist is unsure why the Bunny Harvestman evolved to its current look. It is possible that the creature evolved this way so it can look bigger and more menacing to possible predators. The orange dots which resemble eyes are not the arachnid’s own eyes, which are actually what looks like the nostrils on the dog’s head.

It might look menacing but the Bunny Harvestman is actually really tiny. One of Kay’s pictures shows that it is about the size of the scientist’s thumb. Nevertheless, the arachnid can still be aggressive when provoked.

Get a closer look at the unusual creature here: