The timeless story of Disney’s Beauty and the Beast has been retold, thanks to Emma Watson and Dan Stevens, and of course to the rest of the film crew. But, did you know that this magical story isn’t merely a figment of a storyteller’s imagination? You see, it is based on an actual love story – one that proves beauty is only skin deep.

Meet Pedro Gonzales. Born in Tenerife, Spain in 1537, he did not grow up to be a normal-looking kid. He grew thick hair all over his body, earning him the reputation of being a “wildman,” a creature from European medieval mythology described as ‘half-man and half-animal.’ These wildmen were believed to turn into ferocious beings when the night falls; they sometimes even eat children alive.

Pedro’s story began on the night of King Henry II’s coronation in France during the mid-16th century. He was presented as a gift to the king – a caged “wildman” at the royal’s disposal. His presence caused excitement among all the people present and he was then kept in the castle’s dungeon for observation.

A portrait of Petrus Gonsalvus, painted by an anonymous artist.

While in the dungeon, doctors and academics examined Pedro and they found out that he was no wild man. He was, in fact, a normal 10-year-old boy with too much body hair – a condition known to us today as congenital hypertrichosis. His condition, which is also called “werewolf syndrome,” was rare, with only about 50 documented cases during the Middle Ages and Pedro being the first.

During that time, people with physical irregularities were perceived as status symbols of the wealthy people than as human beings. Thanks to his condition’s rarity, the king saw Pedro as a prized possession. And, as an experiment, he was educated as a nobleman and was allowed to keep the Latin form of his name – Petrus Gonsalvus. They discovered that Petrus is a fast-learner, being able to master three languages quickly. Eventually, Petrus was able to hold a court position.

Petrus was turned into a nobleman, thanks to the Court’s experiment. 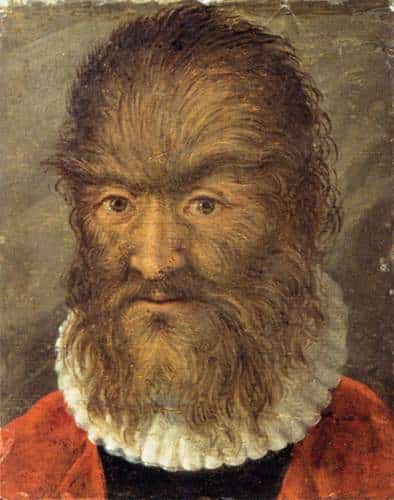 In 1559, King Henry II died due to a jousting injury, leaving behind his widow, Catherine of Medici. Catherine wanted to see if more “wildmen” will be produced if Petrus gets married and has kids so she decided that he should marry. She chose a beautiful woman also named Catherine, daughter of a court servant, to be his wife. Both she and Petrus did not set eyes on each other until the wedding ceremony.

The events of their wedding ceremony remain unknown, but speculations that the Queen’s doctors spied on the couple on their first night remain. Apparently, they wanted to find out if the “Beast” will indeed turn into a beast during sexual intercourse and if he did, if the “Beauty” will be able to survive it.

To everyone’s surprise, “Beauty” ended up falling in love with the “Beast” and the two happily settled into married life. But, the Queen was disappointed when Petrus’ first two sons with Catherine did not inherit their father’s “hairy countenance.” The couple’s succeeding children, two sons and three daughters, inherited the “werewolf syndrome,” though, much to the Queen’s delight.

Petrus married Catherine and they had seven kids, five of which have hypertrichosis. 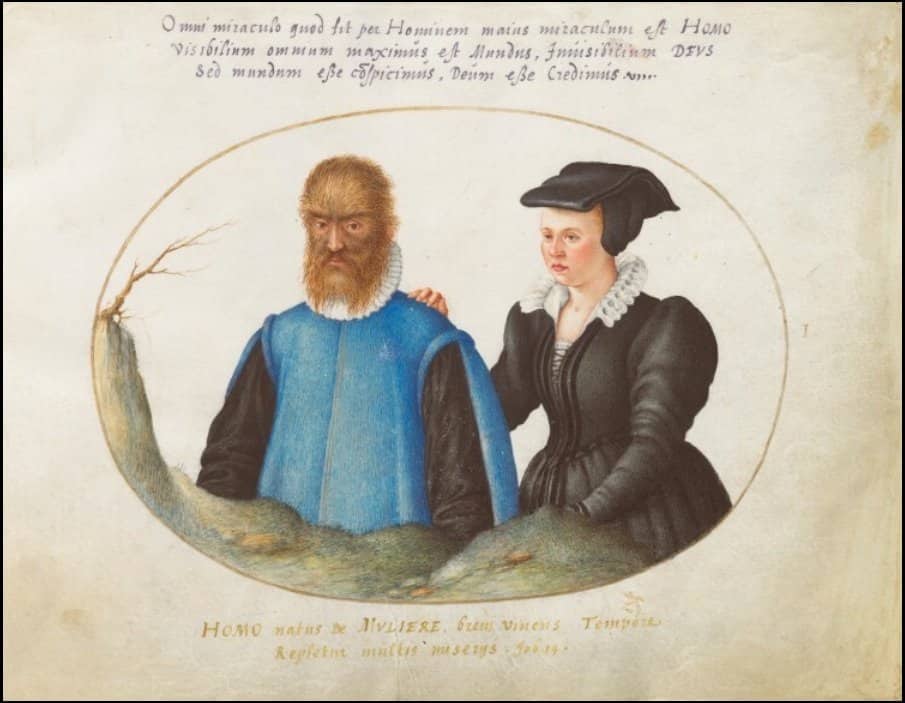 Petrus’ family gained more popularity and were allowed to travel around Europe and live with other nobles. They eventually decided to stay in Spain, where they were supported by the Duke of Parma. The Duke allowed Petrus to run an estate within close proximity to Parma. However, his children with hypertrichosis were given as gifts to other well-known families. His daughter, Antonietta, even became a plaything of the Duke’s mistress. It was not easy for the gentle-hearted couple to have their kids sent away and to be treated as objects, but there was nothing that they could do.

Petrus and Catherine finally settled at Lake Bolsena in Capodimonte, Italy, where they spent the final years of their lives in peace. Petrus was known to have attended his grandson’s christening in 1617, then died the following year. Catherine, on the other hand, was said to have died in 1623.

It is just deeply saddening that in spite of being a gentle and loving man and a devoted father, Petrus was denied anointment on his deathbed due to his appearance. This meant that he could not be buried in sacred grounds. Until the end of his life, he was not treated like a human being but more like an animal.

Sadly, the real story behind “Beauty and the Beast” did not have a fairy tale ending.